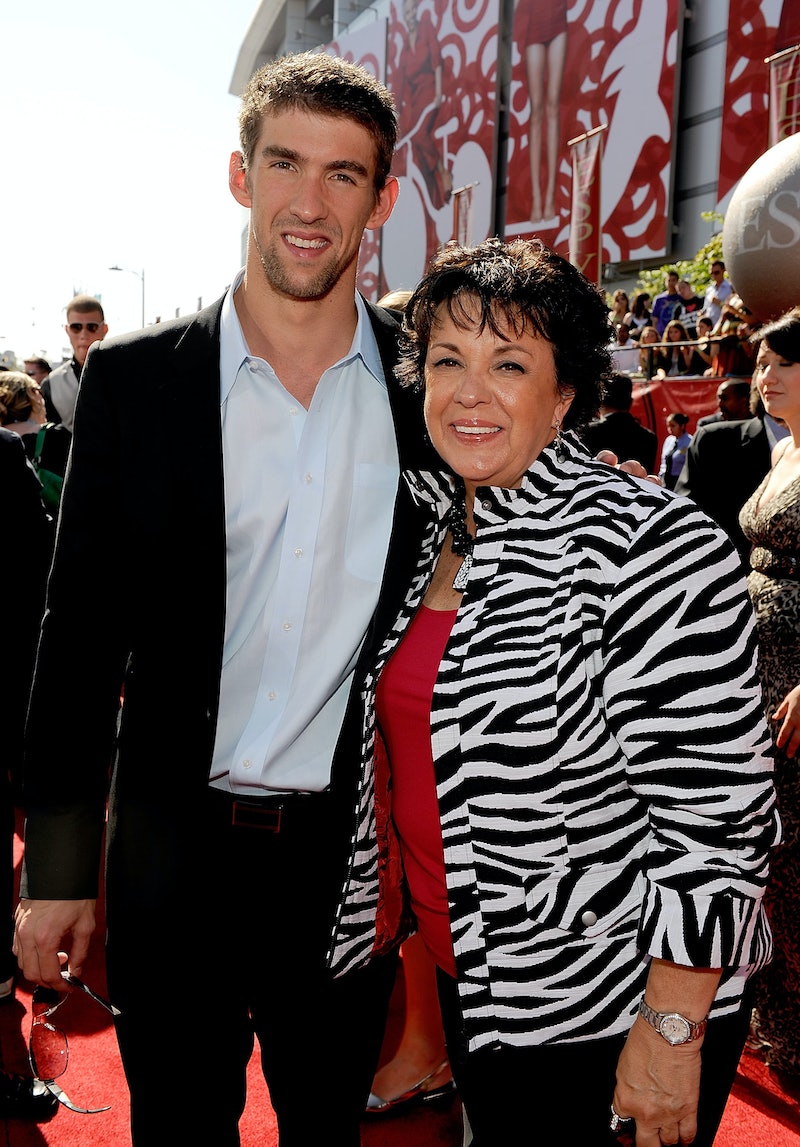 If you consider yourself Michael Phelps' biggest fan, you may want to rethink that, because these photos of Michael Phelps' mom, Debbie Phelps, prove that she is actually her son's biggest supporter. No matter the location of any swimming event, including the 2016 Olympics being held in Rio de Janeiro, Brazil, you can count on seeing Michael's mom in the audience rooting for her son. She is constantly proud of him, his successes, and how he continues to grow as a person, father, and professional swimmer.

For those who've tuned into most of Michael's races, you know that Debbie has some of the best reactions to watching her son swim. Her facial expressions are even more on point when he wins. It's clear she loves seeing him in action, and who can blame her? In a 2012 interview with Parenting, Debbie opened up about what it's like sitting in the stands and watching Michael swim. "I’m thinking, Wow. It’s this incredible sense of your child meeting his goals, the pride that you have in your country for something that your child was able to do representing the United States of America."

Her pride for Michael's success is also evident across her social media accounts, where she shares photos left and right of him. Below are just a few of the pictures taken of Debbie and some she's posted herself. I can only imagine there will be even more once the Summer Olympics begin.

Her Olympic Gear Is Ready

Debbie will forever be "Team Phelps."

Her Tear Tears Of Joy

Michael's birthday is an even more special day for his mom.

He Deserves All Of The Love

She can't help but congratulate him with kisses.

She Cherishes The Memories

How many boxes do you think she bought?

Her Hugging Is On Point

That hug couldn't get any tighter.

She Loves Michael As A Father

Debbie can't help but gush about her son as a dad.

Her Pride Goes Above & Beyond

She just can't wait to see what he does next.

I told you she is his biggest fan.

More like this
Jake Daniels Just Became The UK’s First Active Football Player To Come Out As Gay Since 1990
By Sam Ramsden
What Is Jeanie Buss' Net Worth? The Lakers President Is Uber Rich
By Hugh McIntyre
Kylie Jenner Roasts Kendall For Her Cucumber Cutting Skills On TikTok
By Jake Viswanath
Halsey Calls Out Label For Asking Them To "Fake A TikTok Moment" For New Song
By Jake Viswanath
Get Even More From Bustle — Sign Up For The Newsletter