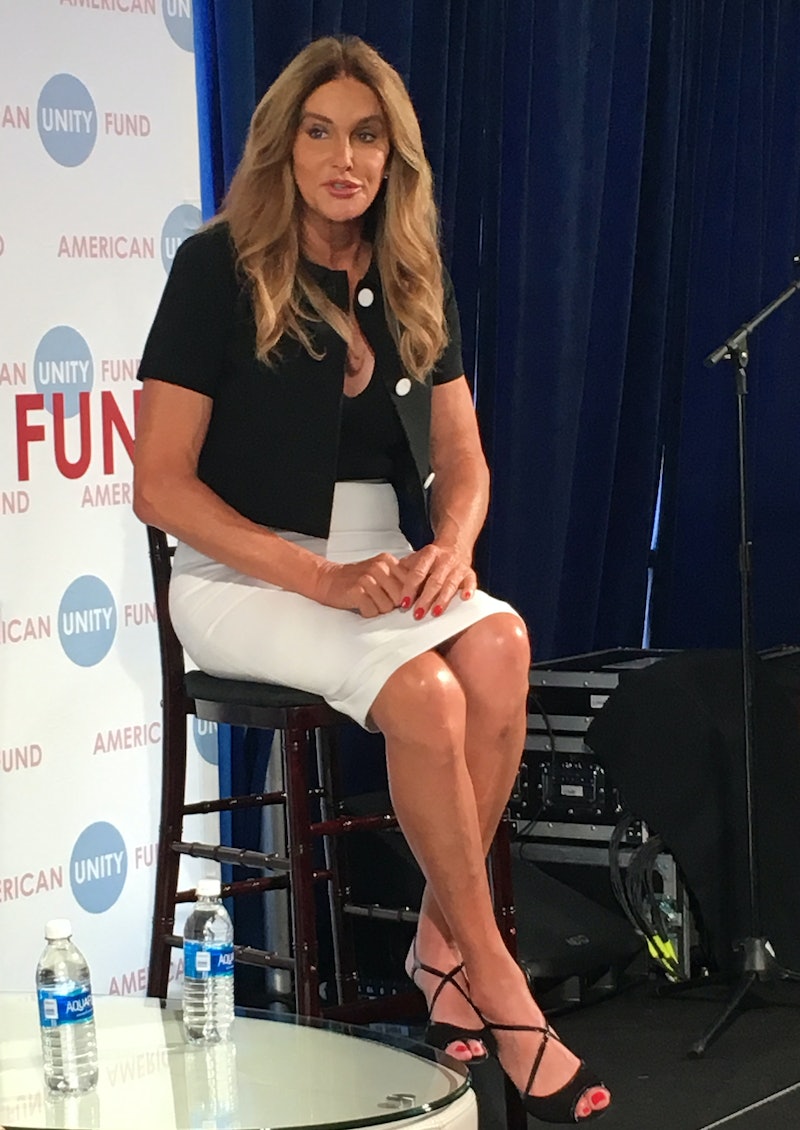 On Wednesday, another prominent Republican refused to endorse Donald Trump — though the move was substantially less controversial than when it was pulled by Ted Cruz at the party's convention in Cleveland. In fact, Caitlyn Jenner admitting she has not "outwardly supported anybody" in the presidential race was about the least controversial thing she could have said, which fits in nicely with her history of toeing the line when it comes to politics. It's pretty clear that Jenner doesn't "outwardly support" Trump, or much else, until she's forced to.

One of the few political positions Jenner has stuck with is her identity as a Republican. On HBO's Any Given Wednesday this week, Jenner told host Bill Simmons that she believed, "the Republican side... has a better opportunity to bring this country back to ... as close as you can to what it was." When asked if she supported the Republican presidential nominee, Jenner said "no." Then, instead, she offered, "I have not outwardly supported anybody. I am here to help [...] the entire Republican party do a better job when it comes to LBGT issues."

This abdication may come as a surprise to those who caught Jenner's appearance at the Republican National Convention in July, where she expressed optimism about the future of the country and the Republican party's evolution on LGBT issues. Jenner said at the convention that she's been "very disappointed over the last five, 10 years" with the party's approach to social issues — which actually suggest she might've been warming to Trump. As openly gay Trump delegate Charles Moran pointed out to Bustle last month, Trump has a surprisingly progressive record on LGBTQ issues.

And Jenner seems in many ways to be pro-Trump. She famously made a video taking Trump up on his offer to use whichever bathroom she chooses in Trump Towers after he came out (somewhat apathetically) against the North Carolina bathroom bill. Also, on her show I Am Cait in March, Jenner said Trump would be "very good for women's issues," though her main elaboration on that point was, "I don't think he's out there to destroy women or takes things away or do any of that kind of stuff."

No matter what her true feelings on Trump may be, Jenner's reticence to publicly take a political stand should be somewhat expected — she has experience skirting around issues. In September 2015, in Jenner's infamously awkward interview on The Ellen Show , she revealed to host Ellen DeGeneres that she "liked tradition," but could be OK with gay marriage if "that word 'marriage' is really, really that important to you." It was only after she received record levels of flack that she "clarified" her thoughts in a post on her blog, and made the much less ambiguous statement that "everyone should be able to marry the person they love."

Is an awkward interview on The Ellen Show what's required to get Jenner to make up her mind on Trump?