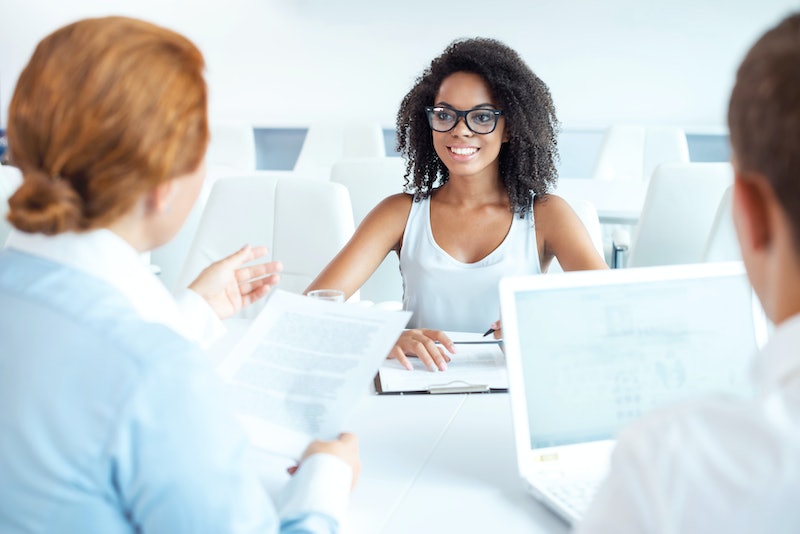 No matter how prepared you are for a job interview, there's one question that everyone dreads. You know what I'm talking about — because seriously: How do you answer "What's your greatest weakness?" It's a query that comes up without fail, but as much as it might make you cringe inside, it's one you really want to ace. And as Melissa Dahl explains over at Science of Us, it turns out that honesty might just be the best policy here — even when you think it isn't.

No matter what job you're interviewing for, a variation of this question is likely to come up. It might be when your prospective boss asks you about a time that you've "failed" at a task, or when they ask you to describe a scenario where your best laid plans have gone awry. The core of these questions are the same: They're asking you to admit a flaw or weak area that you very well may bring into their workplace.

Of course, the standard advice for this question is to turn your "flaw" into a strength — basically playing with your words and phrasing to turn your "mistake" or "failure" into a positive attribute, either showing how you came through the rough situation and are now stronger, or addressing skills or coping mechanisms that you might have developed since then. You might even be tempted to take something that's actually a positive attribute and frame it as a negative — something like "being a perfectionist." This tack is pretty standard interview advice; indeed, I've been hearing it repeatedly myself since high school, and I'm pretty sure I'm not the only one.

According to recent research, however, it appears that the best response to give to the question of your own weaknesses is an honest and accurate one. For example, in a 2015 study conducted by the Harvard Business School, researchers found that when undergraduates "humblebragged" about their weaknesses, they were less likely to be seen in a favorable light by their interviewers. Less than a quarter of the participants answered with actual negative qualities, such as procrastination — but these participants were seen as more hirable by about 30 percent.

Of course, this sort of honesty does go against a lot of what we've been taught by career coaches and guidance counselors for years: Aren't we expected to turn out weaknesses into strengths? Who wants to give an employer a reason not to hire them? But as it turns out, being able to correctly identify weaknesses in yourself is something employers look for

As workplace expert Lynn Taylor at Psychology Today explains, showing that you are self-aware enough to know the areas in which you can improve shows that you are a mature worker, and not being overly self-critical shows that you are confident and graceful in awkward situations. She advises job candidates to be honest, but not to self-sabotage; admitted a flaw doesn't mean you need to ramble excessively or give detailed, overly specific examples of your failures.

At the end of the day, it's important to remember that no one is perfect. In fact, the person interviewing you knows that neither you nor anyone else is not perfect — and indeed, honesty and self-awareness can be refreshing in a world where so many people feel pressure to look absolutely flawless all of the time.

Of course, balance is key here: While you can be honest about a weakness or failure, you don't want to beat yourself up or appear self-deprecating in an interview. This is exactly the sort of answer you'll want to practice before an interview, so you can ace your body language, tone, and delivery. While sometimes it can be stressful, it looks like interviewing is just another place where honesty is the best policy.