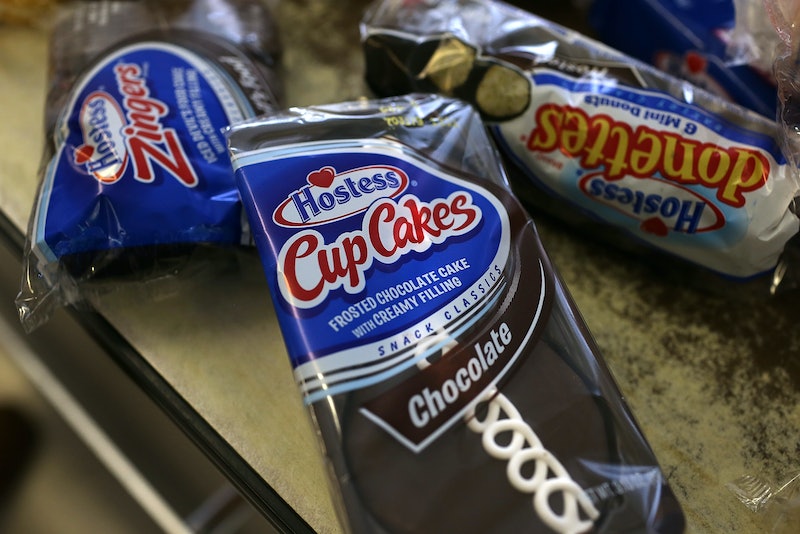 “Did you hear?” My mother asks, breathless. She sounds panicked, near tears, and I imagine the worst — a heart attack, car accident, death in the family.

She takes a deep breath. “Hostess is going bankrupt.”

I gasp, and my roommate, concerned, mouths Are you okay? I turn away and cover my mouth.

“They’re laying everyone off and closing down. Everything — the cupcakes, the Twinkies, all of it — will be gone,” my mom moans.

My mother explains the gruesome details: There will be a bidding war to see if the brands can be salvaged; packages of Twinkies are already selling on EBay for thousands of dollars; and slowly but surely, the cupcakes that have defined my mother’s life, as well as my own, will be no more.

"Tomorrow," I said, frightened by the weight of the word. My mother shook her head and passed me a cupcake. "Tonight."

When I think of my mother, I think of Hostess Cupcakes. I think of my grandmother’s kitchen table, hundreds of chocolate fingerprints coating its underbelly, a permanent reminder of my mother’s obsession. As a child and pre-teen, she ate two cupcakes in the morning, two more in the afternoon, and another two before bed. She did this every single day for almost seven years, and yet she barely weighed 90 pounds.

She ate other foods, too — pasta, chicken, and a few mouthfuls of vegetables when under orders from exasperated parents — but mostly, she ate cupcakes. There was no real reason for the obsession, no rational explanation. My mother simply loved the taste of Hostess Cupcakes, and blessed with a figure that earned her the nickname Olive Oyl, she happily ate them to excess.

By the time I was born, my mother had learned her lesson. Although her own parents had failed to limit her dessert intake (a decision that even today makes my grandmother question the sanity of her youth), my mother limited our family’s cupcake consumption. Hostess were relegated to weekends and “special occasions;” a broad label that covered birthdays and holidays, yes, but also the occasional hungry Tuesday night. I ate cupcakes the way a child should eat dessert — in (relative) moderation.

My mother, having lost the lightning-fast metabolism of her adolescence, now saved her cupcakes for occasions few and far between. On the rare night she opened the refrigerator drawer and pulled out the box, she’d wave me over to the kitchen table.

“I had these every day when I was growing up,” she’d tell me as if I hadn’t heard the story a thousand times before. “Two for breakfast, two for lunch, two more for dinner… I don’t know how my parents let me.”

I had no idea, either. I could only dream of a household where cupcakes could substitute for tuna fish sandwiches and PB&J. I salivated over the figure eight of white frosting, the thick cakey underbelly, the hidden vanilla center only uncovered after several bites.

On cupcake nights, I would watch my mother unwrap her dessert, passing me one to eat alongside her. While I eagerly tore mine apart, biting into the chocolate icing and letting the vanilla creme filling decorate my chin, my mother took her time. She savored her cupcake, each bite focused and deliberate.

“You’re eating the bottom first?!” she’d notice in horror, watching me ravage the cupcake with unnatural speed. “You can’t do that!”

I didn’t understand why it mattered. As a kid, a Hostess cupcake was a dessert like any other, meant to be consumed as quickly and in as much volume as possible. To my mother, who spent her childhood literally surrounded by cupcakes, unwrapping a Hostess was like greeting an old friend.

“Mmm,” she’d sigh when the meal was complete, “Wasn’t that delicious?”

Yes, I agreed, it was. “Can I have another?” I’d ask, and my mother would sigh again and shake her head, her only child obviously not understanding the significance of the Rare and All-Important Hostess Cupcake.

Sometimes, my father would eat with us, but most times, he’d pass, in possession of a self-control my mother and I apparently lacked. Every time, my eyes would meet hers and we’d share a knowing smile that said, He just doesn’t understand.

Sometimes, it seems as though at every major moment of my life, cupcakes were present. They were eaten on every birthday and anniversary, each sick day and summer vacation. They were even in her hospital bag when I was born, smushed in between diapers and a change of clothes. After suffering through gestational diabetes she explained that “those tasted extra special, because they had been denied to me for so long.”

There were cupcakes on the eve of my Bat Mitzvah, the long-awaited event that culminated ceaseless months of Hebrew School lessons and the emptying of my parents’ bank account. In-between bites, I practiced my haftorah portion; the reading that would mark my supposed transition from child to woman. My mother read aloud the speech she would soon give to our family and friends, spilling crumbs on the pages as she looked up synonyms for proud.

In my senior year of high school, when I got into college for the first time after months of stressful effort, we celebrated with Hostess.

“Congratulations,” my mother said, smiling widely as she thrust her cupcake in the air. “To the first of many.”

I matched her grin, met her cupcake with my own, and together, we toasted to the brightness of my future.

And on the last night before I left for school, the car filled with suitcases and the air heavy with goodbyes, we reached into the cupboards and unwrapped our desserts in silence.

“Tomorrow,” I said, frightened by the weight of the word.

My mother shook her head and passed me a cupcake. “Tonight.”

But Hostess cupcakes weren't only for celebrations. The day my mother lost her job, I came home from my own part-time job to find her sitting at the table, a box of Hostess Cupcakes open before her.

“How are you?” I asked tentatively, unsure of what to expect. She took a bite of cupcake and swallowed slowly. After a moment, she said, “I’m okay, I think,” and I knew then she was telling the truth.

On the phone, my mother and I talk strategy. We brainstorm the most practical ways of hoarding cupcakes before they all disappear. We have moved past the initial shock and are now in planning mode. We cannot bear the thought of Hostess disappearing from our lives; it’s too central, too important. Like our shared hatred of sports and love of Gilmore Girls , Hostess Cupcakes are an essential part of our relationship. Rationally, of course, I know that we’ll be just fine without them — but I can’t help but wonder about what’s to come.

For the next six months, we follow the news with baited breath, noting every twist and turn in the Hostess saga. We feel sadness when the company sells off their warehouse and machinery in January; cautious optimism when buyers are announced in March; and then, finally, in June, elated relief when it’s reported that Hostess will be back on the shelves in a few weeks time.

During Thanksgiving break, nearly a year after that first horrified phone call, I come home from college to discover a half-dozen unopened boxes of Hostess cupcakes neatly stacked in our kitchen cabinets.

“You found them!” I cry in disbelief.

“The last ones in the store,” she says proudly.

We grab a box, sit down at the kitchen table, and unwrap our snacks, the familiar crunching of the wrapper signaling that I am home.