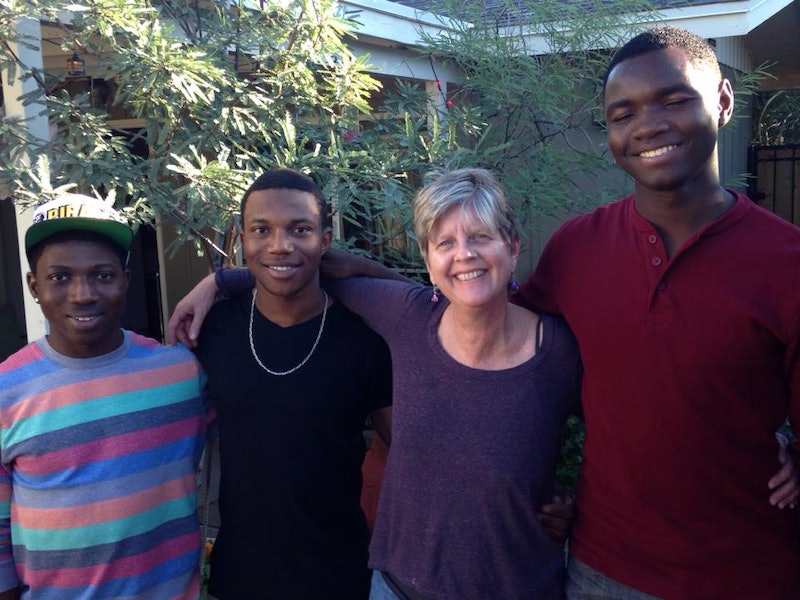 I remember the first time my mother brought up the idea of being a foster parent. We were eating dinner, and she was telling us about a mother and baby at the hospital where she was a nurse practitioner. The mom was very young, and the baby's left lung had collapsed soon after she was born, leaving her unable to breathe except through a tracheostomy. The birth mother couldn't take care of the baby, and my mom floated the idea of our family caring for her.

I was four when that baby, my little sister Jacinda, came to live with us. I was five when she died.

It was difficult for my biological sister and me, of course, but I can't imagine what it did to my parents, for whom Jacinda was truly one of their own children. We grieved for a long time, but for my parents, the desire to provide a home and a loving family to children in need stuck. Soon, a little girl named Rochelle, who had severe cerebral palsy, became yet another sister. Her stay was short: happily, her mother was soon able to take her back. Still, we all felt that she was part of our family.

When we moved from the extremely small northern Arizona town I grew up in to Phoenix, our family waited about a year before getting involved in foster care again. This time, instead of taking care of young children with disabilities, my parents worked with Catholic Charities, an organization that helps resettle refugees. This includes a program that places unaccompanied minors in foster homes. Soon, I had two new brothers from Haiti. My brothers lived with the family until they turned 18, and they are in and out of the house still.

my mother has always needed to go a step further in easing a bit of the suffering in the world. She invites that suffering, the bodies experiencing it, into her home — for better, and sometimes, for worse.

If I am making it sound easy, or idyllic, for my family to live out my mother’s personal vision for saving the world, believe me, it was no such thing. The boys entered my life at a difficult moment — I was just hitting puberty, and struggling with what would grow into full-blown and chronic depression. I needed my mother badly, and sometimes, the needs of the newer members of our family trumped (or at least seemed to) those of her biological children.

At times, we formed uneasy truces rather than dealing directly with conflict. Often, my siblings’ needs crashed violently against one another, and sometimes, I think we really hated each other, and resented all being made to live under the same roof. I was angry about the interruptions in my mother’s attention, and my brothers had to deal with all the attendant issues of having spent their early years in extreme need.

We had to make hard choices and complicated compromises to keep our weird family functioning — decisions like allowing the elder of my brothers to attend military school in Georgia when it became clear the structure of our family life wasn’t suiting him. This was hard for many reasons: it felt like a failure and like sending him away, and it also required navigating a mess of red tape with the social services organization.

We didn’t know if we were succeeding in taking care of each other. But my mother kept opening our home, and as a family, we kept pushing through that uncertainty.

Since my brothers from Haiti came to live with us, there have been other, shorter-term siblings. One boy came from Somalia, another from the Sudan. My Sudanese brother still comes over for dinner and to play with my parents' dog. These young men have enriched my life and made me understand the world better. I don't know firsthand what it's like to be starving, and scared, and fleeing something monstrous, but I have learned something about those experiences — more than I think I every would have without my many brothers.

As if being a foster parent wasn't enough, my mother has also worked in a New York City emergency room, piloted a program to support pregnant and parenting teens, and provided mental health support after Hurricane Katrina. It's never been enough for my mother to simply donate to charity, participate in walks and runs, or even volunteer just some of her time.

All of those are lovely gestures, and people make a difference through such gestures every day. But my mother has always needed to go a step further in easing a bit of the suffering in the world. She invites that suffering, the bodies experiencing it, into her home — for better, and sometimes, for worse. But she never stops giving.

I am not sure yet how I am going to put her lessons to work in my own life. I have dabbled in volunteer work that I hope my mother would be proud of. But too often, the work gets too hard, and I abandon it. I let people down; never able to help them as much as they need — or, worse — as much as I could. I have more to offer than I actually do. I am not a strong or brave enough person yet to do the amazing things my mother does. I am not able to house and heal so much suffering.

But because my mother is my hero, someday, I hope to get there. After all, I have learned from her firsthand that we are never helpless against the immense needs of our world. We never need sit idly by. Indeed, we can't.

More like this
The 19 Best Tweets & Memes About Bisexual Awareness Week
By Lexi Inks
This Psychological Effect Might Be Keeping You From Hitting Your Goals
By Lexi Inks
10 Ways To Be More Empathetic To Your Partner
By Raven Ishak and Lexi Inks
Think Your Partner Is Cheating? These Tarot Cards May Confirm Your Suspicions
By Kristine Fellizar
Get Even More From Bustle — Sign Up For The Newsletter