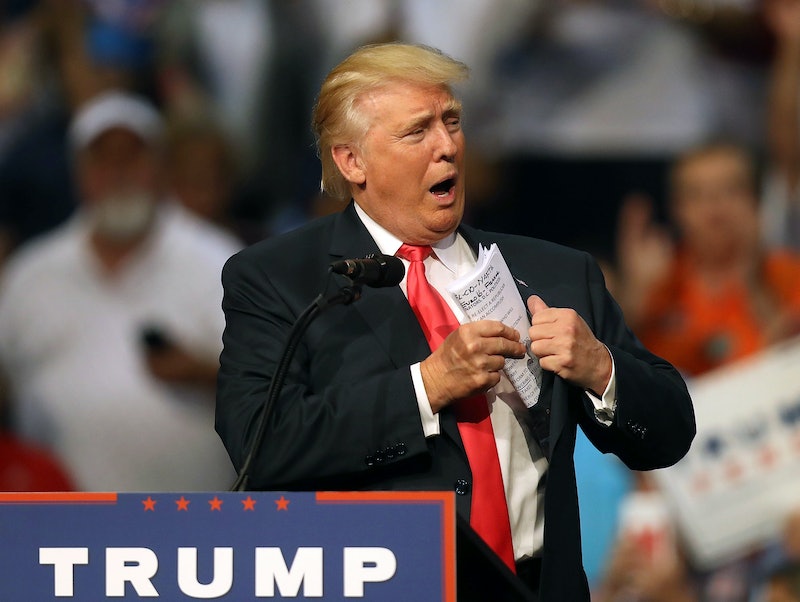 If you don't like your reality, make it up! That seems to be the convenient motto of the Republican presidential nominee whose "nothing to see here" attitude in the midst of his 10-car-pile-up of a campaign is confounding many. But what happens if the truth catches up with him and looks him in the eye: Will Donald Trump drop out if he's losing?

If Trump were to make a decision to drop out of the presidential race because he was losing, he would first have to acknowledge that he's losing. On Thursday, two polls came out that should be making Trump's presidential odds depressingly clear: A WBUR/MassInc poll shows Trump losing New Hampshire to Clinton by a whopping 15 points, and a Franklin & Marshall College poll in Pennsylvania shows him losing the critical swing state by 13 points. Ouch. However, based on his Twitter account, Trump thinks things are A-OK. A day before these polls came out, the GOP presidential Trump insisted in a tweet, "There is great unity in my campaign, perhaps greater than ever before," to which celebrity model Chrissy Teigen brilliantly replied with only the headline of a CNBC report, "Ally of Trump Staffer Paul Manafort: The Staff Is 'Suicidal,' He's Mailing It In."

Despite the overwhelming evidence that there seems to be a some discord within not just his campaign, but his entire party, Trump remains, at least publicly, in denial.

It suffices to say that the entire year-and-change-long ride has been pretty bumpy, but especially recently, the tides have not turned in the candidate's favor. The Trump campaign has caught fire in the past week alone when he tripled-down on disparaging remarks against the Khans, a Cold Star family and refused to endorse leading Republicans John McCain and Paul Ryan in their respective primary races. Throughout much of his campaign, he's avoided the high road, even alluding to the size of his penis at an official Republican debate.

So what will Trump do? The candidate is anything but predictable. Some think he might do anything to avoid being a "loser," since's he's insisted time and again he's not a "loser" — while concluding that pretty much everyone else is. Trump will, ultimately, have the final say on whether he drops out in the face of terrible polling numbers, but there are reports that Republican leaders may try to dump Trump. ABC News' Jonathan Karl reported that "senior party officials are so frustrated ... they are exploring how to replace him [Trump] on the ballot if he drops out." But of course, the nominee would have to withdraw on his own first — and there's no sign he wants to stop the Trump train yet.