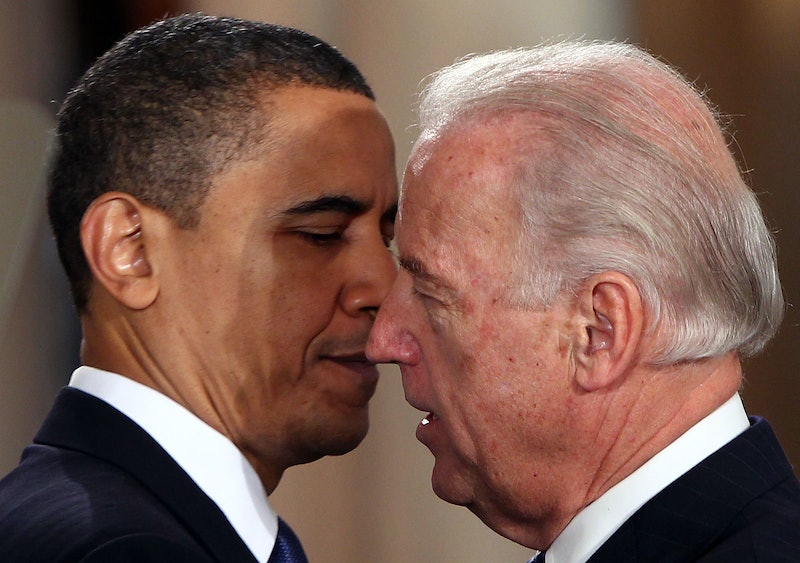 Everyone likes to show a little love to their best friend on his or her birthday, and it's already an established fact that President Obama has the best best friend, ever: his vice president, Joe Biden, of course. In honor of POTUS' birthday on Aug. 4, Vice President Biden posted a photo on his Twitter of the friendship bracelet President Obama made the vice president, and the two officially became best friend goals. In the photo are two intertwining braided bracelets, one reading "Joe," and the other reading, "Barack." The vice president's tweet included the caption, "Happy 55th, Barack! A brother to me, a best friend forever." It's OK, I'm gushing, too.

It was actually the president who first revealed the set of friendship bracelets back in June — in a video meant to highlight the importance of voting, POTUS attempted five different activities that he finds far more difficult than registering to cast a ballot this November. One of those activities was making friendship bracelets. Yet, no matter how hard the President found all the braiding and beading to be, the bracelets certainly turned out well, and are certainly the envy of practically everyone on Twitter right about now. At this point, who doesn't want to be part of the Obama-Biden bromance? This photo of the bracelets was clearly the gift Obama had been waiting for.

President Obama and Vice President Biden seem to be more and more appreciative of each other every day, proving that their friendship is more than just an invention of the Twittersphere. In fact, in a June interview on CBS This Morning, the vice president explained to host Charlie Rose just how close he and the president are, saying, "He was there for my son. He was the only one, when my son was dying, that I was able to be completely candid with. He was genuinely moved... So it's a genuine friend — I respect him."

However, the two certainly joke about their friendship, too. At the White House Correspondents' Dinner in April 2016, the president joked, "I tease Joe sometimes, but he has been at my side for seven years, I love that man. He’s not just a great vice president, he is a great friend. We’ve gotten so close that in some places in Indiana, they won’t serve us pizza anymore." Nice one, Mr. President.

The president had no shortage of loving birthday messages on Twitter today — First Lady Michelle Obama tweeted at her husband: "55 years young and that smile still gets me every single day. Happy birthday, Barack. I love you." However, only Vice President Biden has the president's friendship bracelet — a talisman of what has to be the best bromance, ever. Happy Birthday, Mr. President!

More like this
What Is Barack Obama’s Net Worth? He Makes *Way* More Now As An Ex-President
By Hugh McIntyre
The Case For A Hard Launch Summer
By Morgan Sullivan
10 Times Diana & Meghan Spoke Similarly On The Royal Family
By Sophie McEvoy
How The City Healed Five Years On From The Manchester Arena Attack
By Ella Glover
Get Even More From Bustle — Sign Up For The Newsletter