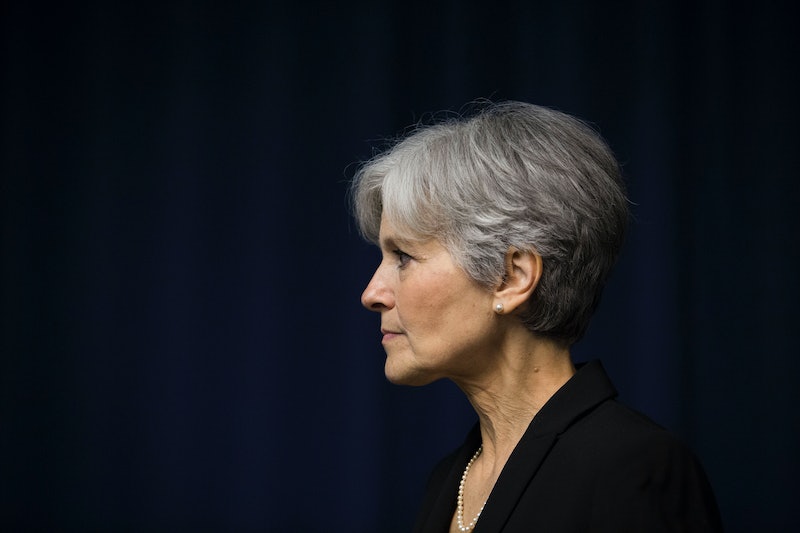 Whether it's Hillary Clinton's history of anti-gay marriage remarks, Donald Trump's history of bigotry against basically everyone, or Bernie Sanders' record on Israel-Palestine relations, the statements made by those we hope to elect cannot be understated when we go to the polls. Yet strangely, since Sanders lost the primary to Clinton, I'd argue that some Bernie-or-Busters seem willing to let the problematic statements made by third-party candidates go by the wayside in order to "stick it" to a candidate they believe rigged the election. If asked why Jill Stein's anti-vaccination pandering matters, one need only to look at the people she's pandering to to see how dangerous this kind of politicking truly is.

To be clear, it's not that Stein is anti-vaccination herself — but she arguably hasn't sought to distance herself from the anti-vaccination movement. A doctor herself, Stein has openly insinuated that she can't say for sure whether vaccines do or do not cause autism, as Salon's Amanda Marcotte writes, suggesting that there's more work to be done by the scientific community on the topic. (Spoiler: There isn't.) Although her campaign's official platform is that Stein encourages childhood vaccinations, her less-than-certain remarks on the topic could endear her to a new voter base.

If you've never been forced to engage with anti-vaxxers in an argument about vaccinations, consider yourself lucky. To me, they are often a stunning example of privileged ignorance: They're often white and middle or upper-middle class (meaning they are more likely to be able to swiftly treat their children if they contract easily-preventable diseases), and fail to see how not vaccinating their children could put other kids at risk. The numbers back this up: According to the Center for Disease Control, measles cases rose 340 percent between 2013 and 2014, and most of those at the heart of measles outbreaks were unvaccinated. Given that measles were all-but-eliminated in 2000, this trend is startling, to say the least.

The dangers of not vaccinating children can't be understated, and Stein's continued pandering to those pseudo-scientific anti-vaxxers can and should be viewed as a reason to oppose her and her highly unlikely presidential bid. But the most insidious aspect of anti-vaccination sentiments and those who seek to appease anti-vax voters lies at the heart of the myth that vaccinations cause autism: the incredibly damaging belief that autism is a fate worse than communicable disease and death.

Writer Sarah Kurchak, who is on the autism spectrum, put it well in a 2015 editorial about why anti-vaxxers irk her, writing:

Someone who refuses to vaccinate their children because they’re afraid of autism has made the decision that people like me are the worst possible thing that can happen to their family, and they’re putting everyone at risk because of it. I’ve been told by some anti-vaxxers that they don’t mean my brand of autism; they mean non-verbal autism, or as they are so fond of calling it, “profound autism.”

This extract serves as an excellent summary of why anti-vaxxers (and people like Stein, who may or may not be an anti-vaxxer herself, but who aims to benefit from them and therefore speaks to their sensibilities) present one of the most shocking and egregious mindsets in modern American thought: They truly consider autism to be a "disease" of such gravity and horror that they would rather their children (and other people) contract the measles, mumps, smallpox, meningococcal disease, rubella, HPV, and other serious (and preventable) illnesses than have a potentially autistic child. What message does that send to the countless people who have autism spectrum disorders?

Jenny McCarthy, a has-been model, former host of The View, and the anti-vax poster girl, once said that when her son (who is autistic) was vaccinated, it was like "the soul’s gone from his eyes." She literally dehumanized her own child by saying that somehow, his autism diagnosis made him soulless. While this sort of thought and rhetoric isn't necessarily shared by the anti-vax community at large, it's certainly not publicly called out by those who adhere to these beliefs, making them as complicit as any other group who fails to reign in the most hateful of their ilk.

In an interview with Elle earlier this year, Stein called autism an "epidemic" and a "public health calamity," but has remained mum on the actual outbreaks of measles that are the result of anti-vax sentiment. While she is not nearly as popular or (gasp) electable as Trump, she is as culpable for her foolhardy, power-grabbing pandering to anti-vaxxers as he is for the rise in bigoted bullying in schools. Both prove that a politician needn't actually believe the ignorance they spew to do real damage from their platforms.

More like this
How The City Healed Five Years On From The Manchester Arena Attack
By Ella Glover
Michigan’s Governor Is “Going To Fight Like Hell” To Protect Abortion Access
By Andrea Zelinski
Plan C Vs. Plan B: What's The Difference?
By Lexi Inks
Harry Styles Called For "Backlash" In Powerful Statement On Abortion Rights
By El Hunt
Get Even More From Bustle — Sign Up For The Newsletter