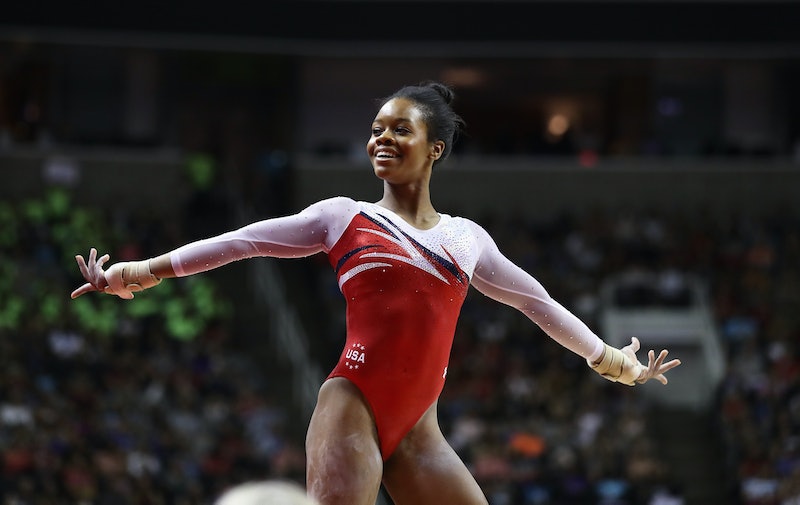 The 2016 Summer Olympics are finally happening in Rio de Janeiro, kicking off with the opening ceremony on Friday night. The part I'm looking forward to the most, though, is the Parade of Nations, where viewers have the opportunity to see if their favorite athletes are in attendance and what look their country is sporting. There are many big names set to represent the United States at the games in Rio and you might be wondering, is Gabby Douglas at the Olympics Opening Ceremony?

Well, turns out, Douglas does not appear to be present at Maracanã Stadium for the big event with the athletes from the United States, just like the rest of the U.S. women's gymnastics team. This makes sense, of course: Along with her team, the gold medalist is set to defend her 2012 victories when women's gymnastics action begins on Sunday, Aug. 7 with the women's qualifying events in balance beam, vault, uneven bars, and floor.

At age 16, Douglas won gold medals as the best all-around individual gymnast and with Team USA at the London Olympics in 2012. She became the first African-American gymnast to win gold and the first female to take home first place in both the individual and team gymnastics competition, according to NBC Olympics. Four years later, Douglas returns to the games to defend her gold — but not without some challenges. In July, Douglas' mom Natalie Hawkins revealed to reporters that the 20-year-old star athlete had fractured her right knee last year, but now her knee is fully healed, according to the San Jose Mercury News.

According to the Associated Press, Douglas said she is looking forward to bouncing back from a sub-par performance at the Olympic trials, which caused some to question her appointment to Team USA, but the champ said she is excited to prove people wrong. “I mean everyone makes mistakes and after trials it was hard because there was a lot of negativity, but whatever,” Douglas told the AP. “I feel like shutting it all the way (down) and I have to prove myself.”

And she'll get that chance in Rio, starting on Sunday.

More like this
What Is Jeanie Buss' Net Worth? The Lakers President Is Uber Rich
By Hugh McIntyre
Jake Daniels Just Became The UK’s First Active Football Player To Come Out As Gay Since 1990
By Sam Ramsden
Everything To Know About A Potential 'Love On The Spectrum U.S.' Season 2
By Gretchen Smail
Everything To Know About A Million Little Things' Reported Final Season
By Brad Witter
Get Even More From Bustle — Sign Up For The Newsletter