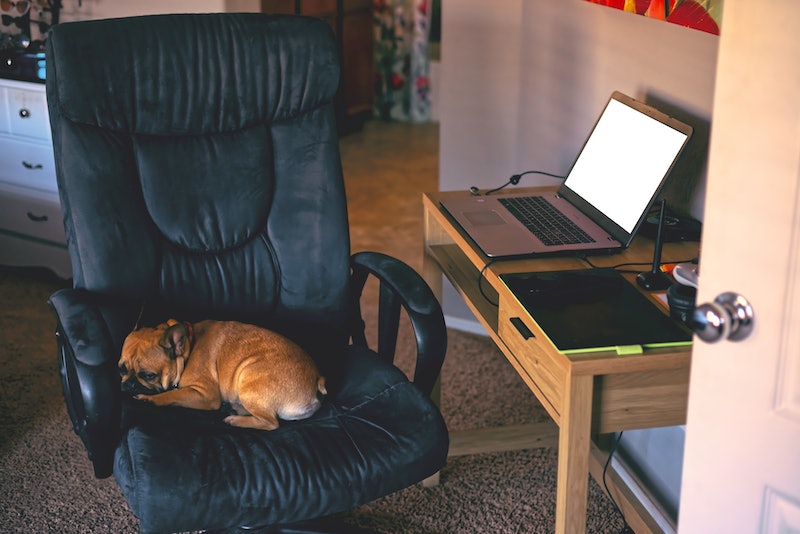 If you've ever put off a project in order to go on a picnic or watch all seven seasons of an '80s TV show, only to freak out the night before it's due, you've probably wondered: why do we procrastinate? Just saying "it feels good" isn't really a satisfying answer, because if you're good at procrastinating, you'll know that it often doesn't feel good at all. It's not a sensible activity and definitely doesn't contribute to human happiness overall, so why do we do it, and why do some people seem to be immune to its horrid charms? Are they just — gulp — better than we are?

The answer, according to science, is no. We often understand procrastination in moral terms — "strength of character" or "force of will," in other words, is meant to prevent us from putting aside our taxes and spending 45 minutes watching YouTube videos about cupcakes; work ethic is discussed as a sign of dedication or awesome habit. But we're increasingly discovering that procrastination can develop from a range of genetic traits, and is drawn from our ability to control our impulses, rather than our wish to do well or "buckle down." People who procrastinate are usually aware that they're doing themselves a disservice; it's just that, at the time of choosing, they decide it's a better plan to avoid doing Sensible Things in favor of Frivolous Things, and we're still trying to understand why this happens.

Here are five bits of fascinating science about the neurology and psychology of procrastination, from possible frontal lobe malfunction to future-self conceptions.

1. It's About Impulsivity, Not Ambition

One of our largest misconceptions about procrastination surrounds how it actually works. We tend to think about procrastinators as lazy or unmotivated, but that doesn't capture the real experience of procrastination: of guilt, shame and increasing anxiety as the task deadline nears, and of the perpetual allure of the television even though, rationally, we know we need to do our essay.

Psychology Today explains that procrastination is, in its own way, about our values: "The decision to work on something is driven by how much we value accomplishing the project in that moment — what psychologists call its subjective value. And procrastination, in psychological terms, is what happens when the value of doing something else outweighs the value of working now." Or at least when we believe it outweighs it; we're not strictly rational beings, and our decisions about the values of comparative activities depend on a lot of things. We're increasingly discovering that one of their biggest influences on whether or not we procrastinate isn't our ambition; it's our impulsivity.

The Canadian psychology Piers Steel, who specializes in the study of procrastination, explained to The New Yorker in 2014 that his experiments with procrastinators always found something interesting — the worse they procrastinated, the more impulsive they were overall. And that implied something worth noting: procrastinators aren't innately laid-back or immune to worry; they're actually just bad at resisting impulses, including the impulse to do something pleasurable (like look at cat pictures) instead of doing their work. In other words, it's a self-control issue, not a character problem.

2. It's A Bad Idea For Both Performance And Wellbeing

Another myth about procrastination that's been conclusively busted by science? That procrastinators have any fun while they're putting off until tomorrow what they could be doing today. While their impulses might drive them towards what seems like a more valuable or enjoyable experience in the moment, it doesn't actually lead to better experiences or better performance.

The Association for Psychological Science reports that in 1997, a famous study was done about the issue, focusing on the impact of procrastination on the stress levels and academic performance of college students. It was the first of its kind, and it found something very interesting indeed. As you may have figured, procrastination among the students being studied was linked to lower performance levels overall; their quality of work suffered, as did their grade point average.

But, intriguingly, the perception of procrastinators as don't-care types was busted; while the students who procrastinated were initially less stressed than others, as their deadlines mounted they rapidly became much more stressed, and more inclined to develop health problems. Procrastination, it seems, makes us vulnerable both in our performance and in our stress levels.

3. It Seems To Be Linked To Genetics

Why are you a procrastinator? Did you pick it up from somewhere? Did it seem to emerge unbidden in high school or college as the phenomenon of deadlines became more entrenched? There's an increasing amount of science that indicates that it doesn't actually come purely from thin air or from peer pressure; there may actually be a genetic component in your procrastinatory ways.

The Huffington Post, in a fascinating round-up of procrastination science back in 2014, picked up on one of the most interesting lines of research about why we put things off: it might actually be inherited. Based on the idea of Steel and others that procrastination is related in some way to impulsivity, a collection of researchers at the University of Colorado, Boulder, created experiments to test whether "the voluntary but irrational delay of an intended course of action," as they called procrastination, might have a biological basis. They looked at 347 sets of same-sex twins to see if there was a genetic relationship between procrastination and a tendency towards impulsivity, and found that "procrastination and impulsivity are linked primarily through genetic influences on the ability to use high-priority goals to effectively regulate actions." In other words, they've got a genetic link. If your parents were procrastinators, it's likely you might be one, too.

One of the most interesting studies of procrastination among the young and well-educated (specifically, college students under 30) was published in 2011, and it specifically targeted what's called "executive functioning" in the brain. Explaining what "executive functioning" actually is can be quite difficult; the British Medical Bulletin points out that it's largely conceived of as an "umbrella for various complex cognitive processes," including planning, working memory, solving complex problems or performing sequences of complex actions. We do know that many of these processes appear to function in the frontal cortex of the brain, and the 2011 study wanted to see if executive function was tied to procrastination.

There are ways to assess whether somebody has high-level executive function; in fact, there are nine of them, to be precise. They're behavioral regulation, self-consciousness about behavior, planning ability, the ability to shift from one task to another, task-starting, task-monitoring, the ability to control emotional responses, the ability to hold information for use in the memory, and organization. The 2011 researchers, from the City University of New York, asked 212 college students to self-report how skilled they felt they were at these nine abilities, and also how much they procrastinated. The results were pretty amazing: procrastinators scored low on all nine of the abilities. One of the scientists, Laura Rabin, suggested to the Association of Psychological Science that procrastination might be “expression of subtle executive dysfunction;” in other words, it might mean that the frontal lobe in procrastinators is slightly malfunctioning, possibly because of their genetics.

A fascinating experiment conducted by UCLA professor Hal Hershfield revealed one of the crucial problems behind procrastinatory decisions: they're often based on a vision of the future that isn't entirely clear. He performed MRI scans on people as they described both their current selves and their 10-years-in-the-future selves, and found that the brain often lit up in entirely different ways; many of us are disconnected from our future selves, not fully feeling as if they're actually "us." And Hershfield pointed out, in an interview with the Harvard Business Review, that this disconnect can influence procrastinatory behavior; if we don't really believe in our future self, we can saddle him or her with a bunch of stress or worry without much difficulty. If, in contrast, we look at ourselves in the future (in a week, or in a year) with a sense of empathy or connectedness, we seem to be less likely to cause that future self suffering or stress by delaying our work.

Hershfield has tried to remedy this by giving people mock-ups of their faces with wrinkles and realistic aging, and then asking them to make future-based decisions; people who looked at their future selves and "connected" were more likely to save their money or take other actions that benefited 10-years-older them. It's not just all disconnection, though. We might also be connected to our future selves when we procrastinate, Dr Timothy Pychyl suggests for Psychology Today, in that we think affectionately that our future selves might be "better" at whatever task we're putting off. Either way, spare a sympathetic thought for the future you who's going to have to clean up this mess.