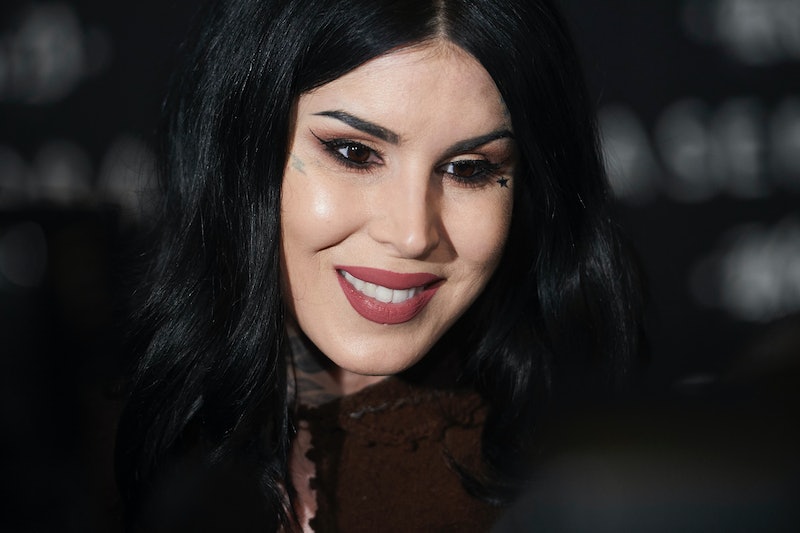 She's putting her animal activism where her (and your) mouth is — literally! Kat Von D has been reformulating her Kat Von D Beauty brand to be entirely vegan. The celeb tattoo artist also works her butt off to raise awareness for animal rights and protections issues. She wears highly fashionable, vegan apparel, which she touts on her personal Instagram. KVD is taking her passion for animals a step further, though. Kat Von D has created Project Chimps, a matte, orange x red Everlasting Liquid Lipstick. It's a limited edition, charity shade. Proceeds from the lippie will be donated to Project Chimps, a sanctuary that caters to and rehabs chimps that were rescued from testing labs! When can you grab a tube of Kat Von D's Project Chimps Everlasting Liquid Lipstick?

The shade, which Von D claimed is her favorite for obvious reasons, is available to buy on August 23. So mark your calendars and make iPhone calendar reminders. Not only can you paint your pucker with a gorgeous, reddish orange shade but it's also a passive way to help others. You can do your part to help support a cause close to Von D's heart and look smashing in the process.

As Kat Von D-evotees know, her Everlasting Liquid Lipsticks are primo quality and are some of the best mattes on the market.

What a blockbuster, wearable red! The texture and the orange-y tone are amazing. As Von D stated in the caption, she has been volunteering with Project Chimps and she is doing her part to spread the word.

I love that the shade is a fiery one — it matches Kat's passion for animal rights. She has also been working on expanding the Everlasting range with more shades. This one is extra special, though.

Kat is all about red lips and tips.

Kat Von D doesn't simply pay lip service to animal causes. She dives right in and does cool stuff, whether it's volunteering at the sanctuary or creating a lipstick that will benefit it. Her lip service is a lipstick paired with action.

More like this
The Friends Of Glossier Summer Sale Is Back
By Tomi Otekunrin
What Are "Gym Lips" & Why Is BeautyTok So Obsessed With Them?
By Olivia Rose Ferreiro
19 Memorial Day Beauty Sales To Shop In 2022
By Audrey Noble
Charlotte Tilbury Just Launched A Royal Collection To Mark The Queen’s Platinum Jubilee
By Tomi Otekunrin
Get Even More From Bustle — Sign Up For The Newsletter