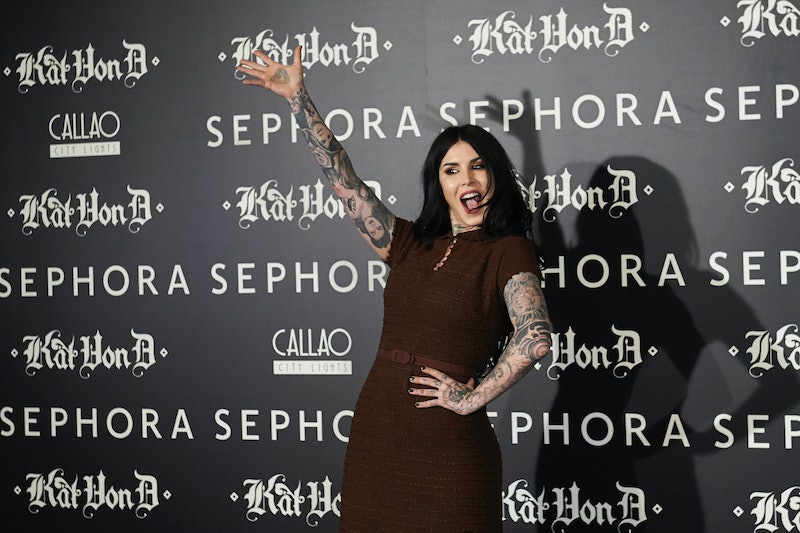 The fact that matte lip queen Kylie Jenner introduced a new line of majorly wet look lip glosses last week isn't a death knell for suede-like, precise, and shine-free puckers. Sure, Jenner's new product signals a trend shift, but matte liquid lipsticks aren't going bye bye. Need proof? Well, Kat Von D is busily creating new shades of her Everlasting Liquid Lipsticks, which are pigment-rich mega mattes similar to Kylie Lip Kits and are sold at Sephora and on the Kat Von D Beauty site. So if you were even the least bit worried that matte lips were falling out of favor after you stocked up on KLKs or Everlastings or even ColourPop's budget but beautiful Ultra Mattes, you can cease all that fretting! Kat Von D shared both a new shade and some further details about the expansion of the Everlasting range, many shades of which are often sold out. Warning: Fabulousness ahead.

Von D posted a shot of herself wearing a stunning chocolate cherry shade she is calling "Plath" in honor of the late confessional poet Sylvia Plath. The celeb tattoo artist and makeup maven posed in broad daylight, so you get the full effect of this shade IRL.

So pretty, right? Notice that she is also holding the tube, which would suggest that the shade is in production and is, in fact, coming soon, as noted in the heavily hashtagged caption.

Something else to cling to? The fact that Von D said that she has been testing "so many new shades to add to my Everlasting Liquid Lipstick collection." That could mean that Plath won't be the sole addition to this ever-popular liquid lippie collection.

I cannot wait to see what else Kat Von D Beauty comes up with in terms of expanding the Everlastings. If she is expanding the shade range, it's evidence that matte lips are staying put, as a trend and a formula.

In fact, Kat Von D Beauty is constantly evolving in the best possible ways. Last week, Von D teased that she is updating her Lock-It Foundation. While she won't be tinkering with the beloved, full coverage formula, she is making it more inclusive, adding even more light and dark shades while giving the packaging a makeover. It'll be the same but better and it's coming this summer.

Oh, and here's some more Kat Von D lip awesomeness. She really can rock those reds and she provides so many great lipstick shades for her Kat Von D-evotees.