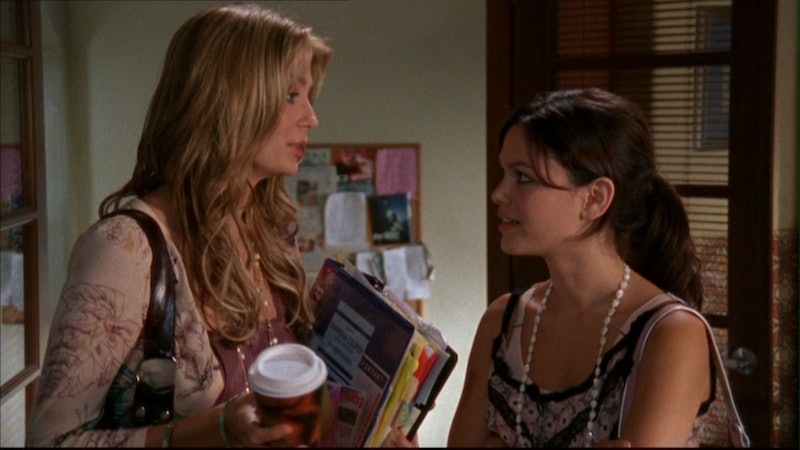 Yeah, I know we’re still wrapped up in the cuteness of Seth and Summer, and the drama of Marissa and Ryan, but, for me, there’s only one O.C. pairing that warrants #relationshipgoals, and that’s Coop and Sum. Marissa Cooper and Summer Robert’s friendship is one of the greatest beacons of sisterhood that exists in CW history, and I feel like it’s time to reflect on everything they taught us about being the best BFFs, because there's never a bad time to do that, really.

Through their ups and downs, the overdoses and the break-ups, you can’t deny that they were always there for each other. Yes, Marissa and Summer had their moments of Valley Girl-esque annoyance. But it didn’t matter: their decade-and-a-half long friendship was unbreakable. Maybe they weren’t always good, but they were certainly always good friends. Or at least Summer was a good friend to Marissa. Marissa had her moments, but she also had... a whole lot going on during the run of that show, if we’re being honest with ourselves here.

Regardless, there are definite moments of friendspiration thanks to the two. So here are just a few lessons audiences learned by watching Summer and Marissa’s friendship.

1. Cute Nicknames Re-Enforce Your Love For One Another

The fact that Marissa and Summer called each other Coop and Sum was so presh, and it pushed a generation of gal pals to adopt shortened monikers for their friends.

2. The Friends Who Cruise Together, Booze Together

I always loved when the duo met up in the bathroom and played a rousing game of "Look what I stole!" Hint: Marissa and her ginormous bottle of vodka wins. Still, it's always good to have a friend who's willing to hijack all the free wine at the networking parties and pseudo-fancy PR events you get wrangled into... and even better if you have someone who will toss some cheese cubes into their Chanel bag.

3. When Something Goes Horribly Wrong, It’s Important You Be There For Your Friend On The Immediate

The O.C. first showed off its melodramatic chops with the whole Tijuana episode, but I think special attention needs to be paid to how Summer went to Marissa after the Luke-Holly fiasco. After she tried to give Holly the beatdown, she immediately tracked Marissa down to the hotel room to comfort her. Yes, this continued to spiral out of control, but Summer's efforts can't be denied.

4. You Have To Bail Your Bestie Out Of Trouble, Even When It Means Teaming Up With Undesirables

Long before they become the core four, Summer had to suit up in a candy striper costume to get her main girl out of the hospital. Hopefully, your BFF's problems require a little less effort than that, like making a phone call when she's on a lackluster Tinder date.

5. Be A Shoulder To Cry On, And A Hand To Push Someone Towards Better Things

Of course you can mourn the ex-boyfriends that ran out of town, whether the reason he bailed was because of a pregnant former lover or a loneliness-inspired sailing trip. Ah, ghosting in the early 2000s was so creative. However, it's important that your friend points you in the direction of something rebound-a-licious... ideally the hot yard guy.

6. Sometimes When Your Friend Is Hurting Too Much, It's Enough To Just Stand By Their Side

Or lay by their side, as Marissa did when Summer was all tear-stained and fetal position-ing.

7. A Good Way To Maintain Loyalty Is To Get On The Offensive Toward Your BFF's Rivals And Enemies

Maybe it's just the rage blackouts that force Summer to attack Holly on Marissa's behalf, one can never be sure. What is clear is that Summer routinely got her claws out whenever someone makes even a snide remark about her girl, let alone anything else.

8. When Things Are Really Looking Bad, A Friend Should Always Pick-Up On The Tell-Tale Signs

And find a gentle way to pursue the situation, like Summer did when she noticed Marissa acting strange after Trey attempted to rape her. "The weird bruise on your neck and the bad excuse from you, weird tension with Trey and then you don't even bother to make up an excuse," Summer said. "Marissa, please don't lie to me, I'm your best friend and I know something happened. Please just tell me what's going on." This is the right course of action when you notice something's wrong.

Who can forget the stress Volchok put on the girls' friendship? With Summer annoyed by Marissa's downward spiral, an outward war of words burst out in the school parking lot. "Fine, well why don't you take your little emo boyfriend and drive off in your beamer and go home to daddy's mansion?" Marissa sniped. "Oh yeah, why don't you go with Volchok to one of his heavy metal vomit parties and, like, listen to heavy metal and vomit," Summer sniped back. Maybe not her best snarky moment.

10. Your Lady-Soulmate Honors The Moments When You Shine The Brightest

On the other side of things, a good friend showcases how radiant their bestie can be... which is why this picture of Marissa at the fashion show fundraiser lived on Summer's beside table. Just in case you wanted to ship this BROTP (SISTP? Doesn't work, my bad) any harder.

11. A True Friend Believes In You, Even When You Can’t Believe In Yourself

Marissa's Season 3 journey had her so lost and doubting she was really college material. But Summer knew her friend could do it from the get-go, and the proof is in the pink Berkeley sweatshirt she gifted to Marissa upon her admission... that Summer bought "a few months ago." All together now: "Aww!"

"You're my best friend forever, OK?" Those were essentially Summer's parting words to Marissa before she embarked on a car ride that ended her life (that, and a comment about hooking up with a Greek shipping heir). It's my sincerest hope that your friendships, though it will inevitable has it's ups and downs, will not suffer any tragedy of that nature. But knowing the brevity of life, never forget to cherish the people you love most, especially when it looks like it could be a long goo bye.

This friendship may have ended tragically, but it will be an inspiration forever. Just like Summer and Marissa inspired each other to be their best selves.