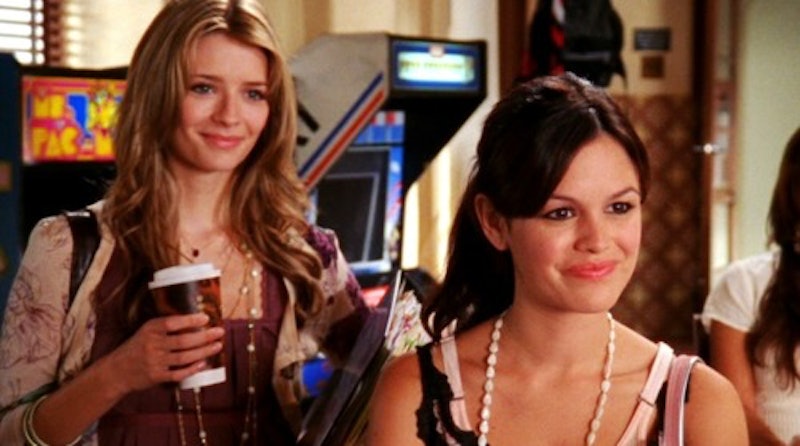 Although fans of The O.C. fawn over the brotherly relationship of Seth and Ryan, or ship Seth and Summer 4ever (please, as if they would still be together) I think the most aspirational pairing has to be Summer Roberts and Marissa Cooper. The O.C.'s Summer and Marissa had the kind of friendship that seemed too good to be true. Mischa Barton and Rachel Bilson, who played the dynamic duo on the primetime series, quickly became huge stars because of their roles. But unlike The O.C.'s Gossip Girl counterparts, who were not above back-stabbing and boyfriend-stealing, Coop and Sum always had each other's backs.

Through the good times of chilling poolside, to the bad times of Marissa's self-destructive streak acting as "Newport's answer to Courtney Love," these two were always side by side. Summer put up with a lot of Marissa's craziness and everyday damseling and Marissa always treated Summer with kindness and patience, recognizing Summer as more than the superficial facade we saw early in Season 1. So today, let's celebrate their bond with some of their most memorable moments being the best best friends on television.

1. When they both co-opt booze at a high society fashion show fundraiser

This goes all the way back to the premiere, when Summer gleefully corners Marissa in the bathroom holding two glasses of champagne. "Look what I stole!" she says. "Look what I stole," replies Marissa, holding up a whole bottle of vodka. Though this whole scenario pretty much predicts Marissa's series-long problem with alcohol, it's an otherwise cute moment that captures that giddy teenage moment when you bond with a friend over something rebellious.

2. When Summer comforts Marissa about the whole Trey incident

To clarify, Marissa is having night terrors about Ryan's awful brother who attempted to rape her, and kill Ryan. It is the worst, in short. She wakes up intensely upset, and calls up Ryan, who's basically like, "Go to sleep." But Summer is right there next to Marissa, calmly talking her through it. "I'm here," she says. She is always there.

3. Whenever they get each other through heartbreak

And there is a lot of that, considering Ryan's (sometimes warranted) jealousy issues, and Seth Cohen's... Seth Cohen-ness.

4. Whenever they have honest and healthy real talk

I think it's good that their relationship wasn't all hugs and snuggles, they are truly open with one another. When Marissa informs Summer that she broke up with Volchok and has to pick up her stuff, Summer informs her that it's a bad idea. "Saying your last goodbye with his dirty mattress in plain sight? That is breakup sex waiting to happen," she remarks. Tell it like it is, girl.

One of the sweetest moments is when Marissa manages to get into Berkeley, and Summer already has a pretty pink Berkeley sweatshirt picked out for her. "I bought this a few months ago, looks like somebody believed in you," she says. All together now: "Awwwwwww."

7. When their friendship never dies

The trauma is still there when Summer starts her tenure at Brown. Even though seeing Marissa in the bedroom across the hall is a hallucination, it proves that she never really left Summer.

More like this
“The Door Is Always Open” For Another 'Breaking Bad' Spin-Off, Says AMC Boss
By El Hunt
At 14, Kate Berlant Had A Wheelie Backpack & One Line In 'Lizzie McGuire'
By Samantha Rollins
'The Summer I Turned Pretty' Using “Cruel Summer” Has Twitter Begging Taylor Swift To Release A Music Video
By Radhika Menon
Martin Hancock’s Wife Played A Key Part In His Return To 'Coronation Street'
By Catharina Cheung
Get Even More From Bustle — Sign Up For The Newsletter