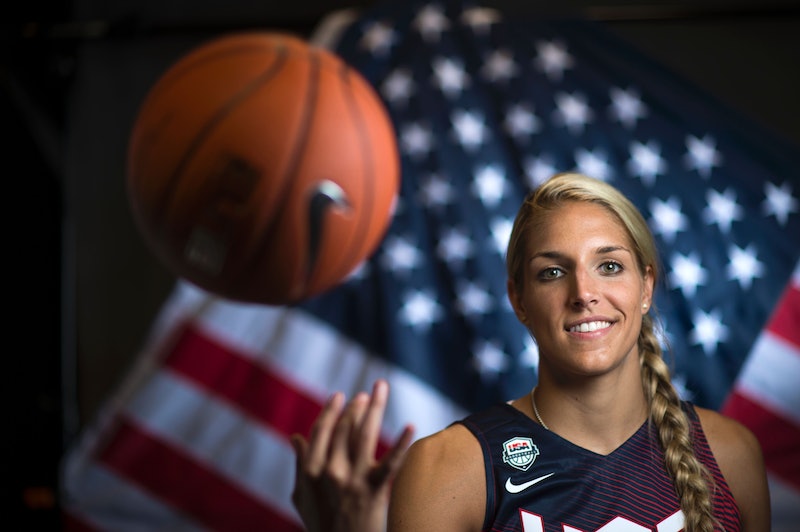 In a Vogue magazine profile published just before the Rio Opening Ceremonies, WNBA star and competing Olympian Elena Delle Donne came out so quietly that it almost seems an afterthought. The Chicago Sky player never explicitly talks about her sexuality; instead, the article mentions the existence of her fiancée, Amanda Clifton, amid discussion of Delle Donne's personal life. More time is spent describing the close relationship between Delle Donne and her sister than the athlete's sexuality — a prioritization that would have been unfathomable 15 years ago, when an openly gay athlete had yet to compete in the Olympics.

At a press event in Rio ahead of the 2016 Summer Games, Delle Donne explained that she had never hidden her sexuality, but she kept quiet about it to reporters out of respect for her partner's privacy. "I’ve been with [Clifton] for a very long time now, and people who are close to me know that, and that’s that. ... I decided I’m not at all going to hide anything," she said, according to the Huffington Post.

As ESPN points out, with Wednesday's Vogue profile, Delle Donne becomes at least the third member of the U.S. Olympic women's basketball team to openly announce her same-sex relationship. (The other two teammates are Britney Griner, whose marriage was actually annulled last year, and Seimone Augustus, who is married to actress LaTaya Varner.) Just as importantly, she joins dozens of other openly out Olympic athletes — 44, to be exact — from around the world who are competing.

Traditionally, the sports world isn't known for its welcoming attitude toward the LGBTQ community; in 1981, tennis player Billie Jean King was dropped by all but one of her sponsors in the 24 hours after she was outed by her former partner. That same year, tennis pro Martina Navratilova became the first famous athlete to intentionally come out, but she also lost endorsements following it.

The situation improved over the next 30 years, but it was slow going. Although it became more common for athletes to come out as LGBTQ after they retired, it wasn't until 2004 that Navratilova competed in the Olympics, over 20 years after coming out publicly. The 2008 Bejing Olympics marked the first time an openly gay man won a gold medal: Matthew Mitcham, who performed the highest-scoring single dive in history. However, he was one of only 10 athletes who were out during the Bejing Olympics; that number plummeted to just seven at the Sochi Winter Olympics in 2010.

The 2012 London games, though, marked a record rise in the number of openly LGBTQ Olympians, and this year, their presence has nearly doubled.

Stigma is certainly still present — for instance, Outsports notes that there are no openly gay or bisexual men on Team USA — but if Delle Donne's understated announcement is anything to go by, being LGBTQ is becoming something athletes are no longer forced to hide. If that's not something to feel patriotic about, I don't know what is.

More like this
Jake Daniels Just Became The UK’s First Active Football Player To Come Out As Gay Since 1990
By Sam Ramsden
How To See The Lunar Eclipse On May 15-16, 2022
By Kaitlyn Wylde
How To Fight For Reproductive Rights, Based On How Much Time You Have
By Courtney Young
10 Times Boris Johnson Got It Wrong On Trans Rights
By El Hunt and Sam Ramsden
Get Even More From Bustle — Sign Up For The Newsletter