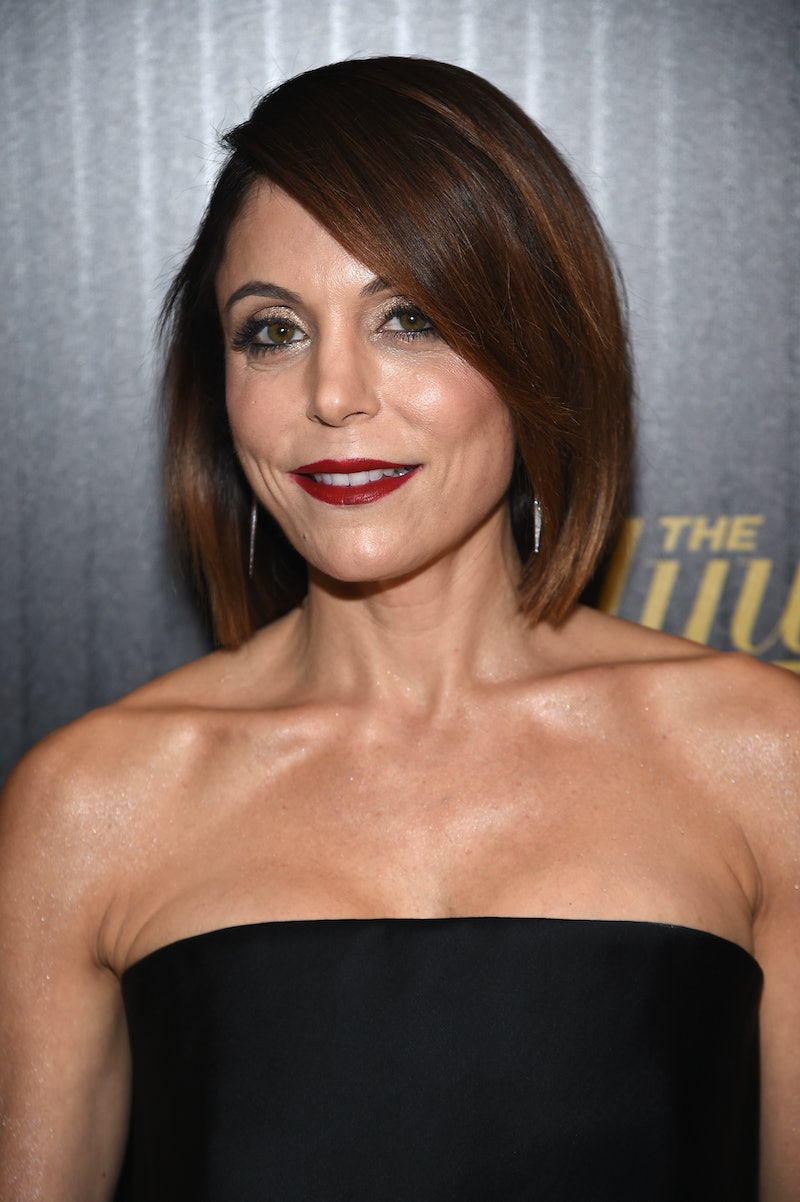 Luann de Lesseps might not be the only Real Housewives of New York City star walking down the aisle. There's a chance that Bethenny Frankel is engaged — say what now? In a Wednesday, Aug. 3 post shared by the Skinnygirl mogul on the new Instagram Stories feature, Frankel can bee seen wearing a huge diamond on her ring finger while sitting on what appears to be the lap of her boyfriend, Dennis Shields. She also posted another photo on Snapchat, where the diamond is visible on her ring finger. No context was given surrounding the ring, so it's unclear what message the author is sending. So, of course I have to ask, is Bethenny Frankel engaged — for real? There is evidence for and against it, so let's take a look at it all.

Bustle has reached out to a rep for RHONY for comment from Frankel, but we have not yet received a response.

Regarding the ring, an alleged friend of the Housewife spoke to People on the matter and said that Frankel is not engaged. "Bethenny is happy and enjoying her summer," the source claimed. Another source also told Page Six, that there is "nothing new to report … She is enjoying her summer." I don't know about you, but "enjoying her summer" doesn't clarify anything. It's not a definitive yes or no, so she could still be planning a wedding.

Fans of Frankel probably aren't convinced by the diamond ring, especially after watching the 45-year-old go through a horrible divorce from Jason Hoppy, which was finalized in July. Their split was not an amicable one, nor did it go without drama. Heck, she has even come outright and said that she won't get married again. During a March 2015 Watch What Happens Live appearance, Frankel said, "I will never get legally married again. It doesn't mean that I would not commit to someone. I'm not jaded. I'm not bitter about love. I think there are amazing guys out there in the world, it's none of that."

However, Frankel contradicted that statement in Season 8 of RHONY, when she discussed her new man with Carole Radziwill and admitted that she'd consider marrying him. (Frankel did not refer to him by name, but she most likely meant Shields, since they started dating around the 2015 holidays and this episode was filmed then.) Plus, he has all of the qualities she's been looking for, which is a huge bonus.

As for the ring, well, Brides pointed out that Frankel has previously been spotted wearing a similar diamond.

Basically, the mystery behind her supposed engagement isn't getting solved anytime soon. It doesn't seem likely that Frankel would announce the news this way, but then again she isn't one to follow along with the "right" ways to do things. So, maybe just maybe, the RHONY star decided to just put it out there without any explanation and on her own terms. Or, you know, she could very well be pulling a prank. I mean, she does have great sense of humor.

Whatever the case, one thing remains certain and that is the diamond is ginormous.