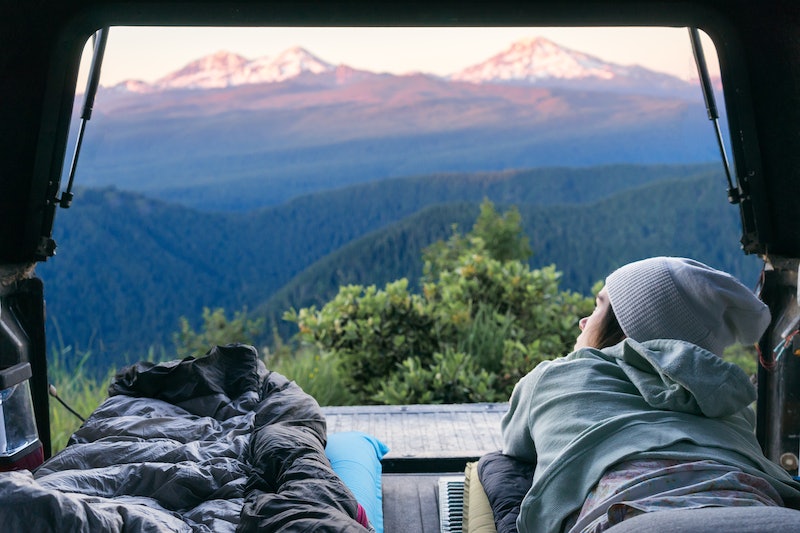 When we get self-reflective — during those moments when we attempt to tease out the deepest depths of who we are as people — we often ask ourselves what our "real" selves are. You know, the most genuine, truest version of yourself that you might feel you have to tamp down in certain circumstances, or which you might just be too reserved to share with everyone you know? Yeah. That "real" self. Depending on how introverted or extroverted you are, you might feel like your "real" self is pretty readily available to the outside world, while other people often feel like they keep it a little more hidden. It all goes back to the same question, though: Who is the real me? What makes the "real" me... well, real?

Some psychologists argue that instead of having one "real" self, we actually have three selves. The argument is essentially that, as humans, we're naturally layered and multi-dimensional, with multiple selves to suit different situations. I actually love this concept because it takes some of the pressure off if you're someone who struggles with the notion of always "living your authentic life" or "being true to yourself."

In particular, Brian Little, a personality psychologist at Cambridge University, argues that we all can understand ourselves and our personalities on a better, deeper layer if we explore all of our personality layers, and recognize them as different layers of our selves. Little breaks down his theory into three broad strokes (recently reported on by Science of Us), each pertaining to a different "layer" of what he suggests are most people's personalities.

So if the magic number is three, what are all those different selves, exactly? Let's take a closer look at each one:

According to Little's theory, the first "layer" of yourself is "biogenic." In layperson's terms, this means that your first "self" basically comes down to biology and what your genes tell you to do. However, as Science of Us points out, Little warns us to be careful about what we ascribe to our biogenic selves; genes don't necessarily entirely explain or excuse someone's behavior or feelings. For example, simply saying, "I have anger problems because it's in my genes," does not make it OK to lash out at someone else.

Little describes the second layer of "self" as "sociogenic" — that is, how our surroundings, such as our family, neighborhood, or culture, influence us. You remember the whole nature versus nurture argument? The sociogenic self is basically the "nurture" part of the debate. Of course, a complexity here is that, for example, if you share the same genes as your family, you may have certain dispositions both genetically and through socialization. This of course isn't the case with say, people in your neighborhood or the kids you went to elementary school with, who were also present during your formative years; they have both different biogenic and sociogenic selves than you do, although it's possible that your sociogenic selves might share certain environments.

In Little's final personality layer, we examine the "idiogenic" self. This version of yourself is basically the one that you cultivate based on your interests, likes, dislikes, passions, and so on and forth. In this layer, you prioritize things based on how important they are to you personally. For example, you may choose to stay up later than the rest of your family because you're serious about a project, or you may start excusing yourself from community events because you'd rather be at a sports practice. Basically, this is the section of your personality where you begin to form behaviors based around your own preferences and needs.

Now, this might go without saying, but not all of the layers of our selves work together. In fact, we can feel a whole lot of conflict between our layers, especially depending on our situations and the way we typically identify ourselves. As Drake Baer over at Science of Us points out, "If you’re a social butterfly with finals coming up, you might act the introvert because you want to raise the GPA that you neglected while partying all semester," suggesting that some layers of your personality can be brought out depending on circumstances and your environment. This is in contrast to the allegation that people "change" or become "fake" depending on the situation, which I think is a refreshing and much-needed perspective. It's not that someone is being "fake" if they don't act the same all the time; it's that one of their different selves might be coming through based on the circumstances surrounding them.

Personally, I really like the concept of having more than one authentic "self." I think it's actually freeing to embrace different aspects of your personality, even if some only appear in certain situations or environments. We are all nuanced and wonderful in our own ways, and there's not just one "real" way to be ourselves.