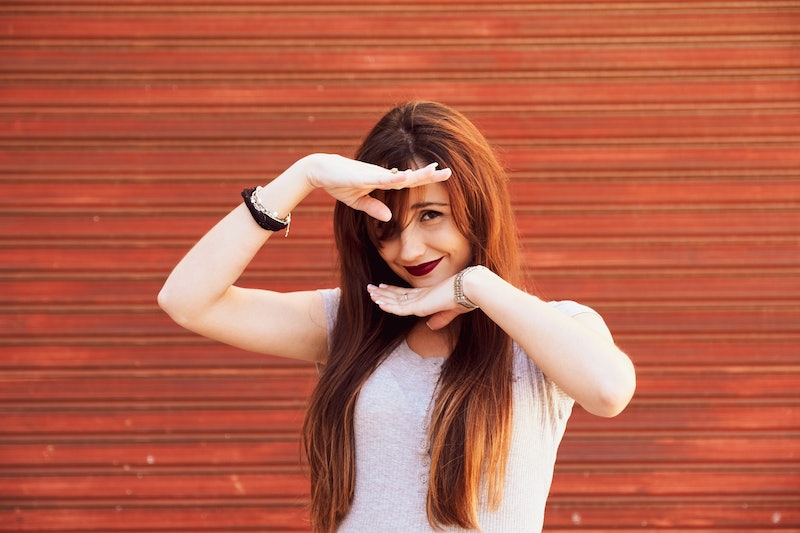 If you're in possession of a resting b*tch face (or resting depressed face, or whichever expression people are talking about this time around), you know that even involuntary expressions have an enormous influence on social interaction. Psychologists are always turning up new weird facts about facial expressions, and this week, researchers found something particularly interesting: The act of smiling may have roots stretching all the way back to our primate ancestors, millions of years in the past.

At least, that's what a study from Kyoto University's Primate Research Institute in Japan suggests. In a paper published earlier this week, researchers observed seven newborn Japanese macaques — primates whose ancestors diverged from humans' millions of years ago — focusing on their number of "spontaneous smiles." These primitive facial movements resembling smiles occur in both primates and human babies, usually when they're napping. In addition to possibly providing a window into a baby's development, spontaneous smiles are also thought to be the evolutionary origins of real smiles and laughter, which develop later in life. Researchers have long known that primates like chimpanzees laugh and smile like humans, but according to the Kyoto University researchers, baby Japanese macaques regularly show spontaneous smiles as well.

In addition to the adorable mental image, this information suggests that the evolutionary origins of smiling go back further than we thought — not just back to whichever ancestor humans share with chimpanzees, but perhaps all the way to the one we share with Japanese macaques.

"Since we see the same behavior in more distant relatives, we can infer that the origin of smiles goes back at least 30 million years, when old world monkeys and our direct ancestors diverged," study author Masaki Tomonaga said, according to Science Daily.

It's fascinating stuff, but there's plenty more where that came from. Here are six facts about facial expressions you might never have realized on your own.

1. There Are At Least Four Basic Expressions

According to most psychologists (particularly Paul Ekman, who put forth this idea in the first place), there are six universal emotions: Happy, surprised, afraid, disgusted, angry, and sad. Each of these can be identified by their corresponding expression. Admittedly, recent research has called this claim in to question; according to a team of Scottish scientists in 2014, the basic expressions can be distilled further into just four categories: Happy, sad, afraid/surprised, and angry/disgusted. However, the fact remains that some facial expressions convey the same emotions, no matter where you are.

Finally, people afflicted with a mildly grumpy resting face are validated. According to a 2015 study, most people's "neutral" faces aren't very neutral. The computer program researchers designed to read expressions rated expressionless faces as about 97 percent neutral, which leaves three percent of expressed emotion. Here's the interesting part: Researchers found that people with so-called resting b*tch face have double that amount of underlying emotion — usually in the form of contempt. Ergo, resting b*tch face exists! Unfortunately, it also makes people scared of you. And honestly, maybe we should give it another name, because the term itself is kind of problematic.

3. Your Expression Affects Your Emotions

Some expressions may involuntarily reflect your emotions, but can your expressions involuntarily change your mood? According to the well-documented facial feedback hypothesis, that's exactly what happens: Your facial expressions can intensify or even directly influence your mood. Charles Darwin suggested something similar in The Expression of the Emotions in Man and Animals, and by the 1980s, it had become a well-regarded theory. Today, research has shown that smiling can make you feel happier, frowning makes you sadder, and showing no expression makes your emotions less intense.

4. Geniune Smiles Have A Name

Have you ever looked at a picture of someone smiling and noticed that they still appeared totally miserable? That's because fake smiles are surprisingly easy to recognize, to the point where psychologists have pinpointed the exact muscles used in them. Genuine smiles, called Duchenne smiles for the French doctor who discovered them, involve the involuntary and voluntary contraction of the zygomatic major and orbicularis oculi muscles. Fake smiles, on the other hand, just use voluntary contraction of the zygomatic major, leaving the watcher with a sense that something is a little off.

If you're the type of person to remain stone-faced even when confronted with a video of cats with brain freeze, there could be a genetic explanation. Culture and personality are huge factors, of course, but research from Northwestern University suggests that the manifestation of a certain gene affects the depth of your emotions. People with shorter versions of the gene tended to laugh and smile more, while those with the longest versions were less likely to express themselves.

6. Other People Unconsciously Influence Your Mood

Smiling doesn't just improve the mood of the person doing the smiling. According to a 2013 study, the simple act of seeing someone else smile can lower aggression in the viewer. Furthermore, researchers have found that laughter really is contagious; when we hear someone laugh, the brain prepares certain muscles in the face to grin. I'd say that's something to smile about.

More like this
How To Fight For Reproductive Rights, Based On How Much Time You Have
By Courtney Young
Michigan’s Governor Is “Going To Fight Like Hell” To Protect Abortion Access
By Andrea Zelinski
4 Most Outspoken Zodiac Signs
By Kristine Fellizar
4 Zodiac Signs Most Likely To Be “That Girl”
By Kristine Fellizar
Get Even More From Bustle — Sign Up For The Newsletter