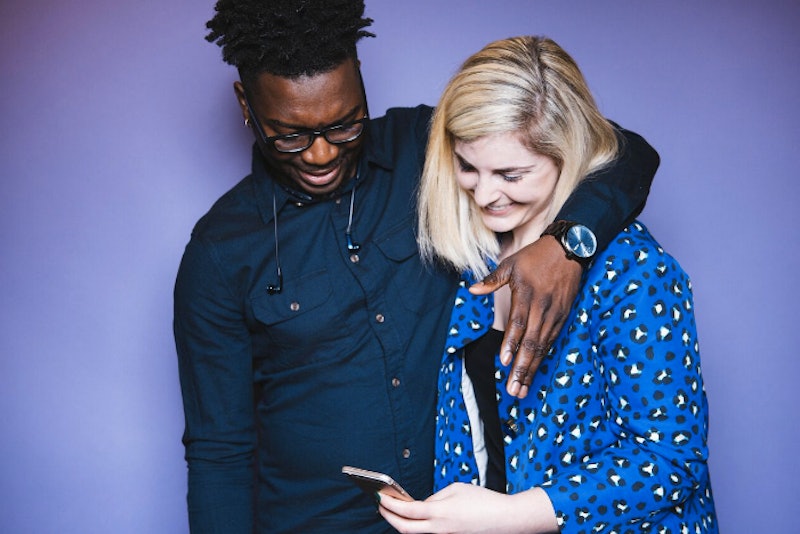 Here's a Millennial admission that my grandparents wouldn't be able to comprehend: Instagram contributed to the end of my last relationship. As in, the presence of the online social media app in our phones,lead to the demise of our offline love lives. While it might not have been clear at the time, our involvement with the app put a wedge between us. And the amorphous perimeter between being unfaithful and social didn't help things. Over the course of my last relationship, Instagram was becoming more and more of a thing that everyone had and everyone used. It finally was getting past the territory of, "Are you on Instagram?" but rather, "What's your handle?"

Shortly after I met said boyfriend, we "followed" each other. We'd like each other's pictures seconds after they were posted, regardless of what we thought of them. We were a couple and we were on Instagram — that's what couples did. At first, it wasn't a big deal. Instagram was just a floating platform in the periphery which really had no bearing on our relationship with each other. But then, over time, it came more and more into view. Like that one time when I posted a picture we took together. We were in the park, my head was in his lap, we looked happy, I captioned it "A Sunday Kind of Love" because it was Sunday and we were in love. Shortly after I posted it, he texted me, "Hey, can you take that down?" I was incredulous. Was he embarrassed of me? Was I secret? It was getting so many likes. "I don't like to share my personal life online," he said. It didn't make sense to me. Wasn't that what Instagram was for? "I'm just not a social media relationship guy," he said a few weeks later when I brought it up again. I couldn't find a way to not be offended. That was the tip of the iceberg.

A Conversation Is Necessary

Though it might seem ridiculous and Millennial, have a conversation with your partner early on about Instagram. Ask them how they feel about sharing their private life. Ask them about how they use it and what they think about it. People use it for different reasons and in different ways. If you're not OK with your partner following other people's accounts and liking nudies and sexy pics, say so. You're not ridiculous. These are real people and you have real feelings. Your new partner's online habits might deter you from engaging in an offline relationship.

If your partner argues that following lingerie model's accounts or celebrity's accounts don't count, remind them that models and celebrities are people, too. We're all entitled to have celebrity crushes, but making an effort to communicate with someone for sexual or romantic interests, whether they're famous or not, is not OK when you're in a relationship. Wandering eyes are wandering eyes, doesn't matter where they're looking.

Liking A Picture Is Communicating With Its Poster

Looking at a picture is one thing, liking a picture is another. It's a physical effort made to let that poster know that you like what you see. If your partner wouldn't go up to a girl at the beach and say "Hey, I like how you look" while you're standing next to them, they shouldn't go on Instagram and do it either. Look all you want. Once you hit that double tap, you're doing something else.

Posting A Picture Of Your Partner Goes Along Way

When you meet someone that you're interested in, you look them up online to see if they're in a relationship. Chances are, if they're happily taken, there's pictures of their partner on their social media. This is just how things are. So if you post a picture of your partner, you're doing two things that are considerate: you're telling your partner that you're proud to be with them, and you're telling the rest of the internet that you're taken.

Some people have jobs, ethics, religious beliefs, or family ties that require them to appear a certain way, on and off line. If your partner has personal or professional concerns about their digital footprint, let it be. Don't pressure them into including your relationship into their cyber DNA.

Ask For Permission Before Sharing Personal Pictures Of Your Partner

If you're not sure how your partner feels about social media, ask before posting. Post as many pictures of yourself as you want, but before you share the intimate details of your personal life online for the world to see, make sure the other half of that relationship is OK with it. They have a right not to be.

Consider Your Intentions Before You Do Anything

No Stalking, No Exceptions

Just don't do it. Don't look for information that you can't find at face value. If your partner wants to tell you about their ex, let them. If your partner prefers you get to know them through your experiences together rather than the pictures that you unearth online, respect that. Resist the temptation to stalk, it's not healthy.

Make sure your online behavior is not getting in the way of your offline life and recognize when the two are the same. If you're having trust issues offline because of behaviors online, don't treat them any different. Just because the issue is presented digitally doesn't mean it's not a reality.

More like this
Here’s What TikTok's "Mascara” Trend Is *Really* About
By El Hunt
30 Sweet Valentine's Day Caption Ideas For Long-Distance Relationships
By Syeda Khaula Saad and Carolyn Steber
23 Super Sweet Things To Write In A Valentine's Day Card
By Karen Belz and Lexi Inks
The 3 Zodiac Signs Most Likely To Get Married Later In Life
By Kristine Fellizar
Get Even More From Bustle — Sign Up For The Newsletter
From hair trends to relationship advice, our daily newsletter has everything you need to sound like a person who’s on TikTok, even if you aren’t.