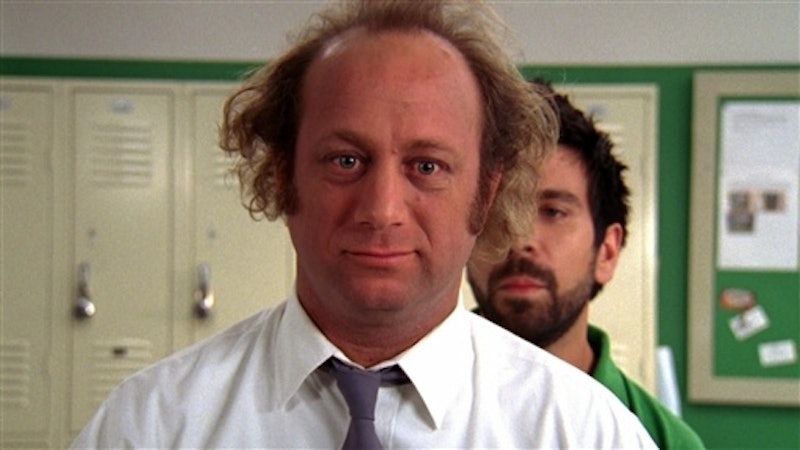 Precious few characters could ever come close to the bizarre, but sage Jedi Master Yoda, but I feel like Chuck's Jeff is in the running. I know what you are thinking: Jeff? Really? Yes, Really. For all of his weirdness, Jeff Barnes was an essential member of Chuck's crew and a wise soul once you parsed through his carbon monoxide tainted turns of phrase. Just like with Yoda, there was way more to Jeff's persona than what he immediately presented to the world.

Thanks to his zen nature, Jeff lived his life with a deep appreciation for the small things like long naps at work and being in a band with his best pal Lester. Jeff was wildly unconventional which often led to misunderstandings. He was also older than almost all of his co-workers and was basically the Jedi Master of the Buy More since he was the store's first-ever employee.

Jeff's true Yoda nature came through in the random advice and words of wisdom he doled out to Chuck, Lester, Casey, and the rest of the extended Buy More family. The unassuming Jeff always had something on point to say, it was up to the other characters to take the time to interpret Jeff's coded genius. If you need more convincing then check out these 13 Jeff quotes that prove he was the Yoda of the Chuck universe.

1. When He Weaved Karma & Culinary Delights Together To Form A New Philosophy

"If you love something, let it go. If it comes back, you can eat it."

OK, so Jeff's take on a familiar adage seems a bit unusual, but it likely meant if something returns to you after you let it go you were always meant to have it. Or if you let a doughnut go and then find it again later, you are supposed to eat that doughnut.

2. When He Put Friendship First

"If I could travel in time, I'd go to Lester's birth. I'd love to see the look on your face when you emerge from the vaginal canal."

Is that a weird and creepy thing to say about your best friend? Sure, but it is also Jeff's way of letting everyone know they should value their friendships no matter what exciting opportunities come their way.

3. When He Got Super Close To The Truth

"What if you were the unwitting target of a ninja vendetta, and he returns tonight to strangle you with his nunchucks?"

Everyone dismissed Jeff's ramblings for nonsense, but he was always super close to figuring out Chuck's secret agent life.

4. When He Got Way Too Real

"Don't you get it? None of them matter. Chuck may try to replace her... but when he's with Sarah, the light in his eyes shines brightly."

Jeff knew the secrets of Chuck's heart, and also had the power to make Big Mike cry.

5. When He Lamented Morgan's Maturation (But Was Totally Secretly Rooting Him On)

"No. He's focused, responsible, driven. Pains me to see a man end up like that."

A good Yoda is always playing mind games, and I am pretty sure Jeff was secretly proud of Morgan. Well, I am 82 percent sure.

6. When He Didn't Let On How Smart He Was

"I always knew it was fake."

Like Yoda, Jeff turned sounding loopy into an art form, but he was a smart guy with wisdom to offer deep down.

7. When He Revealed Parts Of His Bizarre Backstory

"I don't rat. Only thing my mother taught me from the joint."

Jeff lived a strange life, but because his life was so unusual he was able to see the world from a different perspective. Every now and then his perspective proved to be super useful.

8. When He Went Into Prison Mode

"Grab a shiv and make your move."

Jeff was a natural born trainer. Now, he would have been useless when it came to teaching someone how to harness the power of the Force, but if anyone needed tips on how to survive in prison, Jeff was there to help.

9. When He Demonstrated His Zen

"Water would only dilute this feeling."

When life handed Jeff an experience he wanted everyone to experience it to its fullest.

10. When He Sagely Avoided A Faux Pas

"Originally, we were going to go with the name 'Jester,' but we didn't want people to associate us with a couple of fools."

11. When He Proved To Be A Valuable Member Of The Team

Everyone underestimated Jeff's ability to help. Sure, he was odd, generally completely out of it, and sometimes unsettling, but he had a wealth of seemingly useless knowledge that came in hand when the gang found themselves in trouble at the Buy More.

12. When He Used His Connections

"I know a really good morgue that gives discounts on unclaimed merchandise."

Yoda had Jedis, but Jeff had his morgue guy.

"Behold the flames of destiny."

Jeff was born to wield a flamethrower.

It is easy to overlook Jeff, but thanks to his odd proclamations and unending loyalty he truly was the Yoda of the Chuck universe.