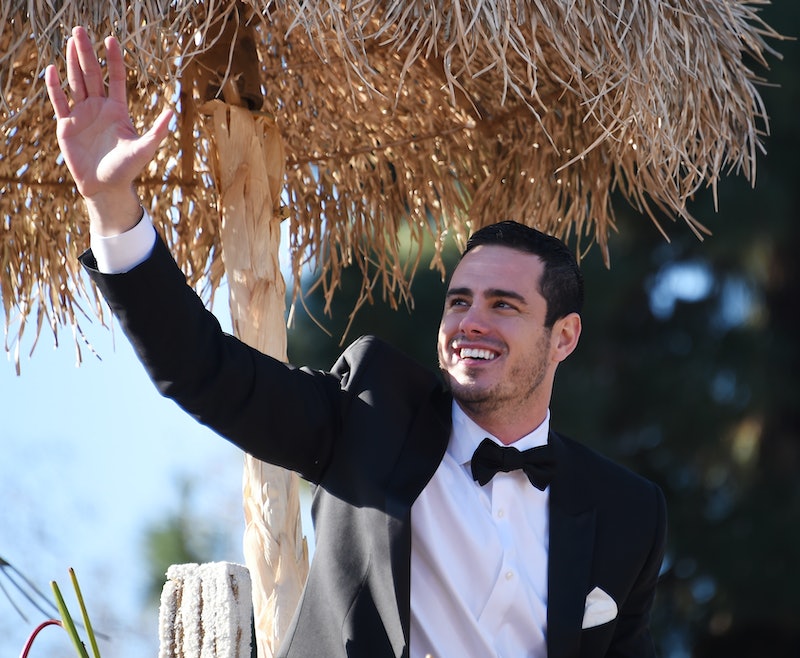 Did someone write in a magical fan-fiction notebook that Ben Higgins and JoJo Fletcher would go on a double date after her season of The Bachelorette, and then it came true? Because that's what this feels like. Ben and JoJo actually went on a double date with their fiancé(e)s, Lauren Bushnell and Jordan Rodgers, in Hollywood on Thursday. According to an Us Weekly source, the meet up was filmed for a scene of Lauren and Ben's new show Ben and Lauren: Happily Ever After? coming to Freeform this fall. I could understand having any of the other suitors who Lauren was close with to film for the show, like Amanda Stanton or Becca Tilley, but JoJo? She was, after all, one of the two women Ben told he loved when he was the Bachelor, so in every way this must have been awkward. Or was it?

Leave it to good ol' Ben Higgins, one of the kinder and sweeter Bachelors, to ease the tension of what could have been a very awkward lunch date. In an interview after the date, Ben told TMZ some of the advice he and Lauren gave the newly engaged Bachelorette stars, how he felt about the lunch overall, and whether his emotional feelings for JoJo got in the way of having a good time.

Sweet, nice, naive Ben talking to paparazzi with no qualms is what makes him so great. While this could have been such a crazy uncomfortable situation, Ben turned it around and explained, perfectly, "I think it could have been awkward but we're kind of used to awkward situations at this point." Spoken like the true politician he never was. Consider that tension eased from Ben to JoJo. Even she didn't feel as uncomfortable as it could have been, and told the cameras, "[Some] good advice from good friends."

And there you have it. The fan-fiction came to life, the heartbreak is presumably over, and their relationships have turned into friendships. The only things to look out for now is if Ben and Lauren or JoJo and Jordan have more of these double-dates, if Ben and Lauren: Happily Ever After? brings other Bachelor Nation stars and couples into the mix, or if this really was just a one time thing for the show. All we know now is that there's definitely something to be said for the maturity of Ben and JoJo, finding love on their own terms and moving past the "awkward exes" stage to the "good friends" stage.