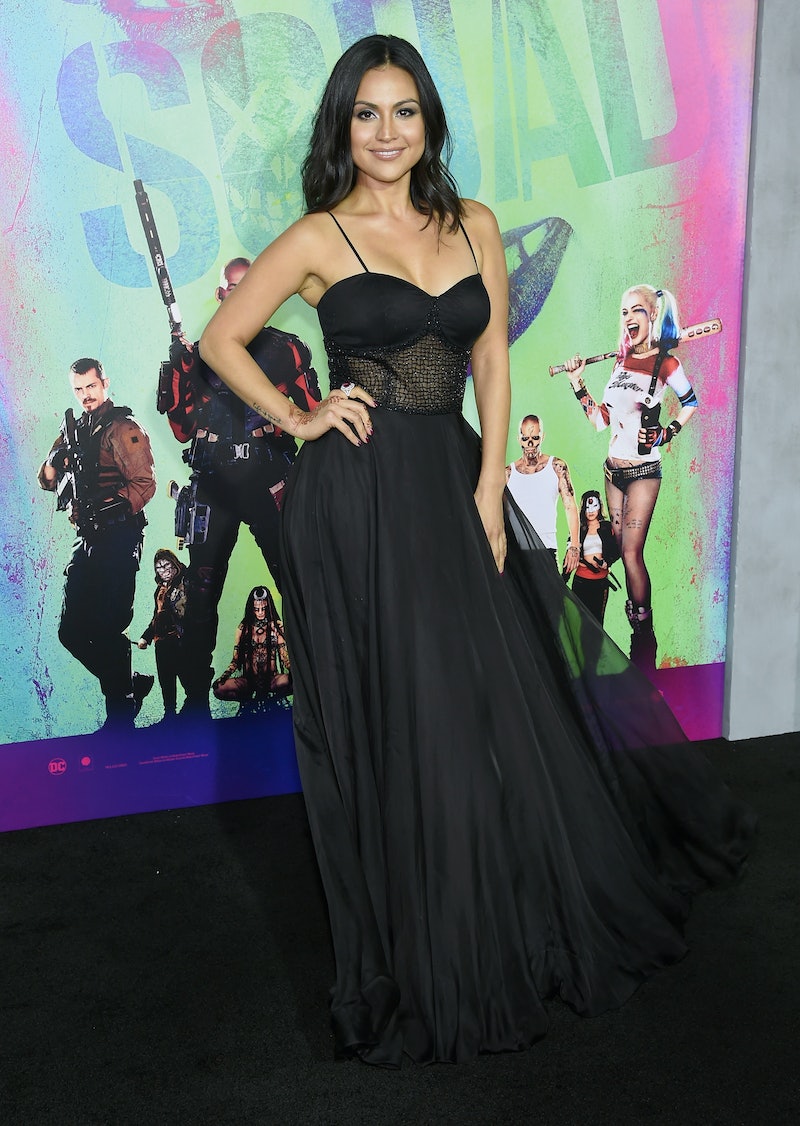 One of Suicide Squad's many missions is to show that villains can be a team just like heroes. Maybe even better. What's refreshing to see is that this ensemble brings racial and gender diversity that is often lacking in other "superhero" movies. Corina Calderon, who plays Diablo's wife Grace in Suicide Squad , joins a list of Latina and Latino actors in superhero films that is far too short. In an interview with Bustle, the End of Watch actor explains why representation is important to her, saying:

Growing up, watching TV, some of my favorite shows like Full House or even like Growing Pains or Punky Brewster, I loved watching TV ... but I never really saw myself in those stories. I didn't. I knew I wanted to be an actress since I was a little girl, but I always thought it was part of another world — because I didn't see anybody that looked like me, or my sisters, or my cousins.

We call for more female superheroes and more female leads in general all the time, but chances are when those characters do appear, they will invariably look like me, a white cisgender woman, over, and over, and over. That's not enough. Captain Marvel, Black Widow, and Agent Carter are great characters that I love, but they're all white. Representation doesn't end there, and Calderon is all too aware of this.

"Yes, we have Latina actresses who have been in [superhero] movies. We have Zoë Saldana [in Guardians of the Galaxy] but she was green. You know what I mean? She was green," Calderon says, also mentioning Rosario Dawson as a Latina actor featured in superhero media. However, she then adds, that she would still like to see a Mexican superhero, "to get more specific."

I would even note that Dawson's role in Daredevil, Luke Cage, and Jessica Jones is still television, and therefore doesn't count as seeing women of color on the big screen. For whatever reason, television is often a few steps ahead of film when it comes to diversity. There are more men and women of color in the Arrow-verse, on Heroes, Misfits, and Agents of S.H.I.E.L.D. as well.

"I would love to see... no I would love to be," Calderon corrects herself. "There I go, thinking 'put it outside of myself.' I would love to be a Latina superhero. Just strong, fierce, with superpowers. I already consider myself... I'm very strong and fierce, especially in this business. You have to be."

So — if Marvel's looking to cast Anya Corazon, also known as Spider-Girl, I know who to call! Or, who knows, maybe Calderon as Grace can show up in a future DC Comics film as Aquagirl, the Huntress, or Black Canary. That would be a fun twist, for sure.

Calderon's character in Suicide Squad is integral to humanizing Diablo, which I think is important as well. Comic book characters are often based on archetypes, which can become stereotypes if you aren't careful. "This crazy Suicide Squad," says Calderon. "This squad of crazy people, they have a heart. Even if their heart is dark, they have a heart and they're fighting for something. They all have a battle. They all have a story. Everyone has a story, even the Suicide Squad. They came from somewhere."

If you ever scoff at those who urge Hollywood to continue to push against the old norms and cast more people of color in films or think it's "unnecessary," think about the kids who are going to dress up for Halloween this year as the Falcon, Black Panther, Rey from Star Wars, or Katana from Suicide Squad. Think of all the little girls pretending to be Ghostbusters right now. Doesn't that make the world a better place?

"I have family members and I have friends who are huge comic book fans," Calderon says. "We can be the heroes too."