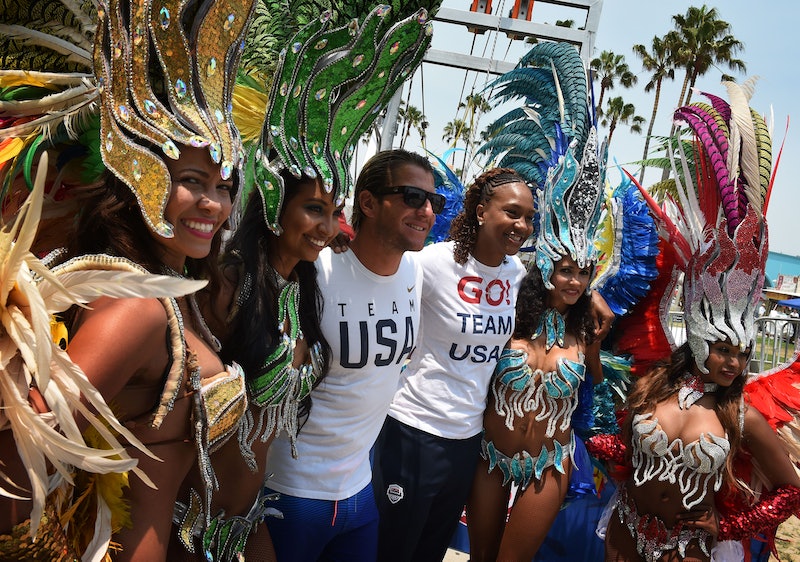 After months of anticipation (and criticism) the curtain is finally rising on the Summer Olympics. The United States has sent 554 athletes to the 2016 Summer Olympics in Rio, but don't expect to see them all at the games' opening ceremony. Although the Olympics' more than four-hour-long kickoff is being touted as a can't-miss spectacle, many athletes will opt to sit out of the ceremony's Parade of Nations in order to get a good night's sleep before the first competitions of the games begin the following morning. So, which American Athletes are attending the opening ceremony? While we won't know the full roster of U.S. athletes participating in the opening ceremony until the event ends, there are a few faces you should keep an eye out for.

With a number of competition events set to start just after the sun rises Saturday, Aug. 6, participation in the Olympics' opening ceremony isn't compulsory for athletes. Many, like U.S. shooter Sarah Scherer, who is scheduled to compete in the women's 10-meter air rifle qualification round bright and early on Saturday, will likely skip the opening ceremonies in favor of last-minute training and a solid eight hours sleep.

While swimmers and rowers are also often absent from the opening ceremonies, Michael Phelps, the most decorated Olympian of all time, will be the U.S. Olympic team flag-bearer. This will be the first Olympic opening ceremony Phelps has ever attended, despite competing in four other Olympic Games. However, rumor has it Phelps will duck out of the ceremony early to head back to the Olympic Village.

Even without all 554 members of Team USA in attendance, the United States is sure to be well represented when athletes from more than 200 countries march into Rio de Janeiro's Maracanã Stadium Friday evening to open the 2016 Summer Olympics. Be on the lookout for your favorite Olympic athlete, as they will likely be at the exciting open ceremony.