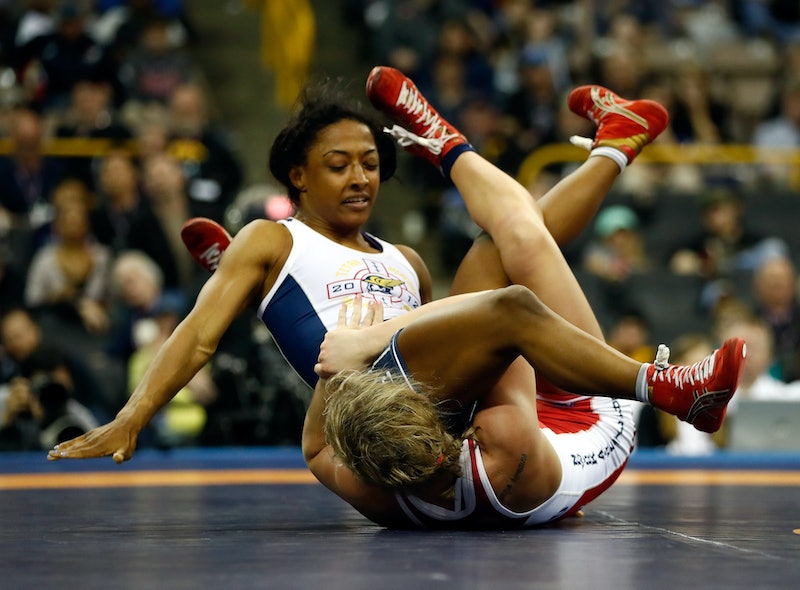 When it comes to the Olympics, there's something for everyone. Some people love to watch swimming tournaments, while others get a rush from watching track and field races. While the scoring for some events is easier to understand than others, some sports, like wrestling, might cause spectators to wonder: How does Olympic wrestling scoring work?

The sport, which is divided into freestyle and Greco-Roman styles, awards points based on technique, skill, and the ability to subdue one's partner. There are two types of points in Olympic wrestling: technical points and classification points, as well as an additional category of scoring used to break ties.

Technical points, as the name suggests, are awarded based on technique during a match. They start at one and increase by one-point intervals. A wrestler is awarded one point for moves such as applying a correct hold and reversing control, when the player who was pinned reverses the hold and pins their opponent. As the difficulty of properly-executed moves increase, so do points.

Classification points are awarded at the end of a match, and are based on overall performance. Wrestlers can either win by being the person who is not injured or withdraws, or by technical superiority, meaning they won more technical points than their opponent.

In April 2013, the International Olympics Committee (IOC) stunned the international wrestling community by announcing that they were dropping wrestling from the 2020 games due to low viewership, ticket sales, and a lack of diversity and ethics among the sport's governors. In response, United World Wrestling (wrestling's governing body) announced that they were changing the rules of the sport to make it more exciting for viewers, and introduced measures to be more inclusive of women in the sport, including a female vice president. In September 2013, the IOC reversed their decision and reinstated wrestling for the 2020 Olympics.

Due to the drama regarding whether or not the sport would continue past the 2016 Olympics, some consider this year's wrestling tournaments a boon for the sport, allowing them to showcase their new rules and prove why they are an integral part of the Olympic games.