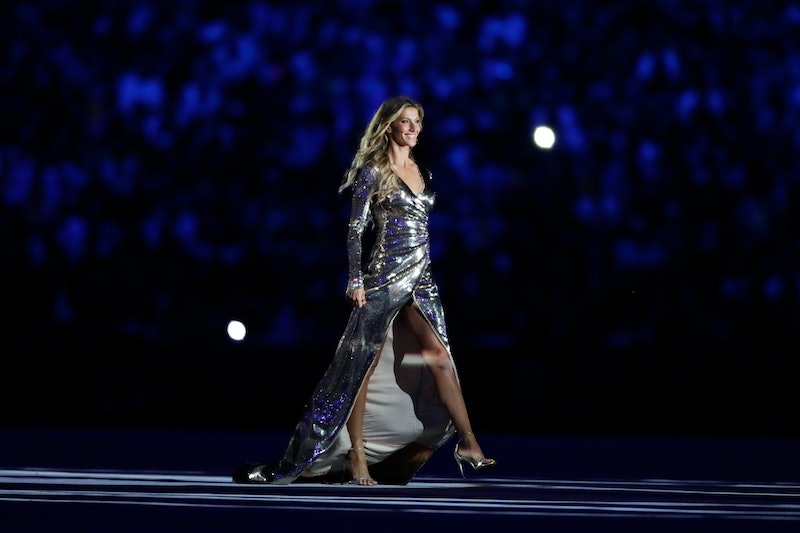 It's not unusual for celebrities to support their home nation during The Olympics, but Gisele Bundchen's 2016 Olympic Opening Ceremony performance was patriotism on a massive scale. The model catwalked for a final time down what she calls the longest runway of her life, and she totally slayed while doing it. And, as with every major worldwide event, the internet was out in full force to watch and to meme-ify. If a huge television occasion doesn't bring out the meme-makers, did it really happen? No. So, it's no surprise that Gisele Bundchen's Olympics appearance memes began showing up almost as soon as she took the stage.

The model is from southern Brazil and the Rio Games are close to her heart. Ahead of her performance to set off the Games, she posted to Instagram to highlight her excitement at being chosen to be apart of the ceremony. The photo is a silhouette of her making a heart with her hands with a Brazilian flag in the background. To complement the picture, she posted a lengthy caption in both English and Portuguese. In part, she praised the chance for peace and unity that the Games can bring for the world.

The Olympics symbolize so much for our global community. The unity that is felt is amazing and gives me goose bumps ... I am so happy to be part of the opening ceremony in my homeland and to celebrate these bright stars from around the globe ... As I walk down tonight on the longest runway I have ever been on I will be sending out all my love and positivity. I am humbled and honored to be part of this historic moment for my country. I believe that the unity is the key to creating a world filled with kindness, gratitude, peace, and love.

But, the model wasn't the only one taking to social media to post about her part in the ceremony. Here's what the best of the Internet had to say about her performance.

Gold medal for sure.

I'd Watch For An Hour

No one walks like she does, that's why she's the best!