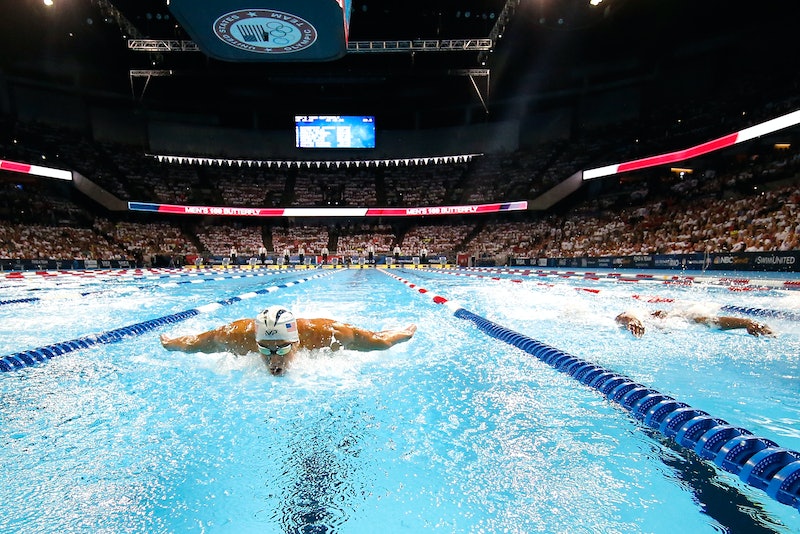 USA Swimming heavyweight and 11-time Olympic medalist Ryan Lochte's groin injury is one of many for the famous athlete. Despite dealing with the bad stroke of luck, he will be back for his third Olympics. Though Lochte's injury couldn't keep him away from Rio, it did put a damper on the 32-year-old during the Olympic Trials meet.

Lochte will only be competing in one event at this summer's games — the 200-meter individual medley. The 200 IM, for those who didn't spend the vast majority of their childhood stuck in over-chlorinated hothouses, is a mid-length race where athletes start off with 50 meters of butterfly, followed by 50 meters of backstroke, then 50 meters of breaststroke, before finishing off with a 50-meter freestyle sprint.

The 200 IM is actually a shorter version of the same race where Lochte suffered this season's painful groin injury earlier this year. During the 100 meter breaststroke leg of the 400 IM, Lochte pulled a muscle in his groin that left the Olympic medalist visibly limping on deck after he got out of the pool. While this wasn't the first time that he was struck with this specific malady, groin injuries are a pretty common injury for breaststrokers, especially when dealing with a choppy pool.

Lochte holds the world record in the 200 IM, set during a swim in Shanghai in 2011, but it is unlikely that the American swimmer will be able to get a personal best this year in Rio after this injury kept him from even qualifying in his other events.

This also isn't the first time that an injury has kept the 32-year-old from reaching his full potential in the pool. Lochte has made a bit of a name for himself due to the nature (somewhat amusing) and frequency (yearly) of his injuries. In 2008, for example, Lochte fractured his shoulder falling out of a tree while playing hide-and-go-seek with his younger brother. He's also been briefly sidelined from scooter accidents, playing with his Doberman, and reaching for his cell phone.

Despite Lochte's less-than-graceful showing on land, it is clear that the 11-time Olympic medalist and three-time gold winner is able to bring it to the pool and give his fellow Olympic swimmers a run for their money. Whether or not Lochte will medal this time around remains to be seen — check out the opening heats of the men's 200 IM on Wednesday, Aug. 10 starting just after 10:00 a.m. local time to see him in action.