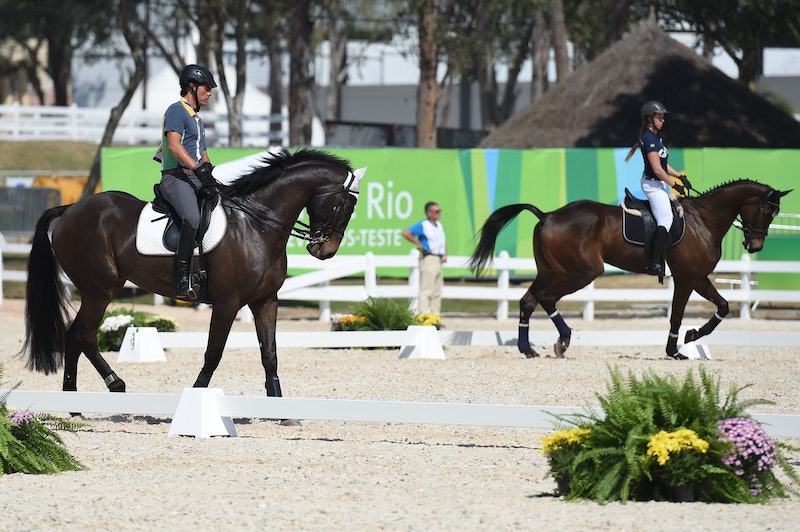 The 2016 Olympic Games in Rio formally commenced as the opening ceremony welcomed 10,000 athletes from around the world. This year, returning U.S. Olympic gold medalist and swimmer Michael Phelps represented Team USA as he carried the American flag during the opening ceremony. So as we prepare to watch some of Team USA's top competitors in the coming weeks, let's take a look at who is on Team USA's Olympic equestrian team this year.

We can certainly expect a lot from this year's U.S. Olympic teams — they've already broken an Olympic record before the competitions even started, as the 2016 American team will bring the most female athletes in Olympic history. Some of those athletes will be representing the equestrian team, which will be competing in dressage, eventing, and show jumping, with 12 total athletes on the team. In dressage, the athletes representing Team USA are Steffen Peters, Laura Graves, Allison Brock, and Kasey Perry-Glass. Peters has competed in three Olympics and won a bronze medal at the 1996 Olympics in Atlanta, Georgia.

Representing the USA equestrian eventing team are Boyd Martin, Phillip Dutton, Clark Montgomery, and Lauren Kieffer. Martin competed in individual eventing in the 2012 Olympic Games in London. Dutton is the oldest Olympian on the 2016 U.S. team and he will be competing in the eventing portion, as well. This will be his sixth Olympic competition, and his third for the United States — he previously competed with Australia's team. Kieffer, who is also competing in eventing, was ranked earlier this year as 12th in the world in the sport.

With the USA equestrian show jumping team, competitors include Lucy Davis, Kent Farrington, McLain Ward, and Beezie Madden. For Davis and Farrington, this will be their first time competing in the Olympics. Farrington is ranked sixth in the world in the sport. Ward and Madden, on the other hand, are considered two of the team's "most successful equestrians ever," according to Team USA, and together they hold a total of five Olympic medals, with Ward ranking first in the world. Over the years, the U.S. show jumping team has won 16 total Olympic medals, Team USA reported.

The U.S. equestrian team is definitely impressive. In the years leading up to Rio, they have won a total of 41 Olympic Games medals and are expected to take a few more medals this year. The equestrian events will take place at the Olympic Equestrian Center in the Deodoro Zone, and the competitions include both team and individual events.

You can check out the U.S. equestrian team compete in eventing from Aug. 6 to 9, dressage from Aug. 10 to 15, and jumping from Aug. 14 to 19. You definitely don't want to miss out on the star power of this team, so be sure to tune in as the Games begin.