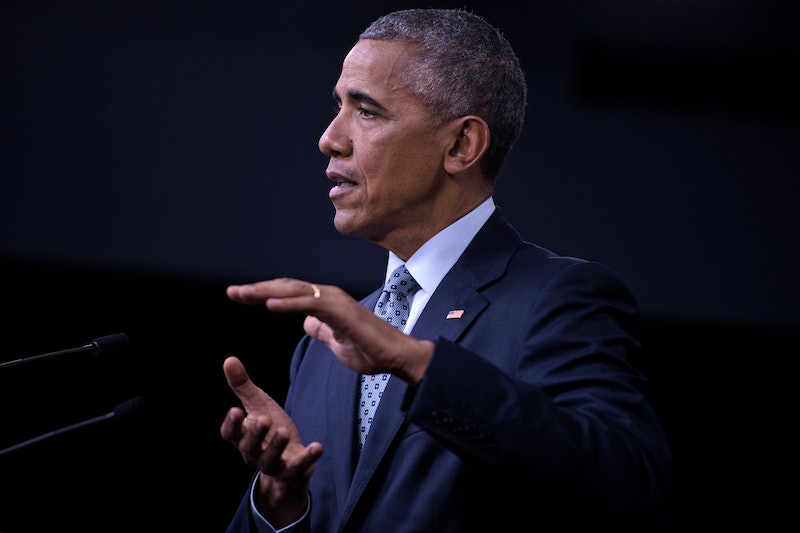 As one of the biggest international television spectacles, the Olympics have a way of attracting praise from important people. Earlier tonight, none other than President Obama praised the diversity of this year's Olympics on Twitter.

In a series of tweets, President Obama first said that he is proud of Team USA for their "unity and diversity," and said that they remind the world why America "sets the gold standard" at the Olympic Games. He followed it up with a tweet about the newly-founded refugee team, who he said proves that "you can succeed no matter where you're from." This statement speaks to the president's unlikely story: Born of a white woman from Kansas and a black man from Kenya, he is the poster child for the sort of diversity that events like the Olympics aim to showcase.

From Team USA's proclamation of "Many Faces, One Team, One Mission" to the body diversity on display at this year's Olympics, much digital ink has been spilled extolling the virtues of diversity that the Rio Olympics aims to uphold. The concept is so popular that "unity in diversity" is already an unofficial motto of the 2020 games in Tokyo, and they have a newly-designed logo to prove it.

The Olympic games are undoubtedly one of the most diverse events in the world. It not only brings together people of all races and nationalities from across the world, but it also brings them together to perform a vast array of sports.

Sports commentator Jeff Rivers wrote in The Undefeated perhaps the most poignant reason why Team USA powerfully depicts the diversity of our country:

I’ll be smiling on Friday when our nation’s Olympic team marches by in Rio de Janeiro. This year’s 555-member team, our largest ever, is rich and powerful in its diversity, just as our nation is. Our Olympians hail from Maine to Hawaii. Women make up 292 of the members. With last names like Armstrong, Hernandez and Zeng, our Olympic team represents most races, creeds and ethnicities found on the U.S. Census form.

The introduction of the refugee team, the first of their kind, also sends an important message about diversity, not only of nationality and race, but also one of class. These athletes don't have access to the facilities even Olympians in developing nations have, and lack the stability that comes with having a settled home.

In other ways, their inclusion could be seen as tokenization, akin to busing in kids from the poor side of town in hopes of making a mostly-upper-class school become more diverse. Hopefully, they will experience nothing but graciousness from their fellow athletes in the Olympic Village, but the possibility of ridicule or patronizing behavior certainly exists.

Showcasing diversity is important because the world is not homogeneous. When the bureaucrats of the International Olympics Committee decided to have a team specifically for refugees, they made a concerted effort to be more inclusive of hardworking athletes everywhere, and that's something Obama was clearly proud of.