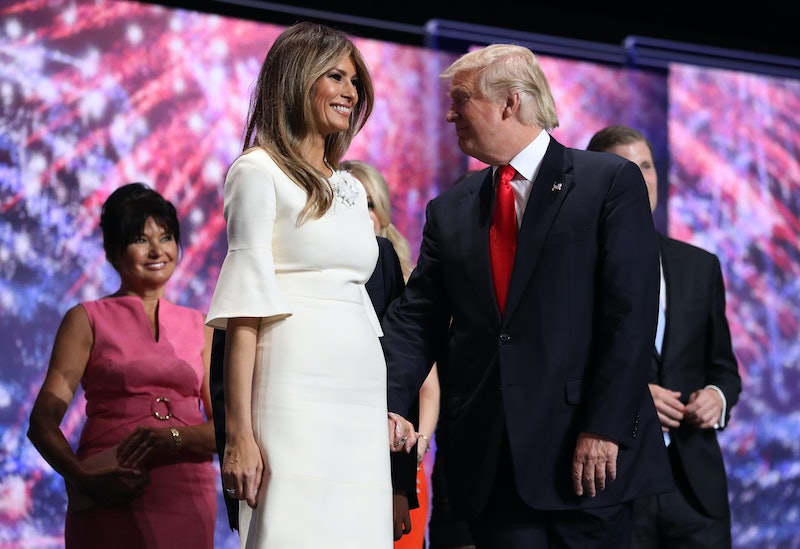 There's more controversy brewing about Melania Trump's immigration history. According to a Friday report from Univision, Melania Trump could have been married before Donald Trump, whom the GOP candidate's wife says was her first — and only — husband. This latest report follows a string of inconsistencies raised about Melania Trump's immigration story, including questions about when and how she obtained an American visa. Melania did not respond to Fusion's request for comment, but the Trump campaign has repeatedly noted that she came to the United States legally. The campaign has not, however, released her visa records or details.

Wildes, who was identified as a Hillary Clinton supporter, told Univision in a phone interview that Melania Trump received a green card in 2001 "based on marriage." However, Melania and Donald Trump were not married until 2005; they reportedly met in 1998 at a party. "Ms. Trump received citizenship in 2006 and prior to that she had a green card based on marriage," Wildes told Univision.

The immigration attorney added that he did not believe Melania Trump was in violation of any immigration laws. "Before that, she had a work visa and was in full compliance on her visas and never disrespected any of them. That has been made clear to me," Wildes told Univision.

The Trump campaign denied Univision's request for comment. The campaign has yet to release any public statements regarding this report.

Earlier this year, Melania Trump told CNN's Anderson Cooper: "I came to the United States, to New York, in 1996." However, a nude photo spread of Melania Trump from 1995 surfaced this week, thus exposing an inconsistency in her immigration story. Now, critics are trying to figure out whether or not Melania Trump was working illegally in the United States during the mid-1990s.

"I obeyed the law. I did it the right way," Melania Trump told Cooper in February. "I didn't just sneak in and stay here. So I think that's what people should do."

She added that she flew to Slovenia every few months to "stamp" her visa. However, work visas don't require stamps like that, as many immigration law experts have pointed out in recent days. Now, there's speculation that Melania Trump worked illegally in the United States on a travel visa, not a work visa.

There is one thing about this whole Melania Trump-immigration mess: She may not have been paid for the nude 1995 photo shoot. Jarl Ale de Basseville, the photographer behind that photo shoot, confirmed to CNN this week that all of the models were unpaid.

Melania Trump has yet to comment on the Univision report about a marriage in 2001. On Thursday, the former model tweeted a statement regarding her immigration status, saying she has always followed the immigration laws of the United States.