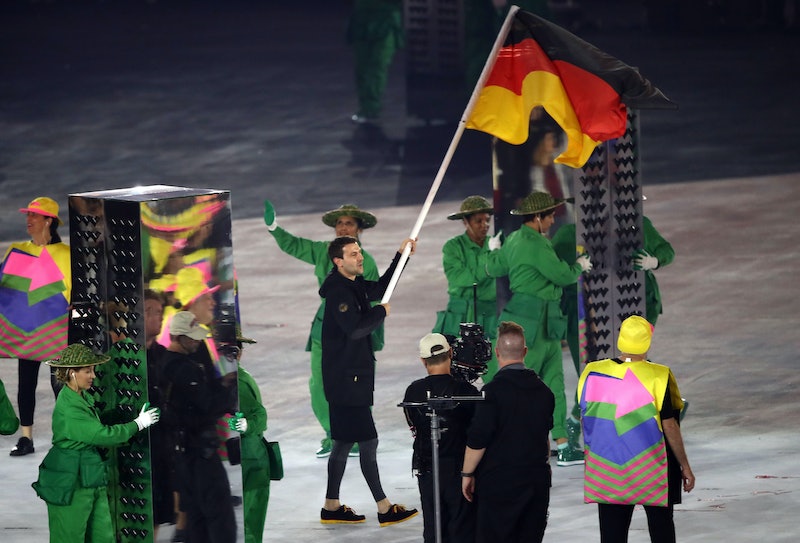 As the 2016 Olympics Opening Ceremony chugs along full steam ahead, some of the happenings during the event may have had some viewers scratching their heads. Yes, it was beautiful — but the fact that Gisele Bündchen's performance appeared majorly abbreviated and the fact that there were giant mirror boxes in the middle of the stage were definitely questionable. So, what was up with the mirror boxes at the 2016 Olympics Opening Ceremony? Turns out, they're actually not as confusing as they appear.

According to NPR, the so-called "mirror boxes" are actually homes for the 11,000 seeds that athletes (all 11,000 of them) were given to place into the boxes. Those seeds will then be transported to the new "Athletes' Park" in Rio de Janeiro, where they will (hopefully) eventually grow into 11,000 trees. It goes along with the Rio Olympics' theme of preventing global warming, and saving the country's rainforests. In addition to the mirror boxes, Judi Dench also read from the poem "A Fleur e a Nausea," which was written by Carlos Drummond de Andrade, and about a flower growing within a polluted city under circumstances that should have stopped its growth.

So, y'know, if you thought those mirror boxes were giant cheese graters like I did, good news: You're wrong, they're actually much more important than that. The more ya know!