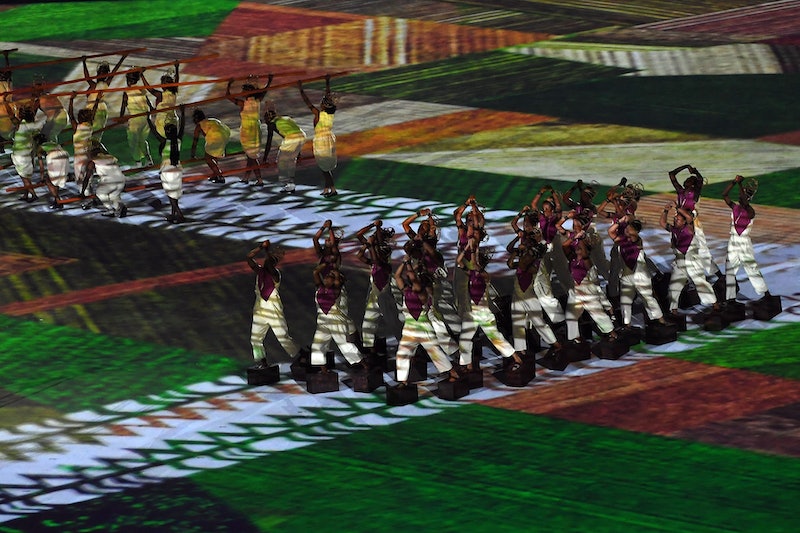 The Rio Olympics' opening ceremony came with some spectacular elements, pyrotechnics, talented musicians, and a serious dose of history. The Games were kicked off in style, with an interpretative history lesson about the country, starting from its lowly beginnings and extending to modern day. And the presentation didn't shy away from the less admirable parts of Brazilian history at all. In fact, the colonization and slavery of the country's past took center stage, with performers marching across the stage to the sound of drums and whips, meant to represent indigenous peoples who were struck down and Africans who were brought to Brazil as slaves to work on the sugar plantations. The meaning of the Rio Opening Ceremony was clear: Brazil is a country with a rich history, and that history is bloody and awful and dark and magical and inspirational and inclusive all at once.

It's a combination of cultures — many cultures which did not have a choice about being combined into this melting pot — and Brazil did not shy away from acknowledging that dark truth for this ceremony. It was a performance that was hard to watch; I found it very hard to watch, and I found it surprising that Rio would go there ahead of the Summer Olympics, and in a presentation meant to share their history and culture with the world. But it was also such a necessary addition to their presentation, so necessary that it makes other presentations look lackluster for missing their chance to include even the shadowy parts of their country's history.

It's no secret that many of the modern countries of the world were built through a combination of conquest and slavery. Whole books have been devoted to the Age of Discovery, i.e. the time in world history when the European countries decided to annex more land to their empires, whether or not there were already people living on those lands. The atrocities committed in each country's history is often glossed over or swept under the rug, especially during an event like the Olympics, which is meant to be a time to celebrate and showcase your country.

But Brazil seems to say that you can celebrate and showcase your country and acknowledge the atrocities that your country committed. That you need to take the bad with the good in order to get a true and complete picture of a country. And that anything less would be doing a disservice to the same history they are sharing with the world. The Rio opening ceremony seems to be Brazil saying that they aren't perfect, that it's impossible to look far into their history without seeing some truly awful things, but that they're learning, they're growing, and they've come this far to produce some really beautiful buildings, performers, and people who are a blend of all the cultures that have ever set foot on this land.

To see a country so boldly stand up and own the sins of their past, then use it to craft a better future — giving visibility and validation to the indigenous peoples and slaves whose lives they once destroyed — is a magical thing. Especially when it stands in contrast to the 2012 London Summer Olympics, which included a recap of British history in their opening ceremony that somehow decided that colonization didn't play a big enough part in that history to be included.

Much to the chagrin of the audience.

Even without the rest of the ceremony, this will be the most striking moment of the Olympics for me. When Rio decides to put on a show, they sure do it thoughtfully.