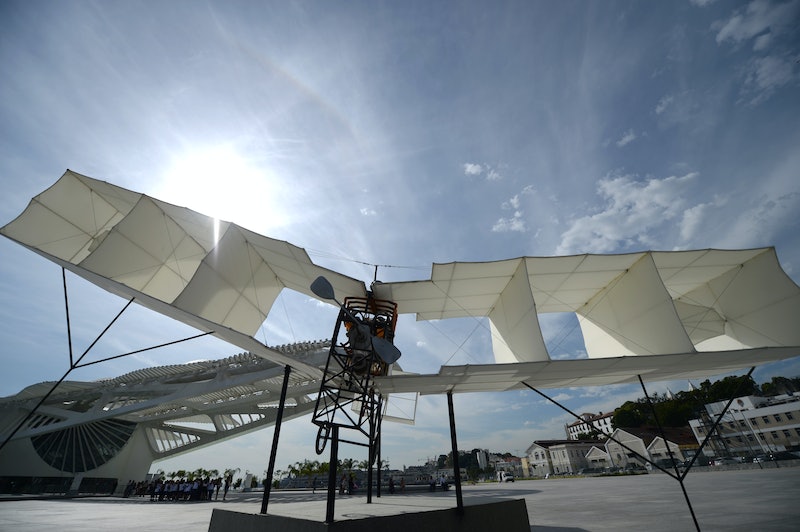 In the middle of a celebratory party featuring samba, Capoeira, fire-dancing, and catchy tunes, Olympic organizers took the opportunity to highlight a bit of global aviation history that's ignited some interesting debates. Foremost, viewers might find themselves wondering: Is the opening ceremony plane at the Rio Olympics real? The answer is yes, as it was a replica of one of the earliest flying machines ever built.

Constructed in the early 1900s by Brazilian aviator and inventor Alberto Santos Dumont, the original "14-bis" was the first heavier-than-air plane to achieve independent flight — aka without being catapulted into midair, like the Wright Brother's plane. Dumont and the 14-bis took off from Paris, France, on Oct. 23, 1906 and flew around the Eiffel Tower to the amusement and wonder of the assembled crowd, and onlookers on the streets of the City of Light.

If you did a double-take as the replica of the 14-bis took off and soared throughout the arena, it might have been because the machine looked to be flying backwards — and it was, kind of. The 14-bis was designed with the motor and the standing cockpit at the rear of the plane, perpendicular to the aircraft's wings. Called a "canard-style" plane because of its bottom-heavy resemblance to a duck, the pioneering aircraft definitely made an impact on the crowd at the opening ceremonies. Not to mention, the model reignited the controversy over who really was first in flight — two bicycle repairmen in North Carolina or a Brazilian-born balloonist in France?

While the latter part of the plane's premiere performance was rendered using some clever CGI-animation, the real-life version of the plane boasted some pretty novel applied technology of its own. Ever the creative inventor, Dumont actually controlled the ailerons — otherwise known as the wing flaps on the trailing edge of the wing surface — on the plane using wires attached to the arms of his jacket. While that might seem more like a rudimentary mecha suit from an anime than a modern plane, the idea did work. (Well, for a short while, anyway!)

While the pioneering creator of the 14-bis might not be super well-known outside of his native Brazil, that all may change after the inclusion of his machine in the 2016 Rio opening ceremony, and as the games themselves get underway. For those traveling to other parts of Brazil to take in the rest of the games, they will be departing out of Rio's domestic airport, Aeroporto Santos Dumont, named after the inventor of the 14-bis himself.