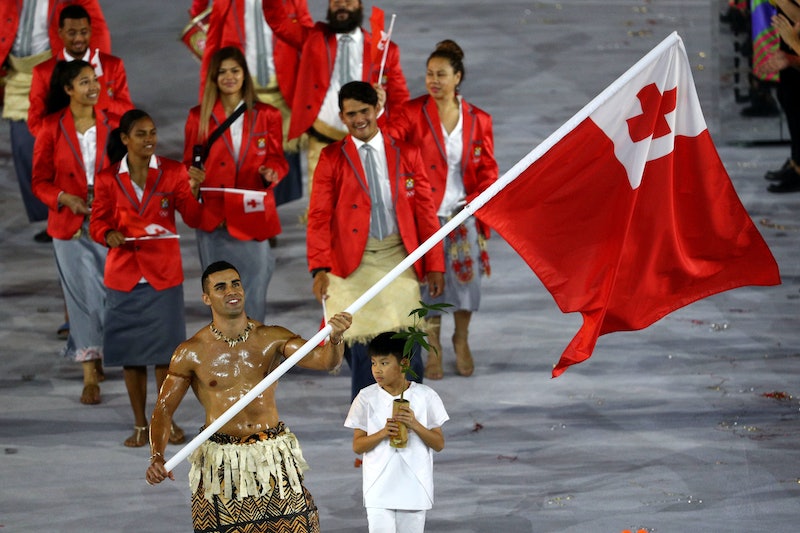 It's times like the Olympics opening ceremony when you realize just how big the world is and how many countries there really are. During the 2016 Rio Olympics opening ceremony on Friday night, the Parade of Nations was going along swimmingly with lots of countries marching and flags waving, including Michael Phelps proudly carrying the USA flag and leading in the team from the United States. And then the crowd went absolutely wild when the shirtless flag-bearer for Tonga entered the opening ceremony oiled up in a Polynesian outfit, carrying his country's flag, and making all of Maracanã Stadium collectively swoon at his buff bod. (Is it hot in here or is it just him?)

Everyone's new favorite oiled-up crush is Pita Nikolas Taufatofua , a competitor in Taekwondo, according to the Olympics' list of flag-bearers. Radio New Zealand reported that the 32-year old athlete is the first-ever to qualify for the Olympics in the sport from Tonga, a small island nation in the Pacific Ocean near Australia and Fiji. I think viewers will be booking their tickets there after see Taufatofua marching. Damn. But the shirtless wonder's road to the Olympics wasn't as easy as it looks. According to Generosity.com, the athlete raised about $6,000 USD in order to pay his way to Rio.

And boy is Twitter glad he was able to make it to Maracanã Stadium, with most declaring that Tonga has won the Olympics without even competing yet.

OK, but Tonga still needs to compete in order to win gold, because rules. So you can see Taufatofua compete in the Taekwondo competition happening starting on Aug. 17 through Aug. 20. Sure, that's a long time from now, but the images of his oiled-up entrance should keep you warm in the meantime.

Anyone else have a sudden urge to move across the world?

More like this
What Is Jeanie Buss' Net Worth? The Lakers President Is Uber Rich
By Hugh McIntyre
Jake Daniels Just Became The UK’s First Active Football Player To Come Out As Gay Since 1990
By Sam Ramsden
Rebekah Vardy & Coleen Rooney’s Trial Has Officially Begun
By Bustle UK
Twitter Was Saying The Same Thing About Sam Ryder’s Surprising Eurovision Result
By El Hunt
Get Even More From Bustle — Sign Up For The Newsletter