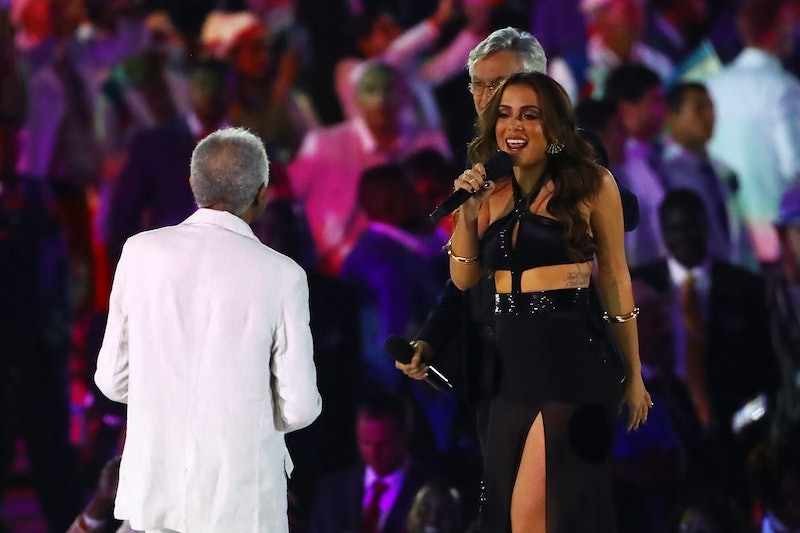 The 2016 Olympics opening ceremony in Rio de Janeiro has been highlighting many aspects and traditions of Brazilian culture — including Carnival. And the host country just happened to have a talented singer named Anitta on hand to sing the soundtrack to one of Brazil's cultural cornerstones. So who is Anitta from the Olympics opening ceremony? The 23-year-old singer is a Rio native and a popular recording artist in her native country, who describes herself as "Cantora e Compositora Workaholic" in her Twitter bio (that means "Singer and composer workaholic" in Portuguese).

Signed to Warner Music Group, Anitta's breakout single is called "Meiga e Abusada" from 2013 and it's a fun dance tune in Portuguese that channels Ariana Grande and old school Lady Gaga. Since then, she has released three studio albums, dominated Brazilian YouTube views with her cinematic music videos, and ventured into singing in English. According to Direct Lyrics, Anitta had released an English version of her new song "Bang" in June, but it was taken down from YouTube due to copyright issues. So the English-speaking world will have to wait, but Anitta has already conquered the Brazilian music scene with high-energy songs like "Essa Mina É Louca," "Bang" (the original version in Portuguese), and "Sim Ou Não," a song which boasts a popular music video that amassed 9 million YouTube views in six days, according to Billboard.

But performing at the Olympics in her home country is even more of an honor, Anitta told Billboard earlier this week. "I couldn't believe it when I found out I was invited," she said. "The whole world will be watching, and that's very important for me. I come from the ghetto in Brazil where we don't have a lot of career opportunities, so I'm sure my family and people who live there never imagined that one day I'd become a singer and be able to perform at an event like the Olympics."

Like Anitta said, the whole world was watching, and I think she made Brazil proud.