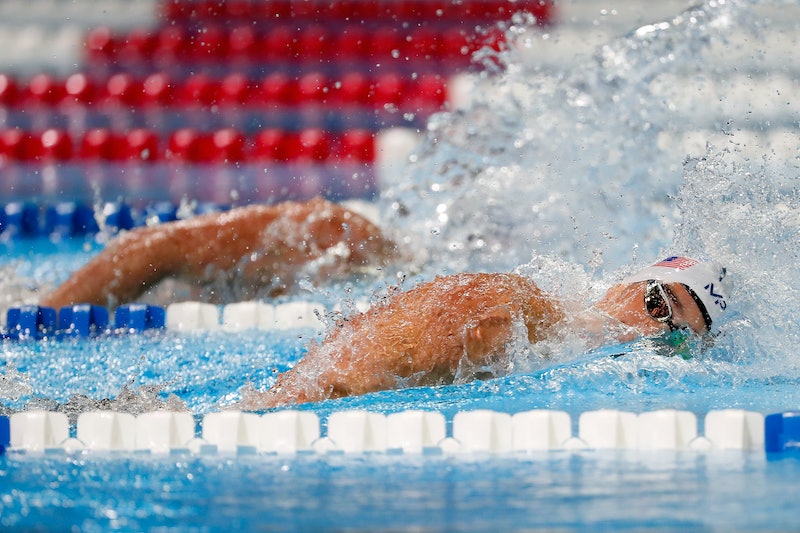 Ryan Lochte is one of America's greatest swimmers, and there's certainly enough proof of that — he's won 11 Olympic medals (five gold, three silver, three bronze) so far. Emphasis on the "so far," of course: with the summer Olympics Games starting in Rio today, I'd keep an eye on that medal total. His success is, in part, thanks to his own distinctive and streamlined way of starting a new lap, which pundits believe saves him a lot of time in the pool. Whether you're a swimmer or simply enthusiastic about watching the sport, it's well worth checking out these clips of Ryan Lochte's freestyle turn and flip in the water.

Yes, it's worth bearing in mind that Lochte's technique has created controversy in the past: FINA, the international body for aquatic sports, ruling in September 2015 that the "Ryan Lochte"-style turn and flip in the water would be illegal for all individual medley races. This is kind of sad, since Lochte only debuted the style in summer 2015 so he didn't get much chance to benefit from his method — but, of course, that doesn't make it any less amazing to watch. Also, one month later, FINA added an interpretation to the ruling that meant that Lochte's turn would be permitted during freestyle-only races. But, while the FINA may have a complicated ruling on the subject, mine's pretty simple: this technique looks jaw-dropping in action. Check it out:

The science is indisputable. But the aesthetics are even more so: this technique is dolphin-level fluid, right?

Compare and contrast. There's no competition, here. Sure, Lochte is quicker than the others even without the turn and flip, but look how much further ahead of the others he gets, thanks to the technique.

Because the turn and flip looks even prettier with a side helping of dolphin kick.

Never getting over those swim trunks.

Extra breathtaking when all that speed and fury is slowed all the way down.

The "In His Own Words" Clip

Note how he uses the turn only every other lap because it's so energy-draining. So sure, the turn may be advantageous, but only to some extent. Ultimately, since much of short distance swimming is pacing yourself with regards to your energy, it may be a case of a little going a long way: use just enough to outpace your competition in freestyle swimming races while not going to extremes and exhausting yourself into slowing all the way down before the finish line.

Who else is even more excited for the Olympics now?!