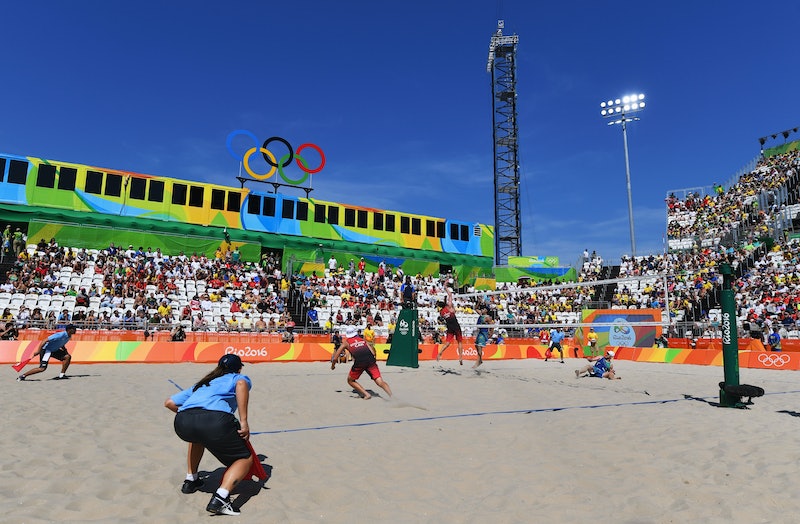 It's hard to argue with the sheer awesomeness of the Olympics: It's a sporting tradition which extends all the way back to Ancient Greece, and, since its inception, it has aimed to bring people of all nationalities together in friendly competition. Additionally, it also regularly brings capital and tourism to cities that need extra helpings for both. But this year, it will lack one key component: GIFs. On Friday, Aug. 5, the International Olympic Committee announced a ban on GIFs and Vines to protect the official rights holder, NBC. I guess the logic is, if viewers could watch the whole thing in GIF form on Twitter, then why watch the actual event on television? Anyway, no sweat because the Internet is nothing if not mad creative and the obvious result is in: namely, the #OlympicProblemsIn5Words hashtag.

The hashtag is almost standing for a tiny but mighty revolution against the ruling, because it's giving livetime updates on the Olympics in comic form, and isn't that pretty much what a GIF is? Also, a good deal of the tweets ended up flipping the bird at the ruling by using GIFs anyway. Just, you know, not ones of the actual Olympics event. But that's fine. The tweets have exposed everything we needed to know, video or not. The #OlympicProblemsIn5Words tweets below emphasize exactly why we need an Internet presence at the Games.

Because Tweets Expose What We Always Suspected

Because The Internet Isn't Afraid To Say What We're All Thinking

Who knew this year's opening ceremony would require a few vats of massage oil?

The Michael Paine of it all.

Because LBR, The Sheer Breadth Of Opportunity For Wordplay At The Olympics Is Pun-ishing

Because Unlike Mainstream Coverage, It Celebrates The Olympics' Unsung Heroes

Because we're not all athletes, but we're all winners...kind of.

So if you're at home browsing the Olympics events, don't get bummed out by the lack of GIFs, get involved. You may not win a gold medal for athleticism, but with this hashtag getting bigger by the minute, you could find yourself on the world stage for all the right reasons.