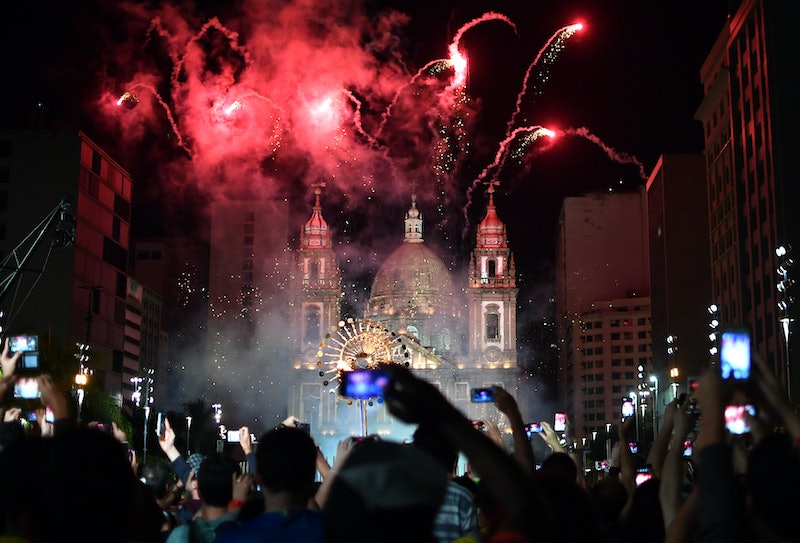 It's easy to forget just how much physical room the 2016 Summer Olympics can occupy until you get a different perspective — and thanks to Reuters, that's just what we got. The news photography agency recently released, via their Twitter account, some truly amazing aerial shots of different Olympic venues throughout Rio. What's most striking about the photos is the sheer size of the Olympic venues in comparison with surrounding buildings. In a city that is approximately 485 square miles with a staggering residential population of more than 6 million people, Rio is a city that defines what it means to economize space. For the city of Rio to somehow have found the actual space to fit in new structures and re-purpose older spaces for the Summer Games is truly a testament to the city's dedication to Olympic glory.

The most striking photo, in my opinion, depicts the Olympic tennis courts. The courts are sandwiched in between what appears to be a parking lot and a highway. Other venus find themselves in the most unlikely of places, including near hotels, housing developments and nestled snugly on the beach. While Rio has been called a "perfect storm" in regards to the difficulties with getting the city ready and various venues and structures ready for the Olympics, it would appear from these photos (along with last night's opening ceremony) that not only did the city finish on time but they were able to find enough spaces.

Even though we are still in the early days of the Olympics and have yet to truly see how Rio handles the Olympics festivities, these photos are another reminder of just how global an event this is. Gaining another perspective into the Olympics, like the one Reuters has provided, is necessary for us to understand the various impacts the Olympics can have on us.

I find the photos a positive and incredible reminder of what is going on in Rio. If I can't be there, I'm happy that the magic of social media is giving me a front row — and aerial — seat into the summer games.