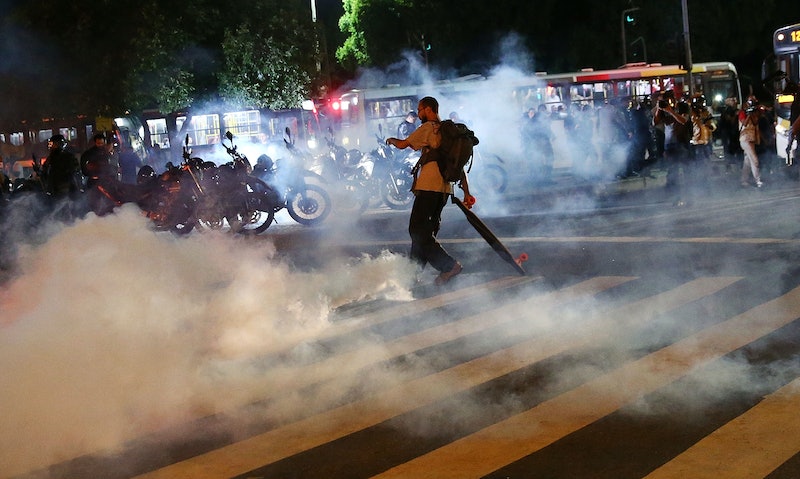 The 2016 Summer Olympics in Rio de Janeiro, Brazil are finally here, bringing together hundreds of athletes from countries all over the world for the biggest, most elite competition there is. And yet, the worlds of sports and politics often clash, mix, and intermingle ― at the same time as the world was getting ready to watch the opening ceremony on Friday night, chaos was playing out in the streets of the city. As the Washington Post detailed, Rio police were firing teargas at protesters in the streets outside and around Maracana Stadium on Friday night, trying to suppress demonstrations against both the Brazilian government, and the presence and impact of the Olympic games themselves.

Brazil has seen protest erupt during a high-profile sports tournament before, and it wasn't that long ago ― during the 2014 World Cup, many in Rio were similarly incensed over the opulence and expense of the massive international soccer tournament, despite persisting and harrowing poverty. The criticisms were perhaps best summed up by an instantly iconic piece of street art by Paulo Ito, showing an emaciated, crying child with a soccer ball on his plate.

Suffice to say, countless residents of Rio aren't feeling all the pageantry, and would like some awareness to be turned to addressing their suffering and oppression instead. As a prime example, some residents of Rio's favelas actually had their homes destroyed in order to clear room for the summer games.

In the protests that are happening now, there's an additional political layer that's helping to drive the demonstrations. In June, then-Brazilian president Dilma Rousseff was impeached and ousted, in a series of events that have been characterized by some as a coup.

As such, these current protests are giving voice both to economic and human rights grievances contrasted starkly against the Olympics, and distrust and outrage towards President Michel Temer. The country's vice president since 2010 before ascending to the top job following Rousseff's removal, Temer has faced corruption allegations, reportedly bucked tradition on Friday night and was not introduced during the opening ceremony, so to avoid being booed.

In short, while the international athletic competition may be dramatic and pulse-pounding over the next few weeks, it's crucial to remember that they've come at a terribly high cost for so many people, costs nobody should have to pay for a city to host an event. For so many of the people who actually live in Rio, day in and day out, all the celebration and spectacle seems tone-deaf at best, inflammatory and destructive at worst.