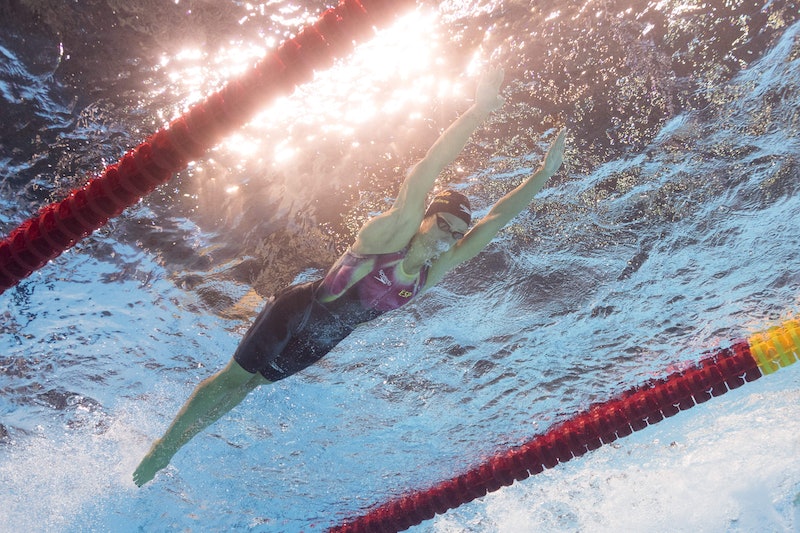 In July 2009, the swimming world was left stunned when athletes competing at the World Swimming Championships in Rome began breaking dozens of world and championship records left and right. Something was amiss. But it wasn't doping that officials from swimming's international governing body were concerned about, it was the suits. Fearing they gave swimmers a disproportionate advantage, full-body polyurethane swimsuits have since been banned from international competitions like the Olympics. That being said, swimmers seem to still prefer suits with more coverage. What's behind Olympic swimmers' obsession with long swimsuits?

Full-body polyurethane swimsuits hit the world of competitive swimming with a bang. The innovative technology (Speedo developed their suits with NASA's help) behind the suit's foam-like material helps to repel water and make the swimmer more buoyant due to the fabric being comprised with tiny pockets of gas. Overall, the suit has the potential to reduce drag by 8 percent, a whopping advantage in a sport where races are won by tenths of a second. A ban on the suits was proposed by the United States and passed in a vote that saw 180 nations back the proposal.

"It's not that we are opposed to science, but we want the performance of the athletes to be gauged on their hard work, on what they're able to accomplish without technological aids, specifically swimsuits," Chuck Wielgus, executive director of USA Swimming, told the Associated Press.

Suits can now only be made from textile fabrics and may not contain zippers. Male swimmers are restricted from wearing suits that cover their upper body or extend past the top of the knees, while women's suits must end around the mid-thigh and keep the arms and shoulders bare.

In a sport where athletes will shave off every inch of body hair in an effort to reduce the amount of drag on their bodies, long suits are preferred not because athletes are feeling modest, but because they're thought to boost a swimmer's speed and mobility in the water. A suit that extends below the hip helps to streamline the swimmer's body by creating a sleek silhouette and thus minimizing resistance encountered as the swimmer pulls themselves through the water. Suit manufacturers are also turning to elastic bands to help athletes contour and streamline their bodies for better propulsion.

It's integral to have the right equipment when you compete at the Olympic level. For runners, that means shoes with solid support and innovative flexible soles; for cyclists, it means reliable tires and aerodynamic helmets; and for swimmers, it means sleek caps and streamlined suits to reduce drag because every second counts when it comes down to chasing Olympic gold.

More like this
The Best Memes & Tweets From The 2022 Met Gala
By Olivia Rose Ferreiro
23 Abortion Funds In States With Trigger Bans To Donate To
By Emma Carey
What Is Jeanie Buss' Net Worth? The Lakers President Is Uber Rich
By Hugh McIntyre
The 10 Best Waterproof Watches For Swimming
By Lauren Moison
Get Even More From Bustle — Sign Up For The Newsletter