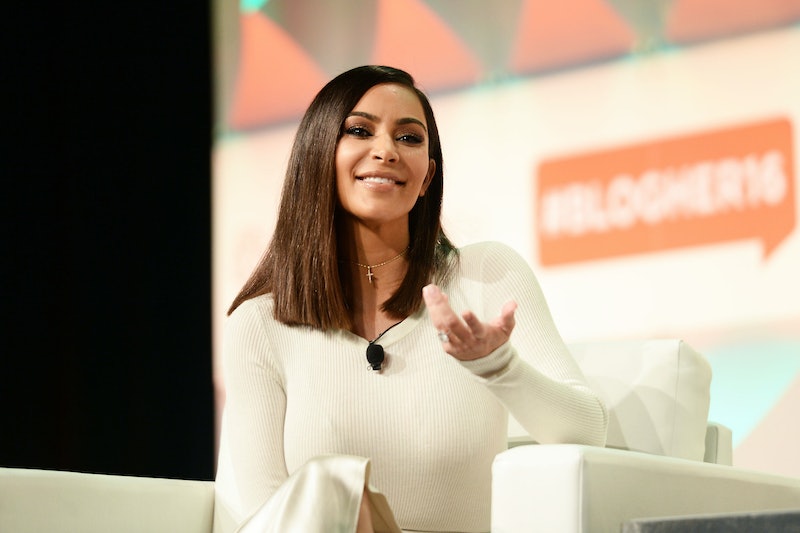 Leave it to Kim Kardashian and Kanye West to produce two of the cutest children in existence. Yet while photos of the couple's adorable three-year-old daughter North have become fairly commonplace, fans have gotten far fewer sights of the equally sweet eight-month-old Saint. Save for a few released photos and public appearances, the famous infant has largely stayed out of the spotlight, which makes perfect sense given the fact that he is, you know, an infant. Yet on Saturday, Kardashian blessed us all with an absolutely adorable video of Saint West giggling that'll have everyone freaking out over the ridiculously cute child.

In the Instagram video, Saint is seen smiling and laughing every time Kardashian gently tickles him with a stuffed animal. It's a short clip, but the sound of the baby's giggles (not to mention the look of his adorable white onesie) is too cute to handle. No wonder Kardashian captioned the video with three very fitting emojis — a baby, a face with heart eyes, and, of course, an angel.

It's so sweet to see Kardashian's bond with her son. Although photos and videos of Saint have generally been rare, they've become slightly more frequent in recent weeks, with Kardashian posting a hilariously cute video of Saint as a "bee" (i.e. using the Snapchat filter) in late July. Saint also showed up briefly in an episode of Keeping Up With the Kardashians, appearing on the family's trip to Cuba alongside his big sister North.

Kardashian and West have spoken out about the love they have for their youngest child, with the KUWTK star telling E! News in July that Saint is totally a "daddy's boy." And at the BlogHer conference on Aug. 5, Kardashian explained that she's wary to share many photos of Saint because she's so "protective" of him, saying, "I wasn't posting about my son because I want him to go to the park like every normal human being."

That's a completely reasonable explanation, and it's good to see Kardashian and West being so vigilant about their children's privacy. Yet fans, of course, are thrilled every time they do decide to share photos and videos of their kids, like that adorable, sweet Saint giggling clip above.