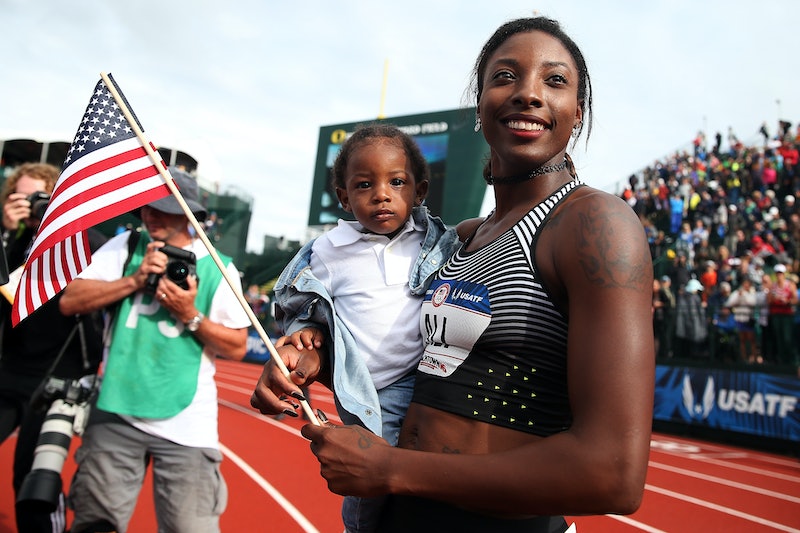 Balancing family with demanding careers is a constant struggle for many women, but you need look no further than the U.S. Olympic team for proof that you can excel at both. How many Olympians are mothers on Team USA? There are several moms who are currently competing for gold in a variety of sports at this year's games in Rio. Between their world-class athletic talents and their family life, these Olympian moms prove you really can have it all.

According to TeamUSA.org, there are currently 10 mothers on the U.S. Olympic team, competing in a vast range of sports — from track and field to swimming to shooting. Though these women may range widely in their ages, respective sports, and Olympian history, there's one thing they all have in common: they're all going for gold, and they're doing it with the support of their kids and other loved ones at home.

Among these amazing Olympian mothers on Team USA? Nia Ali, who is competing at the Olympics for the first time this year in the 100-meter hurdles event. She has a one-year-old son named Titus, whose dad — to make her whole story even incredible — is also an Olympian track and fielder. Talk about amazing genes!

Ali's not the only highly accomplished mom to compete for the U.S. at the 2016 Olympics. Cycling star Kristin Armstrong will make her fourth Olympics appearance this year. When she last competed (and won the gold!) in London, she brought her son Lucas to pose on the podium with her, as captured above.

Also included in the group of skilled moms on Team USA: Rugby player Kelly Griffin, who shares two children, Quinn and Connor, with wife Ashley; Kim Rhodes, who gave birth to son Carter in 2013 and is now the first American to qualify for the Olympics in shooting on five different continents; and swimmer Dana Vollmer, a four-time gold medalist who was inspired to return to the sport after giving birth to son Arlen last year.

All these stereotype-shattering women, along with all of the other mothers currently competing at this year's games, are true inspirations — not just for moms and athletes, but for people everywhere. Get to know more about some of them here, and enjoy the Olympics, everybody!