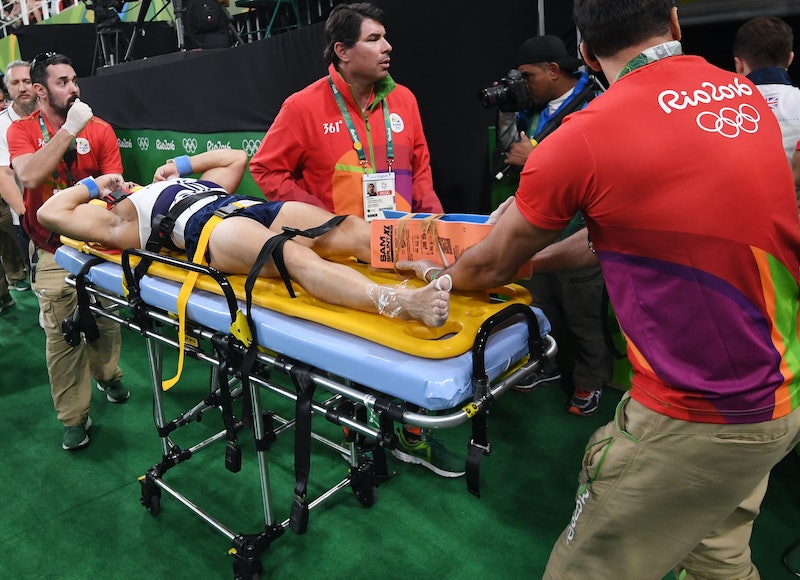 A day after breaking his leg on the vault during the men's Olympic qualifiers, French gymnast Samir Ait Said is already thinking about getting back into competition. Said had people around the world seriously concerned (and perhaps a little queasy) Friday when his shin bone protruded from his leg in an unnatural shape under the skin following his vault landing during the first day of the men's gymnastic competition in Rio. Although Said gave the crowd a spirited wave as he was strapped into a stretcher and wheeled off the floor of the gymnastics arena, many wondered if he'd be OK.

Footage of Said's gruesome fall is more than a little disturbing for anyone with a basic appreciation of their own lower appendages. If the look of complete agony on Said's face as he lands or the unnatural look of his broken leg fail to horrify you, the sound of his shin bone snapping surely will. However scarred and horrified we may be as spectators, Said seems undeterred by his injury. Like a true champion, the 26-year-old French gymnast is already planning to not only return to the Rio Olympic Arena to cheer on his teammates but to also train for the 2020 Games in Tokyo.

"All in all, everything went well. I'm happy," Said said in a video posted to his Facebook page early Sunday, updating fans on his status after undergoing surgery to repair his fractured tibia the night before. "Actually, I still can return to the venue to cheer on my friends because the competition isn't over. I still put myself in the ambiance with the blue, white and red cast. Allez la France!"

Although Said's 2016 Olympic dreams were been cut short Friday, the gymnast is already looking ahead to the 2020 Games. "Believe me, the Tokyo 2020 adventure is still alive and as soon as I'm recovered, believe me, we'll go back to training and we'll go after those Olympics," he said. Rio was Said's first Olympic competition.

Speaking from a hospital bed, Said appeared to be in good spirits as he showed off his tricolored cast — inspired by the French flag of course — and thanked those who sent messages of support via social media. "They really warmed my heart," he said. "They did me some good, they raised my morale."

It's unclear exactly when Said will be released from the hospital and allowed to return to the gymnastics arena as a spectator, let alone given the all-clear to resume training. The road to Tokyo, should Said decide to take it, will likely be a rough one for the injured Frenchman. Said will likely have to undergo about four to six months of rest and physical therapy before he's healed up enough to return to the vault.