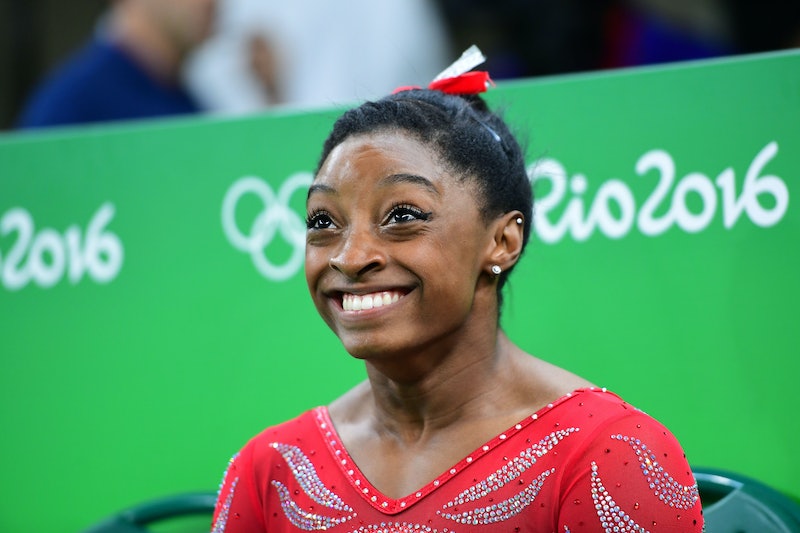 Simone Biles is the US superstar of the 2016 Rio Olympics, and many gymnastics fans are curious about the 19-year-old's personal life. The Olympian has certainly had a very social time in Rio so far, having received a good luck message from Kim Kardashian West, posed for a hilarious picture with Michael Phelps, and had a ton of fun on Snapchat. But it doesn't seem likely that Simone Biles is dating anyone, unless you think that a few of her recent posts are not as jokey as they seem to be intended.

A couple of Biles' recent snaps with a fellow Olympian suggest more than camaraderie, but it could all just be a fun inside joke. Recently, Biles and Brazilian gymnast Arthur Mariano have been getting pretty affectionate on social media, with the Fierce Five member posting a picture with Mariano captioned, "my Brazilian boyfriend." The duo have also posted multiple Snapchats calling each other "babe." That definitely raises some eyebrows about their relationship, but it seems that the over-the-top nature of these posts appears to be more in jest than hinting at a real relationship, and it seems likely that Biles is currently single.

The gymnast has plenty to worry about without romance on the table. She's considered the gymnast to beat at the Rio Olympics, and she recently appeared on the cover of Time. She's a three-time world all-around champion in gymnastics, with a record-breaking 10 World Championship gold medals to her name. She's appearing in the qualifiers on Sunday, Aug. 7, if you want to tune in and see her in action for yourself.

As for her life off the mat, Biles was born in Ohio in 1997, and she was adopted and raised by her grandparents. She began taking gymnastics as a 6-year-old, and was homeschooled for most of high school to focus on the sport. In 2014, she posted on Twitter that she had chosen to attend UCLA. According to her NBC Olympics bio, Biles had planned to compete in college gymnastics at UCLA, but decided to turn pro instead.

An active social media user, Biles has addressed rumors about her love life, often in a funny way. In 2015, she shut down the speculation that she was romantically involved with fellow gymnast Alec Yoder with a tweet describing them as best friends, not dating.

She's also frequently described her lack of relationships on Twitter with self-deprecating posts about loving "cold weather bc i can wear my boyfriends clothes...oh wait what boyfriend" and answering people asking "'whos your boyfriend'" with "I laugh then sadly say 'I don't have one.'" Clearly, Biles isn't giving her relationship status too much weight, which makes total sense considering how many other things on her plate right now — such as winning gold at Rio.