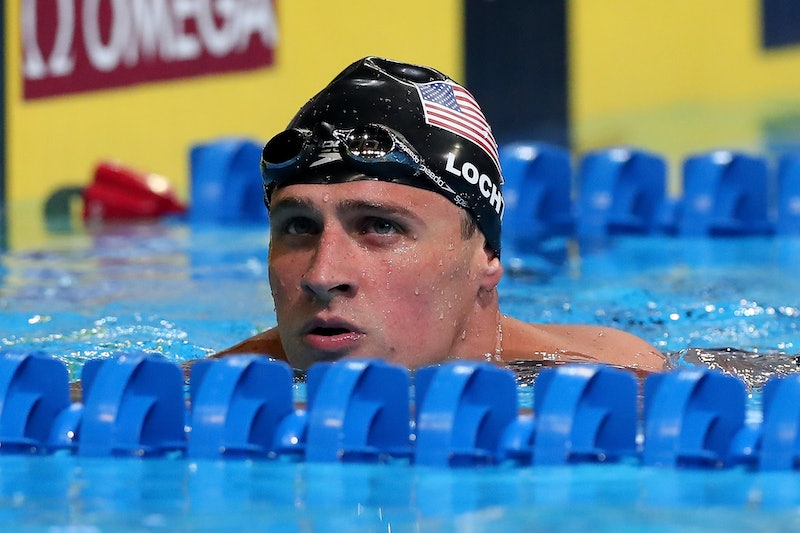 Come on and get happy y'all, because one major champion swimmer is back on the market. That's right, it appears that 11-time Olympic gold medalist and all-around goofy guy Ryan Lochte is single and decidedly ready to mingle. In a July interview with Cosmopolitan, Lochte revealed that he's looking for love, signing up for dating apps and talking to several women as he gets ready for his Rio events. Don't worry, it's normal if you just gasped a little bit and had to fan yourself so you wouldn't faint from the realization that Lochte is single and could possibly swipe you on Tinder, because same. Then again, his ex (but potentially current?) girlfriend, Kayla Rae Reid, has posted photos from Rio, so it's unclear if she and Lochte are actually back together.

According to the Cosmo interview, the 32-year-old athlete has been spending the last four years since the London Olympic games training, eating, and Tindering — the stars, they really are just like us. Said Lochte about the dating app, "So I got on it and I've been matching up with a bunch of gorgeous women who are smart, they have professional jobs and everything. I'm like, 'Wow, this is perfect.'"

Lochte revealed that he also tried to get into other dating apps like Bumble and Raya, but to no success. With Bumble, "the girl always has to make the first [move], and I don't really like that. I don't think that's a woman job," he said, and as for Raya (an app meant for celebrities and creatives) location made things complicated. Said Lochte, "I'm living in Charlotte so that didn't really work because most of the women you link up with are either in L.A. or New York."

The last mention of Lochte being linked in a relationship was only a few months ago in May 2016, when a bunch of PDA-heavy images started showing up on the swimmer's Instagram featuring model Reid. And even though Reid was shown to have met Lochte's mom, the relationship apparently didn't last if he's now talking Tinder with Cosmo. Yet it's unclear if that's definitely the case, as Reid has posted several Instagram photos from Rio, making it seem like she's there to support Lochte during his events.

In 2013, fans got a very up-close view of Lochte's love life, in his reality show about finding romance, What Would Ryan Lochte Do?, which somehow got canceled after only one season. In one of the episodes, audiences saw Lochte's girlfriend of four years, Jaimee Hollier, breaking it off with the swimmer over phone call. Oof.

It's unclear if Lochte has found his happily ever after considering those Reid photos, but if he hasn't, maybe the dating apps will work out for him. If you are in Rio right now, and you happen upon a guy who looks like Lochte while using Tinder — it might actually be him, so be sure to swipe right.