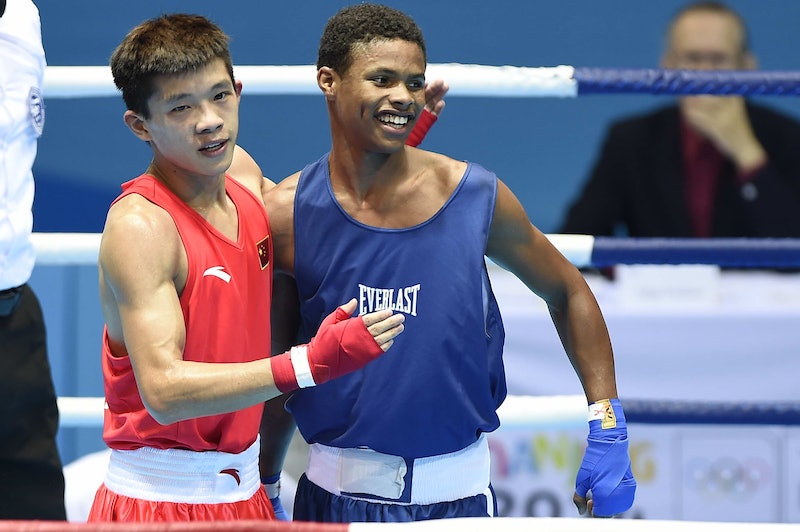 Fellow Olympian fanatics, particularly those of the boxing variety, know that if you've seen the Powerade commercial featuring US Olympian boxer Shakur Stevenson, you probably are not just inspired by him, but also curious to know more about his life — especially considering how the commercial delves into his backstory through reenacted "flashbacks" to his childhood. The ad highlights Stevenson's perseverance and tenacity in the face of adversity, but also the influence his family, particularly his mother, has had on his Olympian quality discipline and fortitude. Shakur Stevenson's mother, Malikah Stevenson has inspired him to reach his Olympic goals in truly incredible ways.

Stevenson seems to be a family-oriented teen and his loved ones are always on the forefront of his mind, as evidenced by his many interviews. But it's his sweet and poignant relationship with his mother that really shines through, though his unfaltering connection to his grandfather is something to marvel at as well. I've found, through various anecdotes, that Stevenson and his mother are not only alike, but the cause of each other's success. As NBC puts it, the athlete's "motivation" is "to provide his mother and his siblings – all eight of them – with a better life."

Here are just a few ways Stevenson's mother has influenced his life:

She Named Him After Her Favorite Rapper

Stevenson's name derives from the late great rapper, Tupac Shakur. The boxer explained to Complex in this video that his mother loved the musician, and to USA Today that she was an acquaintance of his. And so she wanted him to carry on the legacy with the name Shakur.

She Encouraged His Responsibility

Stevenson explains to Complex that his mother worked diligently to support him and his siblings, and thus as the oldest child of nine kids, he had to learn to step up to the plate.

She'd Do Anything For Her "Baby"

As per NJ.com, Stevenson's mother is terrified of planes, as am I. So when I say I admire her for her willingness to be there for her son even if it entails being suspended for an extended period of time at 30,000 plus feet, I truly do. She told NJ.com this about flying to the Olympics to see Stevenson compete: "My baby wants me to go, so I said I'll go. I'm still scared, but I'll go." When the article was published in June, there was a GoFundMe page set up in order to ensure that she, Stevenson's grandfather, and his brother could, in fact, attend.

In a YouTube video entitled "A Day in the Life of Shakur Stevenson: An Olympian Returns Home," from USA Boxing, the boxer's mother explains that, "his ambition and hard work are taken from me... I've been working all my life and I work hard, so I think Shakur is probably one of my children who's most like me." In that same video, Stevenson's grandmother and great aunt say that, "he loves his mother to death." Which is, you know, just about the cutest thing I've ever heard in reference to a rough and tough Olympian boxer.

She Let Him Decide His Own Path

Stevenson's mom explained in the "A Day in the Life" video, that she thinks, "He realized before everybody else that he really had a passion for [boxing]. But then, when he just started walking around, shadow boxing to himself, I said, 'Oh yeah, this is what you want to do." It's a sentiment his grandmother echoed when she explained that Stevenson carried on his tiresome boxing training even without his grandfather's insistence.

It's clear that Stevenson and his mother have achieved this impressive and honorable goal, together.

More like this
Marcus Rashford Took Inspo From Kravis For His Adorable Proposal To Girlfriend Lucia Loi
By Frances Stewart
Ryan Reynolds Brought Some Famous Friends To Wrexham A.F.C's Last Game Of The Season
By El Hunt
Remember These Ancient Pieces Of '90s Tech?
By Lucia Peters and Emma Carey
11 Trends From The ‘90s That Made You Feel So Cool
By Julie Sprankles
Get Even More From Bustle — Sign Up For The Newsletter