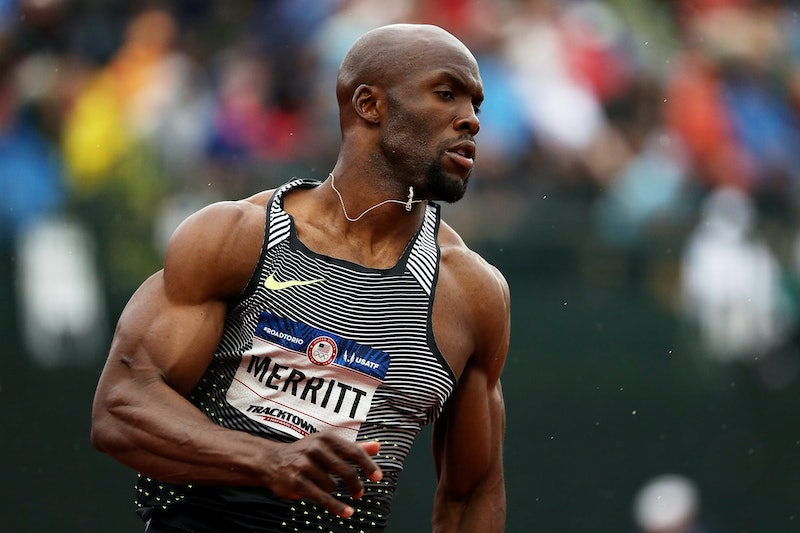 While watching Team USA Olympian LaShawn Merritt speed his way around the track at the 2016 Summer Olympics in Rio De Janeiro, one might find themselves getting curious about the Virginian athlete — specifically, needing to know if LaShawn Merritt is single (hey, you're not alone). As Merritt runs the 200m, 400m, and 4x400m relay throughout the Games, fans everywhere will be tuning in and dying to know more about the impressive athlete and, yes, the status of his dating life.

Well, it turns out that the Olympian, who is 6'2" and 30 years old, hasn't spoken publicly about any relationships in awhile — but he probably doesn't have a whole lot of time to be thinking about romance, anyway. They don't call them champions for no reason, and training for the Olympics takes a great deal of time, effort and energy. People reports that at a media summit at the end of July in Los Angeles, Merritt announced that he was training 24 hours a day for Rio, saying, "Training isn't just physical out on the track. I'm on the track maybe two hours, I'm in the gym maybe an hour and a half, but mentally, I'm always locked in. It's all day."

After Merritt won two gold medals at the 2008 Summer Olympics, he was expected to excel again four years later in London, but according to Yahoo News, a hamstring injury forced him out of the track and field events. It's pretty clear the athlete is trying to make a comeback in a big way at the 2016 Rio games. People reports he's been working with trainer Brooks Johnson, who Merritt says is "really passionate about the sport," in order to break a world record.

In the same People article, Merritt made it sound like he doesn't feel like he needs a relationship right now. He called his family a "big support system" who "keeps me humble," and between hanging out with his fam and his coach, the athlete probably doesn't have any energy left over to give to a significant other. He was last reported as being in a relationship in 2010, and since then, it seems that he's staying focused on his many impressive athletic achievements.

More like this
Love Of Huns' Definitive Guide To A Seminal BRIT Awards Moment
By El Hunt
Jake Daniels Just Became The UK’s First Active Football Player To Come Out As Gay Since 1990
By Sam Ramsden
What Is Jeanie Buss' Net Worth? The Lakers President Is Uber Rich
By Hugh McIntyre
Doja Cat Needed Tonsil Surgery & Now She Can't Eat Taco Bell's Mexican Pizza
By Jake Viswanath
Get Even More From Bustle — Sign Up For The Newsletter