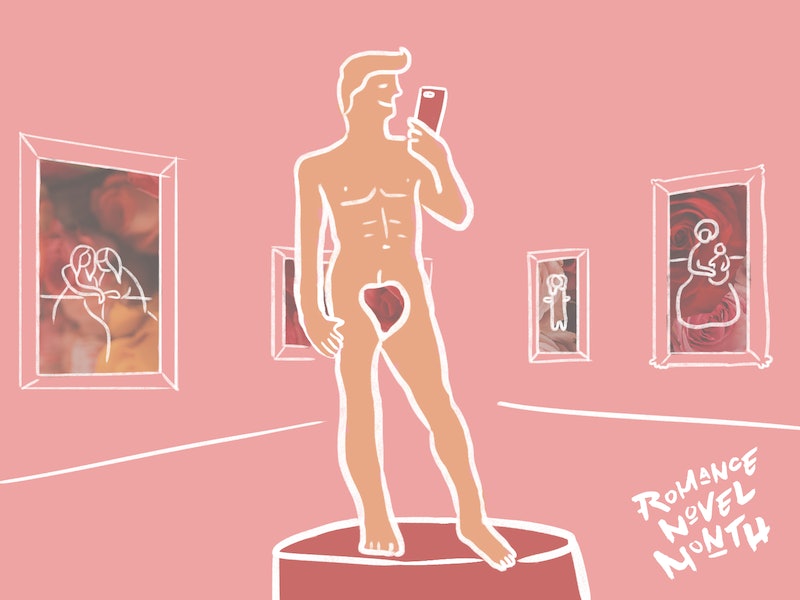 I've been single for a long time, and it sometimes feel like I've done it all: Tinder, OKCupid, Coffee Meets Bagel. I even tried literary speed dating once. I'm always willing to try something new, so when I had the opportunity to try quotes from romance novels on Tinder as part of Bustle's Romance Novel Month, I jumped on it. But almost as soon as I had claimed it, anxiety took over, and I began to chicken out. I avoided the project for weeks.

Here's a little bit of background about me: I'm a big wimp when it comes to dating. I can't flirt to save my life. I don't know how to send signals or read them, and I default to friendship instead of romance 99% of the time. Oh, and I overanalyze everything. Even when I like someone — like, really like someone — I usually never do anything about it. For some reason, a part of me is still stuck in the middle school thinking of "If he knows I like him, and he doesn't like me back, the world is over." My past is peppered with crushes I never had the courage to speak to. I know. It's stupid. I want to be better. Hell, I want to get laid!

But, romance novels have a long history of allowing women to express their sexuality, especially in times when women did not have the control of their sex lives as women to do today. Bodice-ripping is a trope for a reason! I certainly could learn a thing or two from these books.

Finally, after weeks of procrastinating, I poured myself a glass of wine, demanded that my roommate and her boyfriend sit with me (for moral support), and began swiping. Here are a few things I discovered:

1. The language in romance novels is incredibly forward.

It won't surprise anyone who knows me that the first thing I did was create a document of romance novel quotes, mostly pulled from Goodreads. Every time I sent one out, I would highlight it in yellow. It became immediately clear that most of Goodreads' top romance quotes would not fit well in a Tinder message — a lot of the lines were part of back-and-forth between two characters, and wouldn't really when presented without the full context of the scene. So, it actually took a long time to curate a list of contenders.

What I had left was a list of quotes that no sane person would text or say to a stranger. But I was not a sane person. I was a writer on a mission, and I plowed forward.

Here are some of the lines I used:

After an hour of me sending these lines, someone finally responded. I screamed, scaring the crap out of my roommate and her boyfriend. I had sent him the line from Nora Roberts: "It's hard to resist a bad boy who's a good man."

In response, he had written: "Hahaha what brings you to that conclusion?" Which meant I needed to send a new response, this time without Nora Roberts to guide me.

"What do I do?" I shouted at my roommate, waving my phone wildly.

"What is your goal?" her boyfriend asked me. I honestly had no answer. Was I trying to hook-up? Sext? Find Mr. Right? Just play with people? I had not thought this through.

So, I responded with a single word: "Experience."

Ha, what a lie. And of course, it didn't really work:

3. People aren't stupid, they know when they're being fed a line.

Most of the messages I sent did not get a response. Which, I get. I mean, I don't usually respond to crazy messages on online dating. But there was this funny one:

To be fair, he has a point.

4. But sometimes a compliment and some honesty can get things started.

Right before I sat down to do the actual writing of this article, I decided to send out one last try. At this point, I hadn't felt anything close to a love connection. I scrolled through my recent matches, picked a cute fella, and sent off a message: "I stop breathing when you smile." That's it, I thought to myself. You gave it your all, now sit down and write.

And then, miraculously, he messaged back. Instead of freaking out and trying too hard, like I did with my first reply, I decided to just be real, and tell him what I was up to. And somehow, it worked. As I write this, we're still chatting.

Maybe that's the real lesson here: that it pays to be genuine. Is that the secret?

Since sending out these romance novel lines, I've been Tinder-ing on my own. After sending out such bold declarations of love, it's so much easier to reach out to matches. I've felt far less pressure to be perfect. After all, what could be worse than pledging my undying love to a complete stranger? Even just saying, "Hi" is better than saying nothing at all.

So who knows, maybe that last guy and I will go on a date. Maybe we'll hit it off. Or maybe I'll take my newfound online dating confidence and connect with someone new. But in either case, this experiment has shown me just how potent the power of romance novels can be.