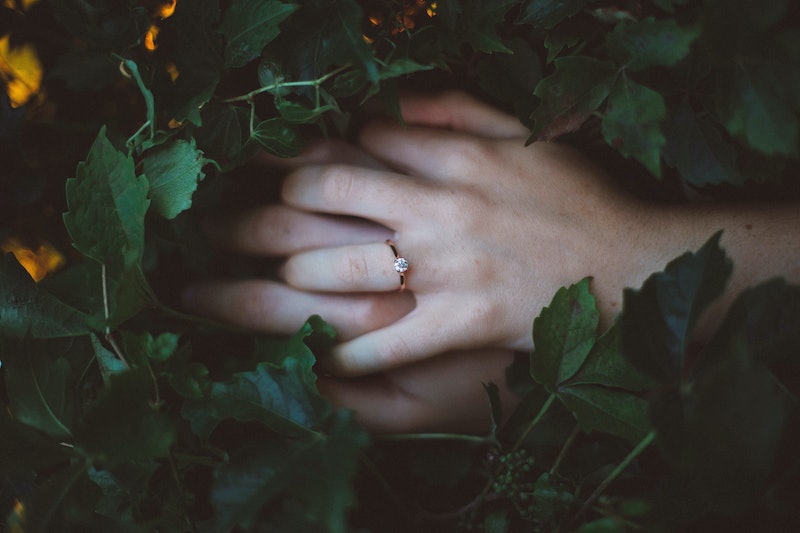 For every kind of reader there is, in fact, a romance novel out there for them. For lit lovers, there is contemporary romance, for sci-fi junkies, there are sexy paranormal romances, and, if your taste is on the side of thrillers and suspense, there are plenty of romance novels to read if you love mysteries. In the book world, you really can have it all.

All romance novels have two things in common — a love story at the book's center, and a happy ending — but that doesn't mean every book is the same. Within the romance genre, there's a vast world of stories from historical fiction to science fiction, erotica to Christian romance, and so much more. Just because steamy space sex and Victorian love stories aren't your thing doesn't mean romance books aren't your thing, either. If you prefer your sappy love stories with a side of intriguing mysteries , your second chance romances with fast-paced, page turning thrills, and your historical fiction with a bit of nail-biting suspense to historical fiction, there's an entire romance genre just waiting for you: romantic suspense.

Romantic suspense has everything you know and love about both genres: a heart-thumping love story, an intriguing plot, and incredible, ass-kicking female characters you love rooting for, both in their relationships and in their mystery solving. Can't wait to give one a try? Good, because here is a round up of nine romance novels to read if you love mysteries, thrillers, and suspense.

Everyone has dreamed about their own Mr. Perfect — but no one ever imagined it would get this dangerous. When Jaine and her girlfriends make a checklist about what makes up the ideal man, they don't expect it to move beyond their group. But suddenly everyone is talking about the tongue-in-cheek checklist — their co-workers, local newspapers, TV anchors, everyone. Suddenly, their harmless joke has turned... violent. And one of the list's writers has lost her life. Now Janie must solve the murder before the deadly stalker claims another life. Luckily for her, undercover cop Sam Donovan — her sexy neighbor — is there to lend a helping hand. Will it be enough to save her life? Find out for yourself in this edge-of-your-seat romantic suspense perfect for any true mystery lover.

When Chris finds Gianna and her 16-year-old daughter hiding from the burned wreckage of their vacation house, he doesn't let the ghosts of his past paralyze him into inaction — instead, he is determined to keep them safe and protected. When a blizzard forces the strangers to seek shelter together in Chris's cabin, Gianna finds that she and her knight-in-shining-armor may have more in common than she thought, including dark secrets that could get them all killed. Fortunately, that doesn't seem to get in the way of their instant connection. But there's still a threat lingering out there in the snow, and before Chris and Gianna can get their happy ending, they have to find a way to stay alive.

3. Under the Wire by HelenKay Dimon

In the fourth installment of HelenKay Dimon's Bad Boys Undercover series, things are getting hotter and even more dangerous than ever before. Reid, a Bad Boy of the Alliance, a secret military security agency, just wants to relax on his well-deserved vacation, but when he gets news that his former fiancé Cara has gone missing on a science expedition, he trades in his sunscreen for his gun and heads out to find his old flame. The danger and fear of a murder lurking in the darkness isn't even enough to cool the reignited spark between the pair of former lovers, and Reid finds himself wondering how he will be able to choose between the woman he loves and his job — a decision he's already made once before. A hot and steamy romance with plenty of action and intrigue to keep mystery readers entertained, Under the Wire will have you sweating for more than one reason.

4. The Shark by Mary Burton

There's nothing like a grisly murder to reignite sparks between two old flames, or so seems to be the case with Virginia state trooper Riley Tatum and former FBI agent Clay Bowman. The once-couple must reunite to solve the murder of a little girl — but all the clues seem to indicate that the murderer is a serial killer. And both Riley and Clay have experience with this dangerous villain. Can these two former lovers put their feelings aside and finally catch the killer who has been tormenting both of their lives, or will Riley be the next victim? The Shark will have you on the edge of your seat, waiting to find out.

When Laney Knox agreed to help the Austin PD investigate the recent murder of a young girl, she isn't quite sure about their choice of partner: detective Reed Novak. One thing is immediately certain, however: these two complete opposites are attracted to each other. But the deeper Laney and Reed dig into the crime, the more obvious it becomes that Laney may be more than just the cyber investigator on the case — she was also an attempted victim of the killer and even a potential future target. Can the pair put their individual expertise to good use to protect one another, or is their love as doomed as the next murder victim? With witty banter and plenty of hot, sexual tension, this pair will have you rapidly turning the pages to find out.

Kieran just wanted to keep her youngest brother out of trouble when she decided to "unsteal" the precious gem he took from a jewelry store in New York's diamond district. But when she returns to the scene of the crime, she finds herself in the middle of another heist along with FBI agent Craig Frasier. By sheer coincidence, the unlikely pair are thrown together to investigate the string of thefts perpetrated two different gangs of diamond thieves, and the more they work together, the harder it becomes to ignore their undeniable attraction to one another. But what will Craig think when he finds out why Kieran was really at the jewelry store that day? It's a problem she'll have to worry about after they get to the bottom of these crimes.

7. In the Waning Light by Loreth Anne White

For Meg, writing about true crime comes as second nature, as long as it isn't her own true crime she has to write about. A bestselling author with fame, money, and a wealthy fiancé all her own, Meg's life is perfect, and her sister's grisly attack and murder is buried in her past. But then a reporter prods her into writing about the tragedy that happened over two decades ago. Finally ready to face her deepest, darkest secret, Meg travels to her hometown of Shelter Bay to search for clues about her family's history and her sister's murder. But when she arrives, she finds more than she could have ever imagined. Her family's secrets are darker than she imagined, her sister's past more complicated than she knew, and to top it all off, her high-school sweetheart is more handsome than ever before. Meg can't ignore the sparks between them anymore than she can ignore the warning signs that someone is out there willing to do anything to keep her quiet. A dramatic, heart-thumping read, the only thing more tense than the suspense is the unspoken attraction between these two smart, sexy characters.

After Riley Lambert watcher her sister get abducted from her bedroom as a child, she swore she'd never be that helpless again. Now, 15 years later, she uses the painful experience of her past to motivate her to be the best FBI profiler in the game. And she uses her new career's resources to secretly search for her sister. That is, until an old flame from her past — the seductive Navy SEAL Thayne Blackwood — reaches out to her for help after his own sister has been kidnapped. But how closely connected is Thayne's current nightmare to Riley's dark past? As the lines get blurrier and blurrier, the pair must race against the clock (and against their feelings for each other) to try and save the people they care about most in this sexy, action-packed, nail-biting thriller that will keep your heart racing until the very last page.

When Samantha Parker returns to her hometown of Hidden Falls, she finds everything is exactly the way she left it after her brother's shocking murder nearly 20 years ago. Temporarily working as a teacher in town while she takes care of her mother's estate, Sam finds herself the center of gossip — that is, until Dr. Ethan McClane shows up, and all eyes are on him. A former resident of the town himself, Ethan is thrilled no one recognizes him as the troubled teen he used to be, and even more thrilled when he teams up with Sam to help a young teen in town. The two begin a tantalizing relationship, only to find out that their dark pasts may be more interconnected than they had ever thought. Will their secrets tear them apart, or is their love strong enough to survive — that is, if they can stay alive long enough to find out.