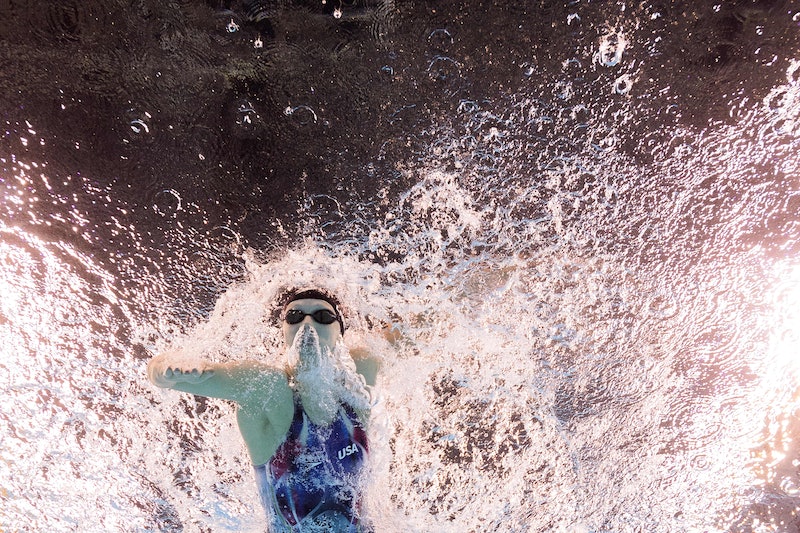 How many people can say they've beaten a world record? If you're 19-year-old Olympic swimmer Katie Ledecky, whose number of wins is nearly inconceivable, you can say you have — way more than once. Ledecky took home the gold medal at Sunday night's 400-meter freestyle competition, securing Team USA's first gold medal for swimming of this year's games. But it doesn't end there. Her win didn't just set the record for the competition — it set it for the world.

Ledecky dominated the competition, cruising through the 400-meter race in a mere three minutes and 56.76 seconds. Whose time did she beat? Her own, of course. In a preliminary on Sunday afternoon, Ledecky broke the previous Olympic record by two seconds — clocking in at three minutes and 58.71 seconds. Not content with setting just one world record in a lifetime — or even 24 hours — the swimmer bested her own time in the same day. Impressed yet? You should be. She also set the world record for the 800-meter and 1500-meter freestyle. At her alma matter, Stone Ridge High School of the Sacred Heart, Ledecky set every swimming record except one: the 100-yard breaststroke.

This is Ledecky's second gold medal. She won her first in the 800-meter freestyle at the 2012 Summer Olympics in London, where at just 15 years old, she was the youngest swimmer competing for Team USA.

During her most recent record-breaking race, Ledecky swam so quickly she had time to celebrate before the silver medalist, Great Britain's Jazz Carlin, finished the race.

"To see the 56 up there feels really good," she told The New York Times. Three minutes and 56 seconds was her goal — she wasn't aiming for anything above that. A 3:56 time had been her goal for the last three years, and she finally achieved it.

Ledecky has all the makings of a prodigy: incredible talent and an unbeatable work ethic. She practices nine times a week — for a total of 50 hours — and during practices alone, she swims the equivalent of 1,918 miles a year.

"Somewhere in the mental makeup, there is something the distance swimmers have that the others don't have," Bruce Gemmell, Ledecky's coach, told The Washington Post. "Something that makes them embrace the discipline required. Katie embraced it. She likes the repetition — the borderline monotony — of distance."

More like this
Jake Daniels Just Became The UK’s First Active Football Player To Come Out As Gay Since 1990
By Sam Ramsden
What Is Jeanie Buss' Net Worth? The Lakers President Is Uber Rich
By Hugh McIntyre
10 Swoon-Worthy Beauty Looks From The 2022 Cannes Red Carpet
By Olivia Rose Ferreiro
8 Mick Carter Moments That Made 'EastEnders' History
By Niellah Arboine
Get Even More From Bustle — Sign Up For The Newsletter