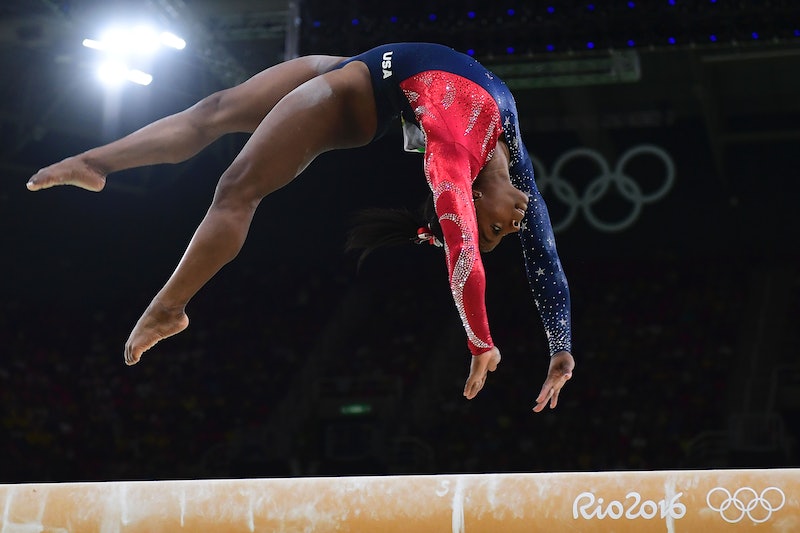 Just like the rest of the world, the Kardashian-Wests have been tuning into the Olympics and cheering on the athletes representing their country (stars really are just like us). In true Kardashian fashion, Kim Kardashian-West tweeted about Simone Biles, a 19-year-old Olympic gymnast — her and her daughter North's latest obsession.

The 4-foot-9 gymnast made her Olympic debut at this year's games in Rio, where she already received first place at the qualifiers for the women's floor exercise, beam, and vault — that's first place in three out of four qualifying competitions. Biles' first Olympic performance proves she's a force to be reckoned with. She's so good that U.S. team captain Aly Raisman admitted to The New York Times that, when competing against Biles, she'd be happy to come in second place.

Biles, who first became interested in gymnastics at the age of six, already has 14 world championship medals under her belt, and is likely to take home the gold at this year's games. As it turns out, she has at least two A-list fans, Kardashian-West and her daughter, North, a budding gymnast herself.

"North is watching @Simone_Biles in awe!" Kardashian-West wrote on Twitter. This isn't the first time the mother of two has shouted Biles out online; she previously wished Biles luck in a video. "We're all rooting for you back at home," she said.

Biles replied that she was obsessed with North (but really, aren't we all?). It looks like that obsession is mutual.

According to a 2007 diversity study by USA Gymnastics, the sport is almost entirely practiced by white gymnasts. Nearly 75 percent of gymnasts who were part of the Member Clubs of USA were white; only 6.61 percent were African-American and 3.63 percent were Latino.

That's why Biles is so influential: she's part of the most diverse U.S. women's gymnastics team in Olympic history — and she's its most talented member.

"When you see people like Gabby Douglas and Simone Biles, you know it's not a one-time thing," former gymnast Wendy Hillard told TIME.

Athletes like Biles and Douglas aren't only making gymnastics more diverse — they're dominating the sport, making them excellent role models for kids like North — among many, many others — who has recently started gymnastics classes. Maybe we'll catch her at the 2032 Olympics.